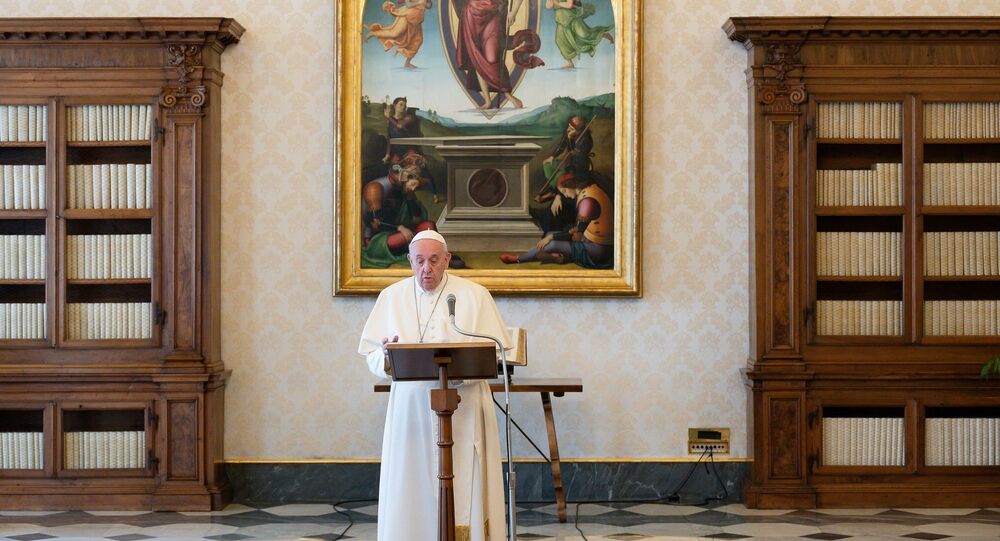 Pope Warns of 'Mafias' Around Globe Trying to Capitalize on Pandemic

The Pope has taken a tough stance against organized crime, supporting a Vatican initiative last year to separate Christian imagery from organized criminal groups, as many members of the Italian mafia regard themselves as a religious, cult-like organization, enlisting the aid of saints and performing initiation rites with religious statues.

Chief pastor of the Catholic Church, Pope Francis, reiterated his condemnation of organized crime, warning that "mafias" around the world were attempting to profit from the ongoing COVID-19 pandemic.

In his traditional Sunday address following the Angelus prayer, the Pope recalled his predecessors, Pope John Paul II and Pope Benedict XVI, who both condemned the mafia.

"St. John Paul II denounced their culture of death and Benedict XVI condemned them as a road of death. Mafias are present in various part of the world and, taking advantage of the pandemic, they are enriching themselves through corruption," the Pope said. "They exchange faith for idolatry."

The Pope urged the faithful to remember all mafia victims and renew their commitment to fighting these criminal networks.

"Today, let us remember all the victims and renew our commitment against mafias," the Pope added.

© REUTERS / FILIPPO MONTEFORTE
Italian Mafia Tells Ambulances to Stop Using Sirens as They Scare Off Drug Dealers - Report
Last April, on Holy Wednesday, Pope Francis made a special prayer at the Vatican for those who, in the difficult times of the pandemic, profit from people in need, such as mafiosi and money lenders. The Bishop of Rome also asked God to "touch their hearts" and convert them to faith.

On Sunday, Italy marks the Day of Remembrance for the Innocent Victims of the Mafia, established in 2016. The day is dedicated to the problem which has been afflicting Italy, and much of the world, for centuries.

The Pope has repeatedly addressed the issue of the need to fight the mafia and corruption. In June 2014, during a pastoral trip to Calabria, he stated that the mafiosi were excommunicated.

“Criminal networks will also be targeting unsuspecting members of the public via fake websites and false cures, which could pose a significant risk to their health, even their lives," Jurgen Stock, Interpol's Secretary-General was quoted in the press release as saying. "It is essential that law enforcement is as prepared as possible for what will be an onslaught of all types of criminal activity linked to the COVID-19 vaccine, which is why INTERPOL has issued this global warning.”

Italy’s Most Wanted: Mafia Fugitive Who Has Spent 27 Years On The Run For Bombings Jailed For Life