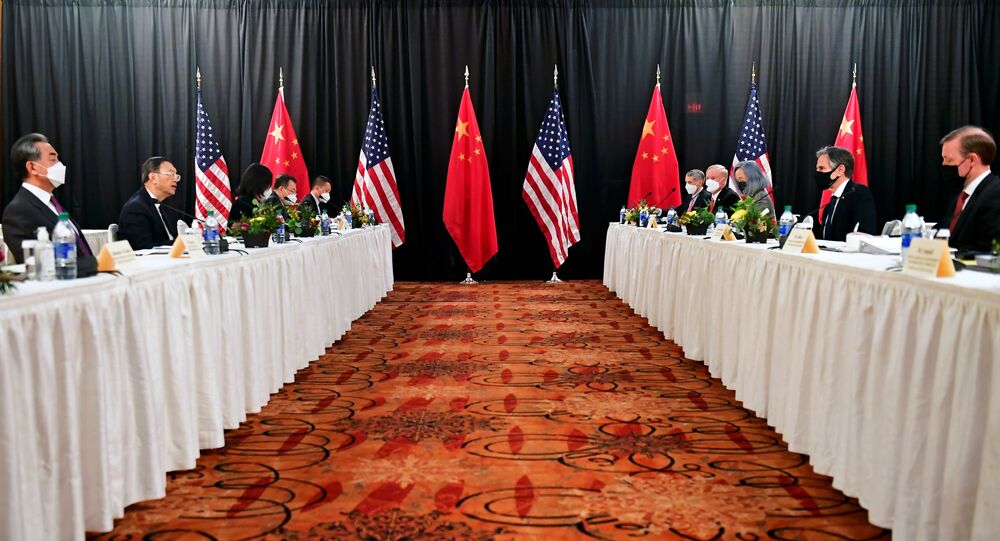 BEIJING (Sputnik) - The scandal at the US-China talks in Anchorage, located the US state of Alaska, is just a beginning, the most essential part is yet to come, Zhao Lijian, the Chinese foreign ministry spokesman, said on Friday.

Both sides accused each other of breaking protocol guiding the talks. According to the reports based on video fragments of the meeting, the US opening speech lasted five minutes instead of agreed four, China's - 23 minutes.

"We think that this dialogue is a good chance for strengthening contacts between the countries, settling contradictions and developing cooperation ... The Chinese side commits to frank and constructive approach to this dialogue. Having arrived in Alaska, the Chinese delegation felt not only Alaska's cold climate but also the ethics of the US hosts' attitude to the guests. This opening speech was only a snack, the main meal is yet to come, this will be the most essential part," the spokesman said during the briefing.

Answering a question why China's speech lasted for more than 20 minutes and still accused the US of violating protocol, Zhao said that it was a response to "the serious violation of time limit by the US delegation."

The second session ended late on Thursday and the sides are expected to continue their talks on Friday.

On Thursday, US Secretary State Anthony Blinken and National Security Adviser to the US President Jake Sullivan held first meetings with two senior Chinese diplomats — Director of the Office of the Central Committee for Foreign Affairs Yang Jiechi and Foreign Minister Wang Yi in Anchorage, the US state of Alaska. The first session began with harsh criticism of Beijing by Blinken and Sullivan. According to Politico, the US officials criticized China for Hong Kong events and the alleged genocide against Uighur Muslims in China’s Xinjiang region. Their Chinese counterparts responded by blaming the US for hypocrisy.