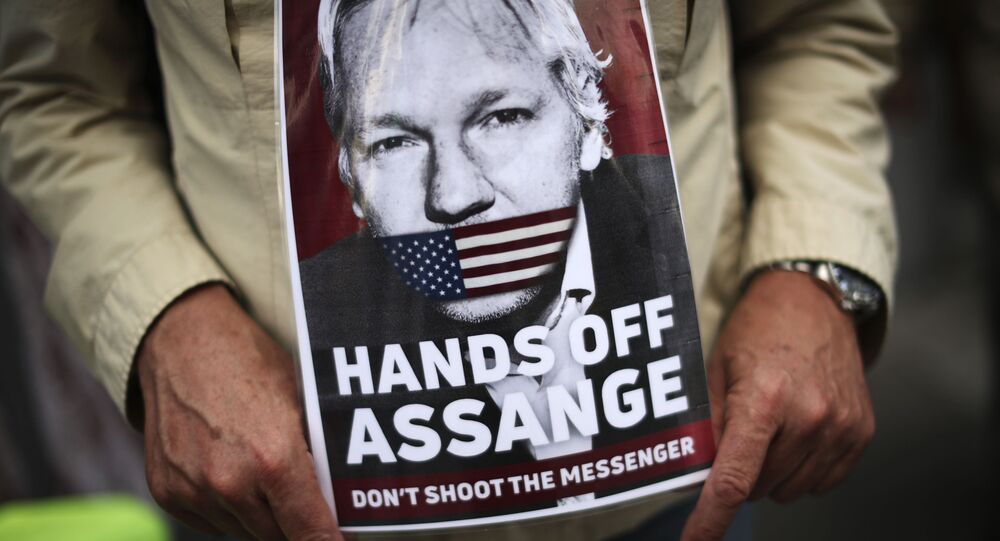 Julian Assange’s fiancée, Stella Morris, went on Twitter on 17 March to denounce a hoax that had reported the unconfirmed death of the Wikileaks whistleblower.

Morris wrote that she had ‘gone through hell’ after seeing the post, a screenshot of which she attached to her tweet.

Julian just spoke to his solicitor. He is okay.

But I've just been through hell.

If this account really belongs to Ecuador's new Foreign Minister I demand an explanation. pic.twitter.com/SpLeiLSqQp

​A Twitter account allegedly belonging to Ecuador’s new foreign minister Manuel Mejía Dalmau had cited unconfirmed reports by ‘diplomatic sources in London’ as saying that the Wikileaks founder had died.

Morris was quick to dismiss the rumour, confirming that Julian Assange had spoken to his lawyer Gareth Peirce to make known that he was “okay”.

While it is currently unclear who could be behind the fabricated report, Stella Morris demanded an explanation from the alleged owner of the offending account.

It has also been noted that Ecuadorian President Lenin Moreno, who announced on 16 March that Manuel Mejia Dalmau, who served as the Ambassador to Germany, would become the Ecuadorian Foreign Minister, had referenced a different Twitter account in a post on Monday. In it, he extended congratulations to Mejía Dalmau on his promotion.

​On the day, Moreno tagged the tweet-protected account @MANUELMEJIAD, set up in November 2010.

The account featured photos of Mejía Dalmau wearing a blue-grey suit with a purple tie, just like the pics featured in the account that shared the alleged reports of Assange’s passing. The later account had been created in February 2021 and followed 1,973 users, while its own follower count included 234 users.

Netizens went online to extend their support to Julian Assange’s partner and voice the hope that his incarceration will end.

Should sue the account holder - it's the only way to send a message to them. Find out who they are - expose them.

That was heartwrenching to see.

People out there are playing such evil games.

It doesn't look like a verified account. Are you sure that it wasn't created by someone else with bad intentions?

I am so sorry these psychological games are being played on you and your family Stella.

We continue to fight to #FreeAssangeNOW ✊#WeAreAllAssange#TeamAssange

​Multi-award winning journalist Julian Assange currently remains in pre-trial decision at London’s Belmarsh prison, charged for his role in obtaining and publishing national defence documents in 2010 and 2011, which revealed, among other things, war crimes committed by US forces in Iraq, Afghanistan and Guantanamo Bay, Cuba. He faces a maximum of 175 years in prison if found guilty.

Earlier, his extradition to the US to face espionage and hacking charges was blocked in January after Judge Vanessa Baraitser ruled the Wikileaks founder’s life would be at risk.

Baraitser cited evidence presented about Assange’s mental health to argue that it would be “oppressive to extradite him to the United States” on 18 counts of espionage-related charges.

US President Joe Biden’s administration plans to continue to seek to extradite WikiLeaks founder Julian Assange from the United Kingdom to the United States to face hacking conspiracy charges, the Justice Department said, to challenge the British judge’s ruling.

After the US government signalled that its plans, Stella Morris, the fiancée of the whistleblower, launched a Crowdfunder account to pay for the legal costs of defending against the appeal.

​Earlier, the judge also refused to grant Julian Assange bail, whilst sitting at Westminster Magistrates' Court on 6 January 2021, on the grounds that the Australian publisher had previously violated prior bail conditions in 2012.

The Wikileaks founder has been locked up in the UK since April 2019, when the Ecuadorian government that had granted him asylum in its London embassy rescinded that offer, allowing British police to physically remove him from the premises.