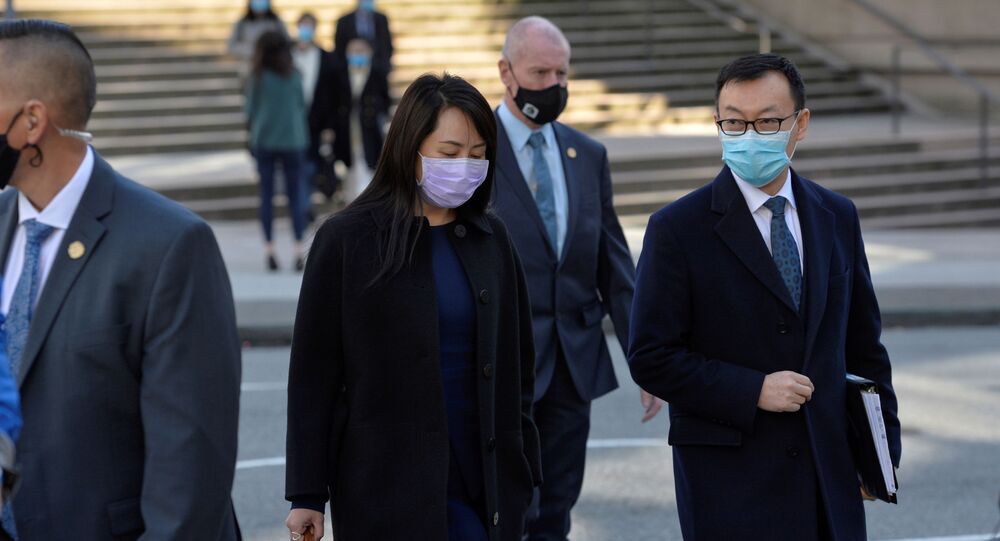 Extradition hearings against Meng resumed on Thursday, with the executive’s defense team arguing that misconduct on the part of Canadian authorities is in line with the "second branch" of abuse of process.

During the arrest at Vancouver’s International Airport, Canadian Border Services Agency (CBSA) agents sealed the executive’s mobile devices in special bags, designed to prevent remote wiping, and transferred it to the Royal Canadian Mounted Police (RCMP) but not before a border agent obtained the passcodes to the phones from Meng and placed them in the bags.

“Why would you need the passcodes,” Defense attorney Tony Paisana asked British Columbia Supreme Court Justice Heather Holmes, elaborating that the bags were not to be unsealed before the transfer.

“That context, coupled with the timing, minutes before she’s about to be turned over to the RCMP, we say indicates that the purpose of this act – the compulsion of her passcode – would be to ultimately share it with the one party that would care, the FBI,” Paisana said.

© Sputnik / Alexei Druzhinin
Two Years On, Arrest Of Huawei's Meng Still Tests Canada's Political Wisdom
In earlier hearings, Canadian officers testified that the passcodes to the Huawei executive’s phones were obtained just moments before her arrest. CBSA officer Scott Kirkland told the British Columbia Supreme Court in October 2020 that he placed the passcodes to the phones – in violation of procedure – in error. Paisana told the court it is his belief that Kirkland was “untruthful” in his testimony.

The defense attorney also rejected the notion that the agents were inexperienced or made trivial errors, saying the officers in question had previously participated in the extradition process and their internal discussions indicated they were knowledgeable about the mandate they possessed. Additionally, Paisana quoted earlier testimony which revealed that supervising officers ordered that their transgressions not be documented.

Meng, the daughter of Huawei founder and CEO Ren Zhengfei, was arrested on December 1, 2018 at Vancouver International Airport during a layover stop at the request of the US government.

Meng is wanted by US authorities for her alleged role in violating sanctions against Iran. The Justice Department alleges that Meng committed financial transgressions by misleading multinational financial conglomerate, HSBC, into approving more than $100 million in transactions that contravened US sanctions on Iran from 2010 to 2014.

The arrests of Meng and two Canadian nationals - diplomat Michael Kovrig and businessman Michael Spavor – on charges of espionage in China, along with other disputes have reduced bilateral relations between the two countries to their lowest point in years.

The trial of the "two Michaels" – as the pair is referred to at home – will begin on Friday, Foreign Minister Marc Garneau revealed on Wednesday.

Both nations view the detention of their nationals by the other as political incidents.

The hearings in this extradition case are expected to conclude in mid-May.

Meng remains under house arrest in Vancouver, although she is free to traverse the region in the company of state-imposed guards outside of her 11:00 p.m. to 6:00 a.m. curfew.