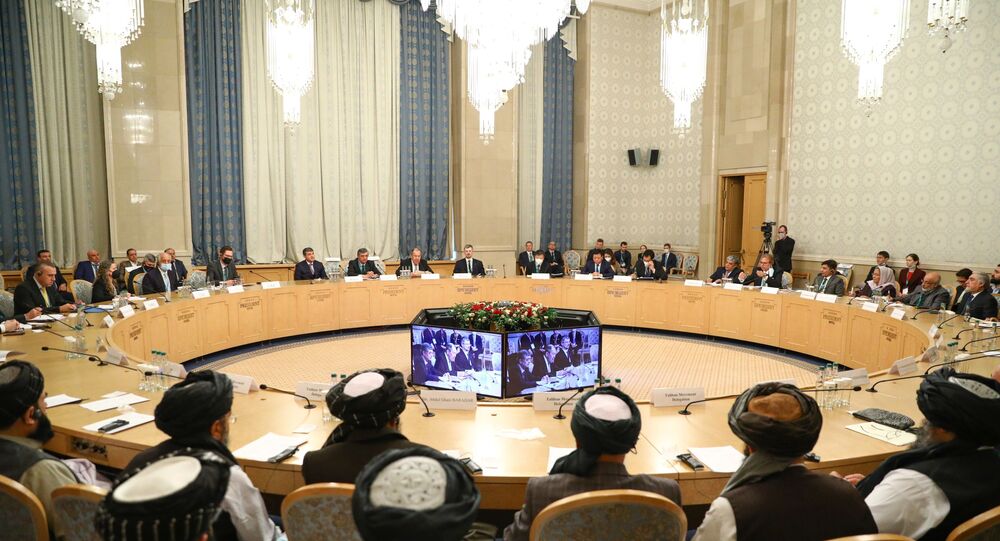 MOSCOW (Sputnik) - The extended Troika, which includes Russia, the United States, China and Pakistan, urges the Taliban Movement and the Afghan government to ensure that terrorist groups are unable to threaten other countries from the Afghan territory, according to a statement adopted at the Moscow conference on Afghanistan on Thursday.

"We call on all Afghans including the Government of the Islamic Republic and the Taliban to ensure that terrorist groups and individuals do not use Afghan soil to threaten the security of any other country", the statement read.

The Troika also called on the Afghan government and the Afghan High Council for National Reconciliation to engage in talks with the Taliban movement regarding a settlement to the conflict.

"As stated in the UNSC [UN Security Council] resolution 2513 (2020), we do not support the restoration of the Islamic Emirate and we all on the Government of the Islamic Republic and the High Council for National Reconciliation to engage openly with their Taliban counterparts regarding a negotiated settlement", Russia, the United States, China and Pakistan said in a joint statement after the international negotiations in Moscow.

The negotiators urged the Taliban Movement and the Afghan government to "immediately" engage in discussions on fundamental issues to resolve conflict.

"At this pivotal moment, our four states call on the parties to negotiate and conclude a peace agreement that will bring an end to over four decades of war in Afghanistan", the statement read.

© AFP 2021 / SHAH Marai
Afghan Gov’t Preparing for Whatever Decision US Takes on Troop Pullout, Official Says
They also urged the warring parties in Afghanistan to reduce violence and create an environment for a political settlement to the conflict.

Moscow hosted a high-level meeting on Afghanistan on Thursday, marking a restart of global efforts to revitalise the Kabul-Taliban talks in Doha and setting the scene for a US-sponsored conference in Turkey.

The negotiations between the sides in the Afghan conflict intensified a year ago when the US and the Taliban signed a peace agreement in Doha in a bid to end the decades-long conflict. However, the talks have been slow in progressing.