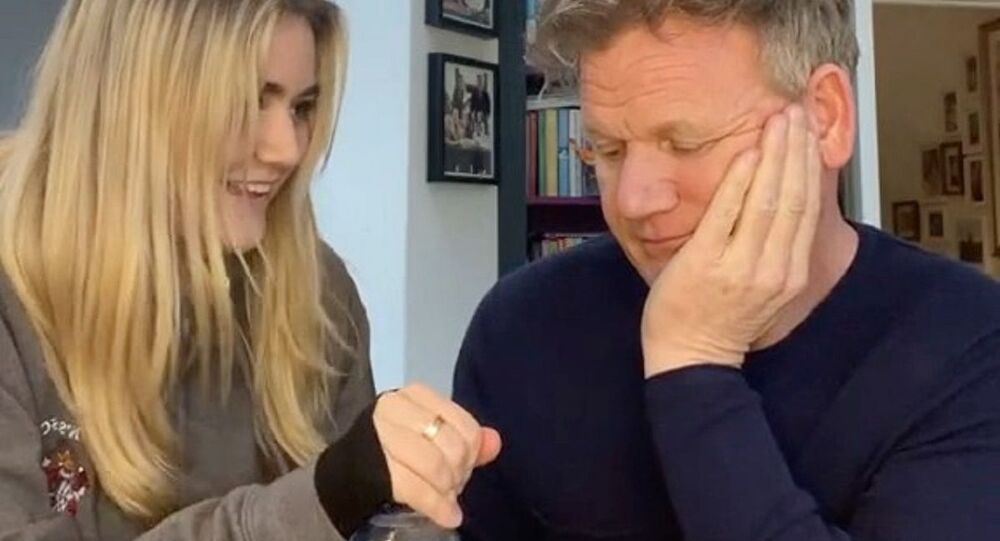 Famed British chef, restaurateur, and television personality Gordon Ramsay, 54, is making the best use of the COVID-19 pandemic by spending time with his entire family in Cornwall, England. He and his 19-year-old daughter Tilly Ramsay have been sharing glimpses of it through hilarious TikTok videos.

Netizens are having a good laugh-out-loud moment watching celebrity chef Gordon Ramsay being tricked by his daughter Tilly Ramsay and getting a raw egg smashed on his head after being splashed with water in his face.

Tilly tricked Gordon as she pretended to show him magic and recorded the entire prank, which was posted by Gordon on his Instagram account.

In the video, Tilly can be seen performing a trick and makes a raw egg placed on top of a bottle of water disappear by swiftly moving it away with the other hand. Stunned by her act, Gordon leans over and peeps inside the bottle. Tilly then squeezes it, splashing his face with water and slamming the egg on his head.

She quickly runs away to save herself, leaving Gordon in splits over being caught in her trap.

She posted it on TikTok and aptly captioned it: "I'm still running far far away".

With over four million likes, the video has gone viral and is getting a lot of hilarious reactions from netizens.

One user commented, "Tilly got you good! Can't believe you fell for that! Cracked me up". Another wrote, "Literally dead".
"It's the only person in the world that can do that without being cooked", said a third.