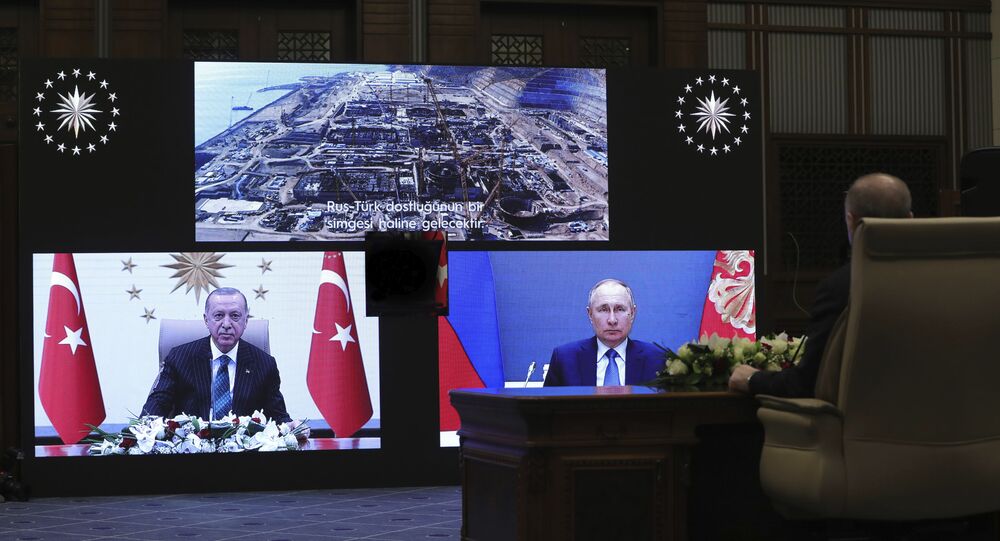 MOSCOW (Sputnik) - The Akkuyu NPP is Turkey's first-ever nuclear power plant. It will have four nuclear units equipped with Russian-designed generation 3+ VVER reactors with the capacity of 1200 megawatt each. Rosatom oversees the construction of the NPP.

They pressed symbolic red buttons symbolising the start of the construction in Turkey. The event was held via a video format.

According to Turkish President Recep Tayyip Erdogan, the construction of the fourth power unit of the Akkuyu nuclear power plant will begin in 2022.

"Today we are experiencing a day of pride together, we are starting to build the third power unit. Next year, we will start building the fourth. This is an important step from the point of our energy security. I hope the nuclear power plant will give us cheap and reliable energy. As many as 186 students have already successfully studied and returned to Turkey. Akkuyu NPP will give a new impetus to the development of our economy", Erdogan said, speaking via videoconference at the launch ceremony of the third power unit construction.

Putin and Erdogan Agree to Meet

Russian President Vladimir Putin agreed to meet with Turkish President Recep Tayyip Erdogan in person, adding that they have not seen each other for a long time and this must be done "in the near future."

"Turkey intends to continue cooperation with Russia on major regional problems such as Syria, Libya, Karabakh. I hope we will be able to meet in person soon," Erdogan said, addressing Putin via video link.

"Agreed. We haven't seen each other for a long time, we need to do this in the near future," Putin replied.

The successful implementation of the Akkuyu Nuclear Power Plant (NPP) in Turkey will bring Ankara-Moscow energy cooperation to a new level, Putin added.

"The flagship project will not only bring bilateral cooperation in the energy sector to a qualitatively new level, but, in general, will further promote the multi-field Russian-Turkish partnership, strengthen friendship and mutual understanding between the people of our countries", Putin said.

© AFP 2021 / IBRAHIM MESE
A view of the construction site of Turkey's first nuclear power plant 'Akkuyu', pictured during the opening ceremony in the Mediterranean Mersin region on April 3, 2018. - Turkish President Recep Tayyip Erdogan and Russian counterpart Vladimir Putin launched the construction of the $20 billion dollar Akkuyu nuclear power plant though a video link from Ankara where Putin is on an official visit.

The Russian president also said that joint Russian-Turkish efforts made the construction of the Akkuyu NPP in accordance with the agreed schedule possible despite the COVID-19 pandemic.

"Even the well-known difficulties related to the coronavirus pandemic could not prevent the consistent implementation of the Akkuyu project", Putin said.

Russia and Turkey agreed in 2010 that a Rosatom subsidiary will build the nuclear plant. The third reactor was granted construction authorisation in November.

There are plans to build a total of four reactors with a combined generating capacity of 4,800 megawatt.