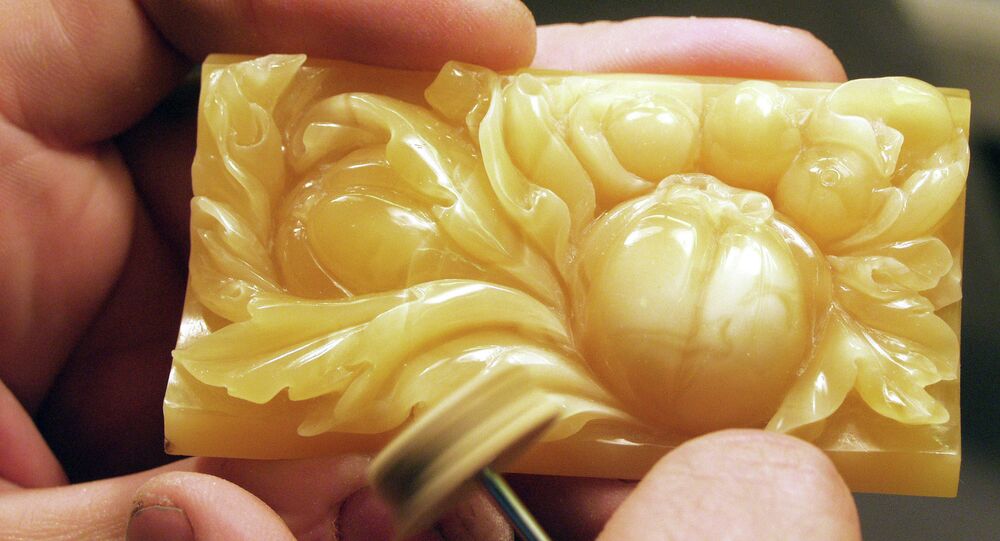 'Amber Room': Can Russia's 'Eighth Wonder of the World' Lost in World War 2 Still Be Recovered?

The Amber Room, the 18th century art work, was installed in Russia as a gift to Tsar Peter the Great from Prussian King Frederick William I. However, the chamber mysteriously disappeared after Nazi looting.

The fate of Russia's lost Amber Room, which was once described as the “Eight Wonder of the World,” remains a mystery, with some historians doubting that it will ever be recovered.

The stunning 18th-century chamber decorated in amber was assembled in Catherine Palace in Tsarskoye Selo, a royal residence not far from St. Petersburg, after being gifted to Russia by Prussian King Frederick William I.

An expert from the Amber Room Museum, Tatyana Suvorova, explains: “According to the law, appropriation of amber even collected on the beach, was strictly punished, even leading to execution.”

“That’s when amber acquired its value,” she told the BBC Reel programme, which delved into the chamber’s history.

“The 16th to 19th centuries were a flourishing time for amber processing when aristocratic objects were made from this ‘sun stone.’”

© Sputnik / Dmitry Korobeinikov
Restoration of the renowned Amber Room in the Catherine Palace of the Tsarskoye Selo state museum reserve in Pushkin outside St. Petersburg

But the Amber Room suffered a tragic destiny. In 1941, it was looted by Nazi Germany's Army Group North and transported to the former German city of Konigsberg, present-day Kaliningrad, and erected in Konigsberg Castle, where it remained on display until 1944.

“Konigsberg was a transfer base for looted cultural objects, which would be stored in the city for further transportation to other parts of Germany,” says Anatoly Valuev, a researcher from the Kaliningrad History and Arts Museum.

But as the city was engulfed by fire at the end of World War 2, the room mysteriously vanished.

What Could Have Happened to the Artwork?

“As the Red Army approached the borders of the Third Reich, a large-scale evacuation of these objects and the preparation of special hidden storage locations began,” Valuev says.

But Russian soldiers and historians failed to find any trace of the room – there was a theory that it could have been completely destroyed in the bombings. But this assumption doesn't stand up to scrutiny, Valuev believes.

“No traces of burning amber were found and it was assumed that the room survived after all and it was hidden in the castle’s basement or it was taken somewhere else,” the expert explains.

“Two former Wehrmacht soldiers wrote that, just before the assault on the city, they lowered big boxes into the deep basement of the castle.”

However, Soviet and then Russian scientists undertook two major operations after WW2 to try and find the room underneath the castle’s remains with the help of radar but to no avail – only small artefacts and jewellery were unearthed.

Russian historian Konstantin Zalessky believes that there's no chance the precious chamber will be found in Kaliningrad’s grounds – even if it was initially hidden there, the delicate amber would have now been destroyed by the natural forces.

Another historian, Alexander Shirokorad, makes an even bolder claim about the room’s destiny – he says that there's a chance the amber artwork was transported out of Germany by American soldiers when the Soviet army was approaching Konigsberg.

Suvorova thinks that even if the Amber Room was to be found, despite being “the greatest happiness," the chamber's fragile nature means it's unlikely to have been preserved as "a work of art" – instead it would be "a fact of history...because such artworks made of a fragile material require very delicate handling."

After 23 years of scrupulous work, architects and historians were able to re-create the legendary Amber Room at Catherine Palace, which opened to visitors in 2003.