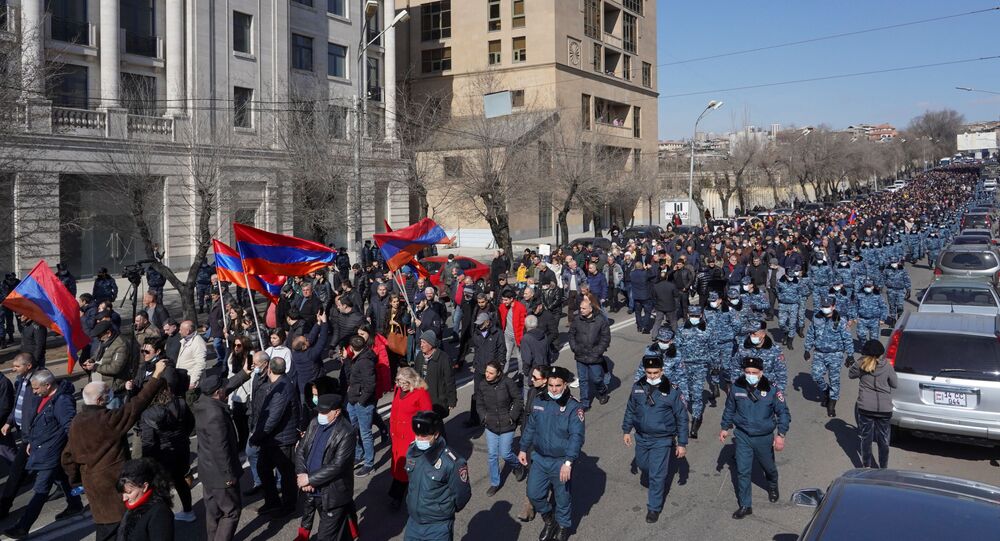 YEREVAN (Sputnik) - Armenian President Armen Sarkissian will not sign a decree on the dismissal of General Staff Chief Onik Gasparyan, and, in this case, the decision will enter into force automatically under the country’s constitution, the president’s office said on Tuesday.

"The president of the republic decided not to sign the draft decree", the press office said.

A political crisis erupted in Yerevan after the deputy chief of the Armenian general staff mocked Prime Minister Nikol Pashinyan's controversial comment about the alleged failure of Russian-supplied Iskander missiles during the conflict in Nagorno-Karabakh. This triggered a series of military dismissals.

The armed forces issued a statement demanding the resignation of Pashinyan himself, the prime minister regarded this as an attempted coup and called on his supporters to take to the streets.

At the same time, the Homeland Salvation Movement, which unites 20 political forces and calls on Armenian Prime Minister Nikol Pashinyan to resign, said the president’s decision is "extremely concerning".

"In the statement, the head of the country [Sarkissian] bypasses the issue of appealing the relevant decision of Nikol Pashinyan [on the dismissal of Gasparyan] in the Constitutional Court. Based on the above, representatives of the Homeland Salvation Movement demand an urgent meeting with the president", the opposition forces said in a statement.

According to the constitution, the president can return a decree with his objections to the prime minister, who has requested a dismissal of a high-ranking military official, within three days.