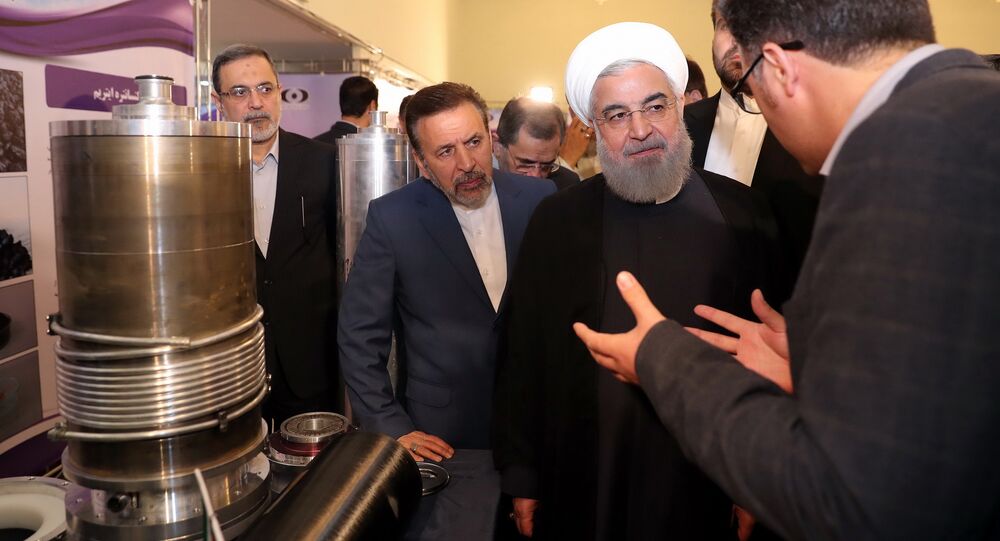 Tehran formally scrapped its voluntary adherence to the International Atomic Energy Agency's Additional Protocol on Monday after the expiration of a deadline set by Iran's parliament for other parties to the Iran nuclear deal to meet their obligations. The protocol had allowed the IAEA to carry out snap checks of the country's nuclear facilities.

IAEA director-general Rafael Grossi has called on Iran to explain traces of nuclear material including uranium which he said to had been found at suspected undeclared nuclear facilities.

"A number of points where Iran needs to reply and to give us answers - on particles of uranium and other materials which have been found on places where they shouldn't be," Grossi said. "The process is ongoing and it has not yielded positive results for now. So, this is an activity that continues and I will be reporting about that next week when the Board of Governors of the IAEA meets for their spring session."

Grossi made the comments on Tuesday in a Zoom seminar hosted by the Nuclear Threat Initiative, a Washington, DC-based non-profit.

During the conference, the IAEA chief also described a "black box"-style deal he said had been reached between the IAEA and Tehran over the weekend to allow for continued monitoring of Iran's nuclear activities, but in a delayed fashion.

"This is a system that allows us to continue to monitor and to register all the key activities that are taking place throughout this period so that at the end of it we can recover all this information," Grossi said. "In other words, we will know exactly how many components were fabricated, exactly how much material was processed or treated or enriched and so on and so forth."

Also on Tuesday, France, Germany, and the UK, the three Western European parties involved in the 2015 Iran nuclear agreement, also known as the Joint Comprehensive Plan of Action (JCPOA), issued a joint statement confirming that Iran had suspended the Additional Protocol and other transparency measures under the JCPOA. It also calls on Tehran to "reverse all measures that reduce transparency" and return to full and timely cooperation with the IAEA.

Saying they "deeply regret" Iran's "dangerous" decision, the E3 claimed that "Iran's actions are a further violation of its commitments under the JCPOA and significantly reduces safeguards oversight by the IAEA."

Earlier in the day, Iranian Foreign Minister Mohammad Javad Zarif tweeted that the Islamic Republic's decision to halt voluntary implementation of the Additional Protocol was "fully compatible" with the JCPOA amid the US's continued violation of the agreement, and the E3's continued failure to meet their own obligations.

Zarif stressed that Iran's "remedial measures" remain "reversible" if the US terminates its illegal sanctions and rejoins the JCPOA.

On the campaign trail, Joe Biden promised a swift reversal of the Trump administration's May 2018 decision to pull out of the JCPOA. Iran responded to the promise with guarded optimism. A month into his administration, Biden has failed to make good on his commitment, instead insisting that Iran must bring its nuclear enrichment and stockpiling activities back into line with limits outlined in the JCPOA.

© REUTERS / POOL
Israel ‘Will Do Everything’ to Prevent Iran Getting Nuclear Weapons, Netanyahu Says
Tehran maintains that because it was the US side which terminated its commitment to the agreement, it falls on Washington to remove all of its sanctions against Iran first.

The Western European signatories to the JCPOA have joined Washington in calling on Tehran to live up to its commitments. Tehran has countered by saying that these countries have failed to come up with the promised financial and trade mechanism which would have allowed the Islamic Republic to avoid crushing US sanctions following Trump's withdrawal from the agreement in 2018.

The JCPOA limits Iran's uranium enrichment to 3.67 percent fissile purity. In January, the country's nuclear agency announced that enrichment had been increased to 20 percent. On Monday, Iran's Supreme Leader Ayatollah Ali Khamenei said the country might continue enriching uranium up to 60 percent. Weapons-grade uranium is enriched to 90 percent.

Iran maintains that it has no intention of pursuing nuclear weapons, relying instead on its massive conventional ballistic and cruise missile arsenal to deter potential aggression. Ayatollah Khamenei has issued a fatwa (religious ruling) banning the pursuit and development of nuclear weapons. His predecessor, Ayatollah Ruhollah Khomenei, founder of the Islamic Republic, issued a similar fatwa during the Iran-Iraq War, prohibiting Iran from responding in kind to Iraqi chemical attacks against Iranian soldiers and cities. Iran ended up eliminating its chemical weapons arsenal in the mid-1990s, and has called on other countries including the US to do the same.