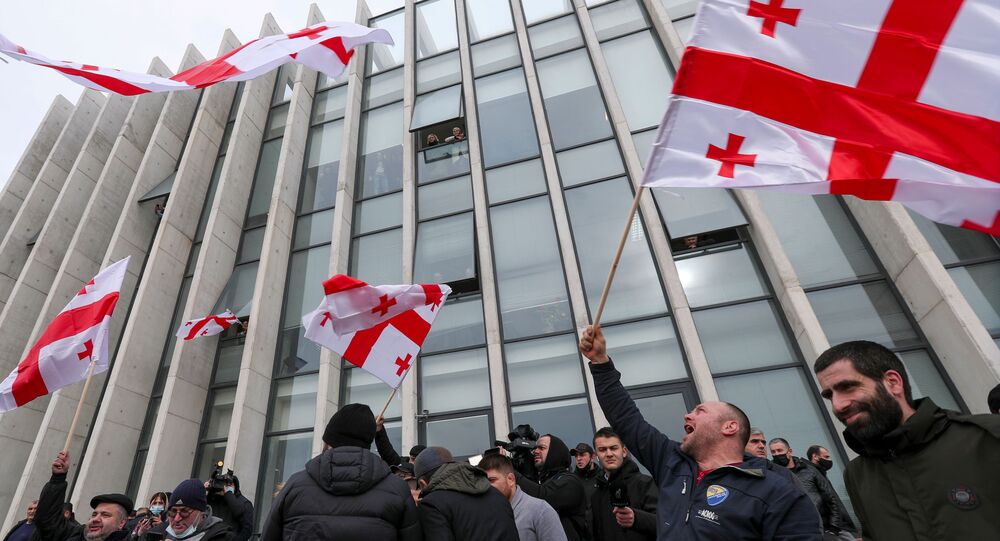 TBILISI (Sputnik) - The representatives of the Georgian opposition parties and their supporters have taken to the streets near the government chancellery in Tbilisi to protest the detention of the leader of the United National Movement (UNM) party, Nika Melia, a Sputnik correspondent reported on Tuesday.

Earlier in the day, former first Deputy Foreign Minister Giga Bokeria and former chairwoman of the Georgian Parliament Nino Burjanadze warned that they would hold protests to demand Melia's release and a fresh general election.

"We will not give up and will fight to the end for Nika, for the opposition, for freedom and independence. Nobody will return us to the past," Khatia Dekanoidze, an opposition member and former chief of the Ukrainian National Police, told journalists.

First photos from the rally have been shared on Twitter.

The tents are set up. #Rustaveli Avenue is blocked. #Georgia #Tbilisi #GeorgiaCrisis pic.twitter.com/RgNTEfEaIX

​Prior to his detention on early Tuesday, Nika Melia was briefly arrested for leading protests back in June 2019 and later released on 30,000 Georgian lari ($9,063) bail. He was forced to wear a monitoring bracelet but removed it publicly during another wave of opposition protests, which erupted in November 2020 in non-recognition of the general election results. This prompted the court to revise the conditions of Melia's release and impose a new bail, totalling 40,000 lari. The UNM chairman has refused to pay the bail.

This morning, police stormed the UNM party office and detained Melia and over a dozen other activists. The UK and US missions criticized the detentions and called on the Georgian government to restrain from violence.