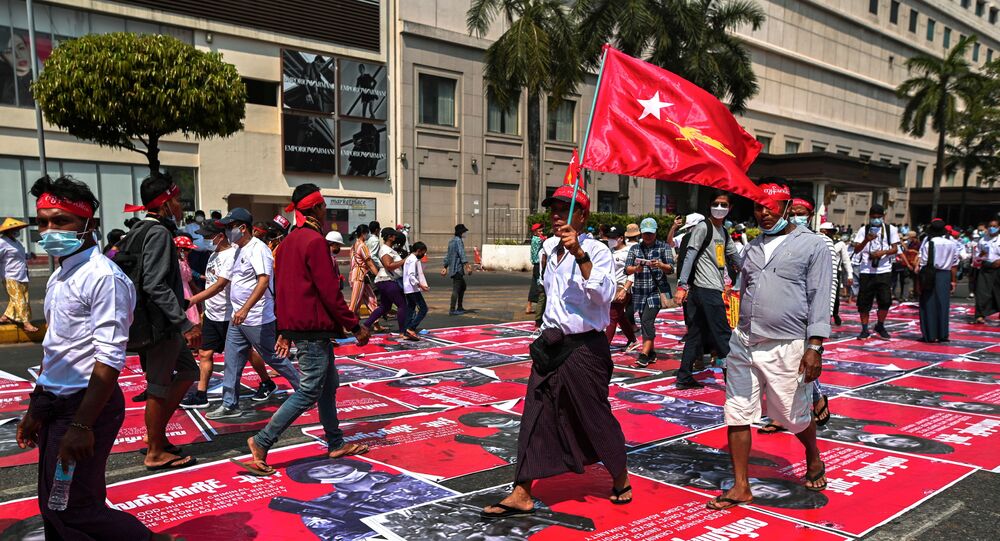 On 1 February, Myanmar's military seized power, announcing a one-year state of emergency and vowing to take action against alleged voter fraud during the 8 November general election, which was won by Aung San Suu Kyi's National League for Democracy party.

Britain's Foreign Office has summoned Kyaw Zwar Minn, Myanmar's ambassador to the UK, as his country is swept by anti-coup protests which are reportedly being violently supressed by the military.

A foreign office spokesperson called for the end of hostilities.

"The Minister for Asia condemned the response by the Myanmar Security Forces to the peaceful protests. He stressed that the use of violence and force against protesters, which has already led to death and serious injury, was completely reprehensible and must stop", the spokesperson stated referring to Nigel Adams, UK Minister of State for Asia.

© AP Photo
'We Are Not Prepared to Stand By': Germany Warns Myanmar May be Sanctioned as 'Ultima Ratio'

Earlier in the day, UK Foreign Secretary Dominic Raab urged the UN Human Rights Council to tackle alleged human rights violations in a number of nations, including Myanmar. Raab called on the Burmese military to step aside and release detained officials.

Earlier in the month, Myanmar’s military overthrew the government and declared a year-long state of emergency hours before the newly elected parliament was due to convene. State Counselor Aung San Suu Kyi and President Win Myint, along with other top officials accused of election fraud, have been placed under house arrest.