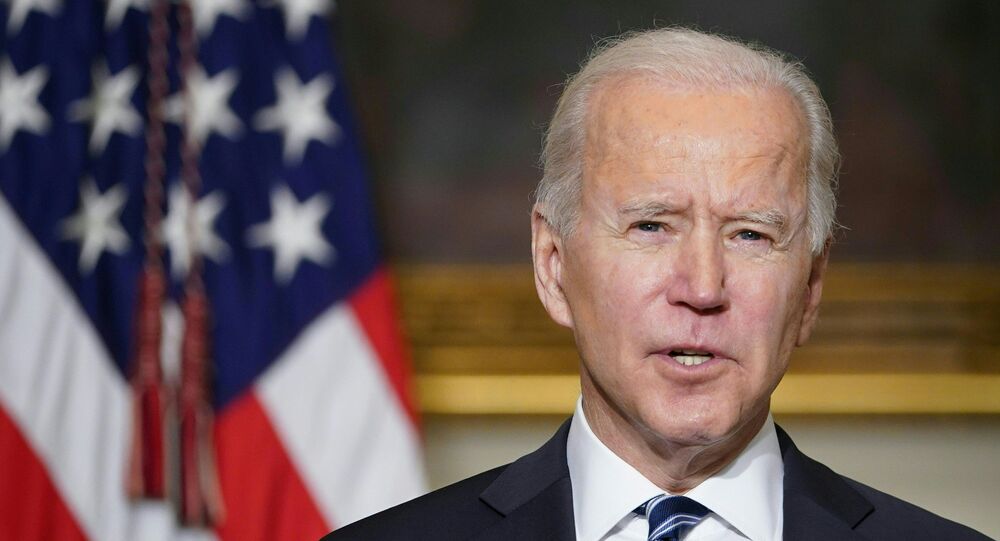 Earlier on Sunday, Iran's Supreme Leader Ayatollah Ali Khamenei said that since it was the US side which had violated its obligations under the Joint Comprehensive Plan of Action (JCPOA) nuclear deal by withdrawing from the agreement, it is up to Washington to remedy its mistake by lifting all sanctions against Iran.

The United States will not lift sanctions against Iran as a means to resuming negotiations, and Tehran needs to stop its uranium enrichment activities first, President Joe Biden has indicated.

Speaking to CBS Evening News on Sunday, and asked whether the US would lift its crushing sanctions against the Islamic Republic "to get Iran back to the negotiating table," Biden answered simply "No."

"They'd have to stop enriching uranium first?" his interviewer probed, prompting Biden to nod in agreement.

Later, an unnamed senior US official clarified to Reuters that Biden meant to say that Iran must stop enriching beyond the limits set under the JCPOA.

© AP Photo / Vahid Salemi
Iran Nuke Deal: Compensation Was Never Pre-Condition for Agreement's Revival, Zarif Says
Despite post-election hopes that Biden would take immediate steps to rejoin the JCPOA to ease tensions with Tehran, the new administration has failed to reach agreement with its Iranian counterparts on which side should be the first to make concessions. Tehran insists that it is up to the US side to lift its sanctions, given that it was Washington with abrogated its obligations and pulled out of the accord in 2018. The US side maintains that Iran must first signal its commitment to the JCPOA by scaling back its uranium enrichment and stockpiling activities.

Chinese Leader 'Doesn't Have a Democratic Bone in His Body'

In the interview, Biden was also asked about his administration's approach to China, and said that while he expects to see "extreme competition" with Beijing, the US is not going to push it into open "conflict."

"I probably spent more time with Xi Jinping, I'm told, than any world leader has, because I had 24, 25 hours of private meetings with him when I was vice president. Traveled 17,000 miles with him. I know him pretty well," Biden boasted.

"He's very bright. He's very tough. He doesn't have  -and I don't meant it as a criticism, just the reality – he doesn't have a democratic, small D, bone in his body. But he is – the question is, I've said to him all along, that we need to not have a conflict. But there's going to be extreme competition. And I'm not going to do it the way that he knows. And that's that's because he's sending signals as well. I'm not going to do it the way Trump did. We're going to focus on international rules of the road," the US president added.

The US sent a carrier strike group led by the USS Roosevelt into the South China Sea area for "routine operations" late last month, almost immediately after Biden's 20 January inauguration. Also in January, Biden Pentagon chief Lloyd Austin vowed that Washington would help Tokyo defend the Senkakus – a Japanese-controlled archipelago of uninhabited islets and rocks situated in the East China Sea and also claimed by Beijing.

This week, the US Navy destroyer USS John S. McCain passed through the Taiwan Strait on a 'freedom of navigation' mission, becoming the first US warship to make the journey through the contested waterway since Biden took office. Beijing blasted the manoeuvre as an "old trick" aimed at 'manipulating' the cross-Strait situation, and stressed that the US warship had been "tracked and monitored" throughout its journey. The People's Republic considers Taiwan to be a wayward province, and maintains a course to reunifying the island with mainland China at some point in the future.