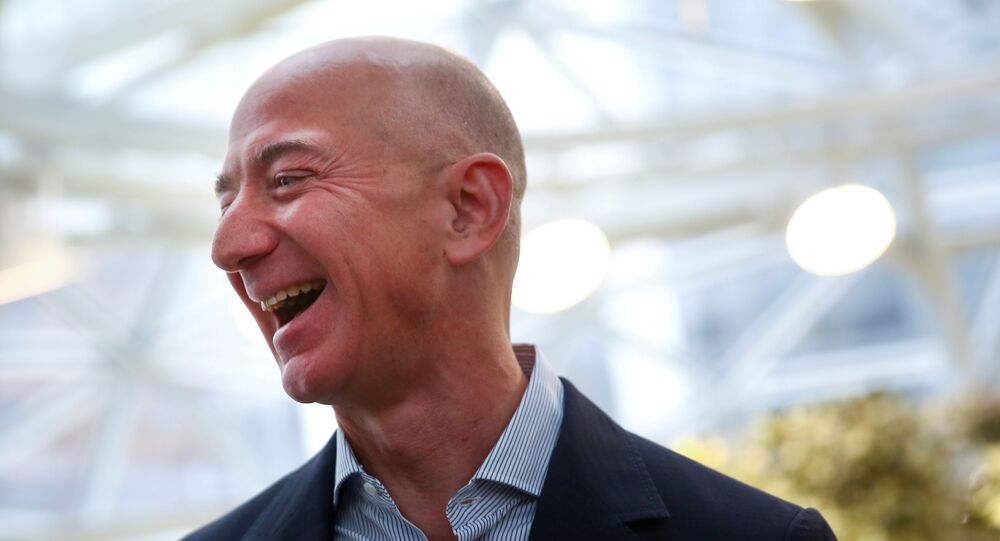 'Alexa, Uninstall Me as CEO': Twitter Shatters With Reactions Over Bezos' Resignation Announcement

Jeff Bezos, the founder of US-based e-commerce mammoth Amazon has decided to step down as the company CEO this year. In a letter to employees, the 57-year-old multi-billionaire revealed that he will be diverting his focus to new initiatives and products. Bezos founded Amazon in 1994 and has been leading the company ever since.

Amazon has announced that Bezos will be replaced by Andy Jassy, who has been running the company's cloud computing division and the transition is expected to be carried out between July and September of this year.

© AP Photo / Ted S. Warren, File
'Keep Inventing': Jeff Bezos Announces He Will Step Down as Amazon CEO
The announcement of Bezos resigning from the post of Amazon CEO has garnered reactions from around the world. From "Alexa" jokes to Bezos-themed GIFs and memes – public reaction to Amazon's explosive news is flooding Twitter.

Netizens are applauding Bezos deciding to step down when he's still "ahead in the game" – referring to Amazon's global success as well as Bezos' net worth of $185.7 billion that makes him one of the world's richest individuals.

Jeff Bezos To Step Down As Amazon CEO This Year

Me interviewing for the Amazon CEO position #Amazon #JeffBezos pic.twitter.com/LJlRzJeRTh

​Bezos will now serve as the executive chair of Amazon's board.

Congratulations to @JeffBezos and @ajassy on your new roles. A well-deserved recognition of what you have accomplished.

​Amazon started back in 1994 as an online bookstore in a one-room office that Bezos transformed into an e-commerce giant over a period of 26 years.

How it started vs. How it's going #JeffBezos #Amazon pic.twitter.com/Qctud0zjAH

​In the letter to his 1.3 million employees worldwide, Bezos reiterated the importance of "invention".

"I don't know of another company with an invention track record as good as Amazon's, and I believe we are at our most inventive right now. As much as I still tap dance into the office, I'm excited about this transition", Bezos wrote.

Apart from Amazon, Bezos is part of various businesses like the American publication The Washington Post. The mega industrialist also owns a space research company known as Blue Origin.