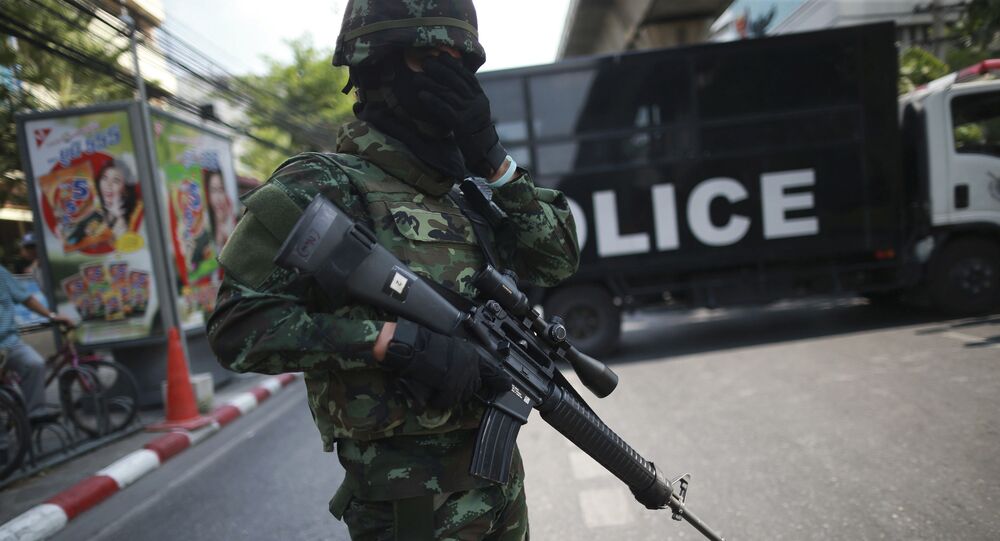 Military Coups That Shook the World Over the Past Decade

Myanmar's military seized power on 1 February, detaining Nobel laureate Aung San Suu Kyi, along with other leaders of her National League for Democracy (NLD) party, ostensibly over allegations of "election fraud", imposing a state of emergency for one year.

Myanmar’s civilian leader, Aung Suu Kyi, along with the nation's president and other top politicians, were detained on 1 February, with the country’s military declaring a one-year state of emergency after weeks of escalating tensions in the wake of the November election.

The National League for Democracy (NLD), led by Aung San Suu Kyi, a former political prisoner, had won 83 percent of the available seats, with the country’s military, known as the Tatmadaw, charging that there had been massive voting fraud. The developments came on the day when Parliament was set to convene, with new members sworn in.

In the light of the recent developments, here is an overview of some of the military takeovers that shook the global political arena during the last decade.

On 18 August 2020 the military stirred up a mutiny in Mali at a military base near the capital, Bamako.

The rebels demanded political reforms, a transition of power, and a new general election, as they kidnapped several high-ranking officials, including President Ibrahim Boubacar Keita and Prime Minister Boubou Cisse.

On 19 August Keita announced the resignation of the government and the dissolution of the parliament. The coup leaders declared the formation of a National Committee for the Salvation of the People, headed by Colonel Assimi Goita, closed the country’s borders, and imposed a curfew.
On 27 August 27 Keita was released.

After negotiations with political leaders and representatives of civil society, on 12 September the Mali military approved a "basic law and roadmap for the transition period" in the country.

​On 25 September, the former Minister of Defence of Mali, Ba Ndau, took over as the country's president for the transitional period, with Colonel Assimi Goita sworn in as vice-president.

Sudan's President Omar al-Bashir was ousted and arrested by the military on 11 April 2019, bringing the Transitional Military Council to power in the wake of months of mass anti-government rallies.

🇸🇩 Exuberant crowds took to the streets of Sudan to celebrate the first anniversary of the uprising that toppled veteran autocrat Omar al-Bashir and to demand justice for slain protestershttps://t.co/wHXu4QwLtq pic.twitter.com/dWBPhNOo73

​Omar al-Bashir had governed Sudan nearly 30 years. He was sentenced to two years in prison on multiple corruption charges and also prosecuted for the military coup in 1989 that propelled him to power. As a brigadier general in the Sudanese Army, he had led a group of officers in a military coup to depose the elected government of prime minister Sadiq al-Mahdi after it began negotiations with rebels in the south.

In May of 2019, Bashir was charged with incitement and involvement in the killing of protesters who had participated in the demonstrations in his country. The former president was also accused of financial fraud and is serving a two-year prison term in Kober prison in Khartoum.

On 15 November 2017, the Zimbabwean military forced President Robert Mugabe (1924-2019) to resign from the presidency after confining him to house-arrest in a move that was widely seen as an attempt to pre-empt the president's wife Grace from succeeding him as the country's leader. Emerson Mnangagwa, the country's Vice President, stepped in to fill the position.

On 6 September 2019, Robert Mugabe died in a hospital in Singapore.

On 16 September 2015, members of the Regiment of Presidential Security (RSP), an autonomous military unit formed under President Blaise Compaore, detained the country's government, including transitional President Michel Kafando, Prime Minister Yacouba Isaac Zida (who was also the former deputy commander of the RSP), and numerous members of the cabinet.

© REUTERS / Joe Penney
A taxi driver sits in front of the ransacked home of a member of parliament belonging to the ex-president Blaise Compaore's political party in Ouagadougou, capital of Burkina Faso, November 3, 2014

The interim government had been formed in the wake of the 2014 Burkinabe uprising, when a popular movement overthrew the long-time president Compaoré, who himself had risen to power in the wake of a 1987 coup against leader Thomas Sankara.

The politicians seized in 2015 were later released, and the leaders of the coup and loyalist troops penned an agreement to prevent violence in the capital, Ouagadougou.

Against the backdrop of massive opposition demonstrations and street clashes, in May 2014 Thailand witnessed a military coup launched under the slogan of national reconciliation after years of political conflict between supporters and opponents of the Shinawatra political clan. The military coup saw Thaksin Shinawatra and his sister, Yingluck, who both served as prime ministers, ousted.

General Prayut Chan-Ocha, commander of the ground forces, who spearheaded the coup, took over as head of the National Council for Peace and Order (NSMP), a military government with legislative powers. Since then, an interim parliament, comprised of lawmakers designated by the NCPO, has been operating in the country along with an NCPO-controlled cabinet.

© Fotobank.ru/Getty Images
Thai soldiers patrol near government buildings on May 23, 2014 in Bangkok, Thailand

Political activity of any kind was prohibited to suppress growing opposition and criticism, yet in December 2018, the NCPO lifted restrictions on public gatherings and political activities so that political parties could carry out election campaigns. Parliamentary elections were held in Thailand on 24 March 2019.

In 2012, the international Islamist organisation Muslim Brotherhood*, founded in 1929, succeeded in using the uncertain political situation in Egypt following the toppling of ex-President Hosni Mubarak in 2011, by nominating its member Mohamed Morsi for the presidential election that year.

© Sputnik / Andrey Stenin
Participants of the riots in the Egyptian capital

However, in July 2013, following a surging wave of popular discontent, caused by the leadership of the Muslim Brotherhood movement, Egyptian army chief General Abdel Fattah al-Sisi led a coalition to oust President Mohamed Morsi from power.

© AP Photo / Amr Nabil
Former Egyptian President Mohammed Morsi, wearing a red jumpsuit that designates he has been sentenced to death, raises his hands inside a defendants cage in a makeshift courtroom at the national police academy, in an eastern suburb of Cairo, Egypt, Saturday, June 18, 2016

Cairo outlawed the group in 2013 after al-Sisi ousted Morsi, who belonged to the Brotherhood, with the organisation subsequently declared a terrorist organisation.

The new authorities launched a crackdown against the movement, arresting Morsi and Muslim Brotherhood leaders, and declaring Chief Justice of the Supreme Constitutional Court Adly Mansour as the interim president of Egypt.

Morsi and more than 100 other people were sentenced to death in May 2015 after being convicted of colluding with foreign militants. A Court of Cassation overturned the sentences.

On 17 June 2019, Morsi died aged 67, as a result of a heart attack during a court hearing on an espionage case in Cairo.

On 24 March 2013, the Central African Republic (CAR) found itself in turmoil when its Christian president, Francois Bozize, was overthrown by mostly-Muslim Seleka rebels. Rebel leader Michel Jotodia proclaimed himself president, while ousted CAR leader François Bozizet was forced to flee to Cameroon.

However, African leaders refused to recognise Jotodia as president of the Central African Republic, with the rebel leader announcing his resignation on 10 January 10, 2014.

© AP Photo / Rebecca Blackwell
Girls hold hands as they walk past a French soldier holding a position, during an operation to secure part of the Miskine neighborhood, in Bangui, Central African Republic, Thursday, Dec. 26, 2013

The country has been locked in a deadly back-and-forth struggle ever since, with Christian and Muslim militias engaging in battles and taking revenge on each other’s citizens.

​The election in February 2016 of President Faustin-Archange Touadera, who promised to disarm the warring religious factions and bring peace to the country, has not ended the violence.

On 12 April 2012, a coup d'etat took place in Guinea-Bissau ahead of the second round of presidential elections, scheduled for 29 April, that pitted Carlos Gomes Junior against Kumba Iala.

​The military seized the central part of the capital of the republic and launched an attack on the residence of the former prime minister, presidential candidate from the ruling African Party for the Independence of Guinea-Bissau and Cape Verde (PAIGC) Gomes Junior.

Together with acting President Raymund Pereira, Gomes Junior was arrested. Members of the Military Council ran the country until an interim National Transitional Council was established on 15 April.

The military claimed they did not strive for power, but were driven by frustration over a secret agreement ostensibly concluded between the country's authorities and Angola to reform the military.

United Nations Security Council Resolution Number 2048 (2012) can help you better understand the political crisis in Guinea Bissau. Because these are the same general officers who facilitate the takeover of Sissoco.@eu_eeas @AUC_MoussaFaki @francediplo_EN @antonioguterres @UN pic.twitter.com/PSFMWBhBPe

​In late April, the ousted leaders of Guinea-Bissau were released and fled the country. Following the coup, representatives of the military junta and the main opposition parties in Guinea-Bissau signed an agreement establishing a two-year transition period.

In May 2014, following the results of the second round, Jose Mario Vaz, representing the African Party for the Independence of Guinea and Cape Verde (PAIGC), was elected president of the country.

*The Muslim Brotherhood is a terrorist group, banned in Russia.