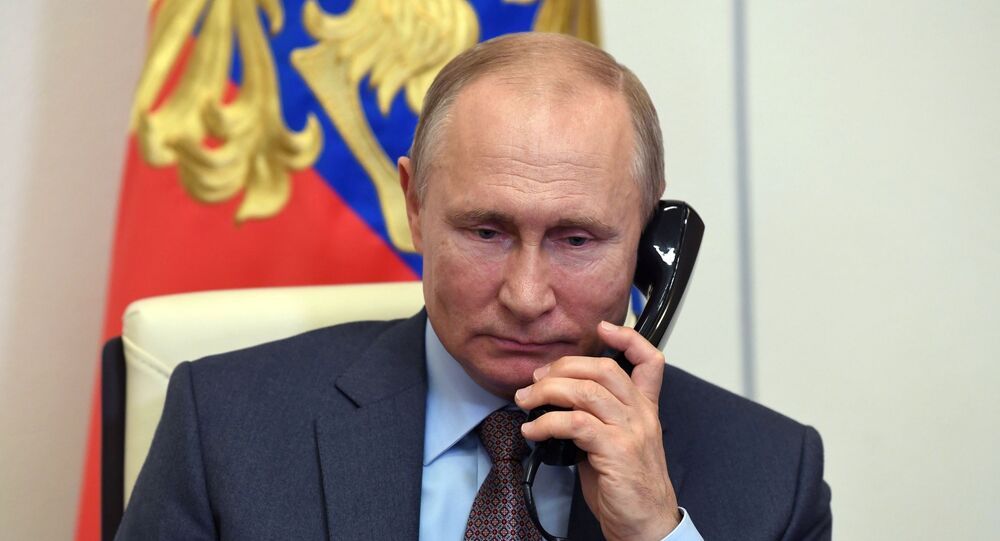 Putin in First Talk With Biden: Normalisation of US-Russian Ties in Interests of Both States

While the Biden administration has previously expressed readiness to work with Moscow to prevent the expiration of the last remaining arms control accord between the two countries, it is reportedly not planning on "resetting" the deteriorating relations with the Kremlin.

Russia’s President Vladimir Putin has said in his first telephone talk with newly sworn-in US President Joe Biden that a normalisation of ties between Washington and Moscow is in the interests of both countries. Putin added that an improvement in the dialogue between the two powers would also benefit the whole world due to their influence on global security and stability.

During the phone conversation, which took place on Biden's initiative, the two presidents discussed a number of issues, many of which have troubled bilateral relations for some time. According to the White House, Biden raised issues such as recent cyberattacks against American companies and government institutions, which the US has attributed to Russia without presenting any evidence, as well as last year's media allegations about the Kremlin paying bounties to the Taliban for killing US servicemen, Russian opposition activist Alexei Navalny, and Moscow's purported election meddling.

© CC BY 2.0 / Flickr/Mark Mauno
Titan II was the longest-serving ICBM (Intercontinental Ballistic Missile) in the US Air Force strategic arsenal

The two presidents over the phone also discussed the issue of the rapidly approaching expiry of the New START treaty – the last arms accord between the two states limiting their nuclear arsenals. Both Biden and Putin expressed satisfaction with the preliminary agreement on the treaty's extension. The formal procedures for the New START extension will be concluded in the coming days, the Kremlin said soon after the end of the presidents' conversation.

US-Russian relations have been spiralling down ever since 2014, when the US and other Western states intervened in domestic unrest in Ukraine, provoking a coup, while blaming Russia for the subsequent insurgency in the country's east. The ties deteriorated even further after Washington issued a series of unfounded accusations against Moscow, starting with alleged meddling in the 2016 presidential election and purported cyber intrusions. These accusations were usually followed by economic sanctions against Russia, which have been harshly condemned by the Kremlin. Russian President Vladimir Putin has repeatedly expressed readiness to normalise bilateral ties should the White House wish to do so too, but so far the new administration has not signalled such an intent.