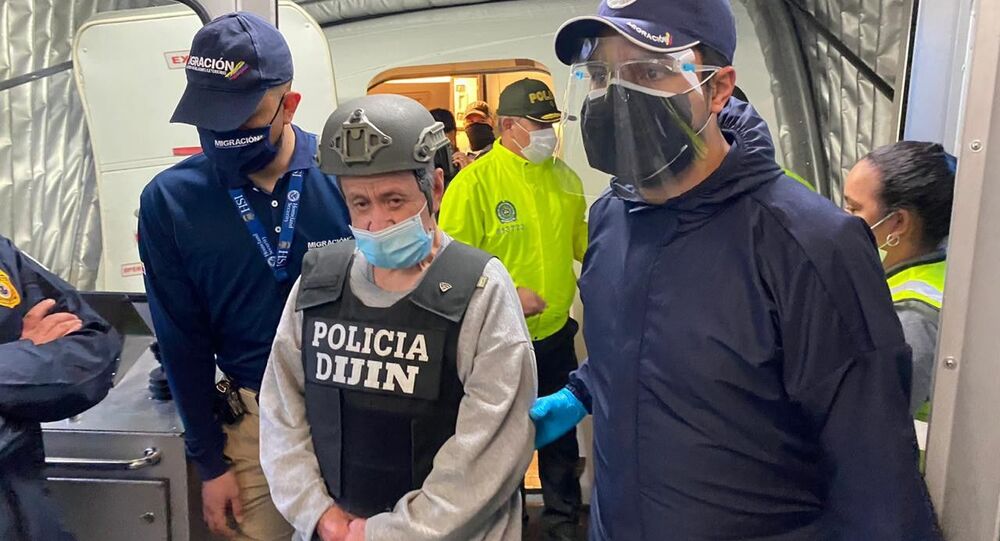 MEXICO CITY (Sputnik) - Former Colombian paramilitary member Hernan Giraldo Serna has been extradited from the United States after serving 12 years in jail for drug trafficking to face over 40 arrest warrants at home for terrorism, torture, the sexual abuse of minors, abduction, and murder, Colombia's migration authorities said on Tuesday.

"Giraldo Serna has arrived on an extradition flight from the United States. More than 40 arrest warrants have been issued for him in Colombia over forced disappearances, murder, torture, terrorism, and abductions, among other crimes", the migration service said on its website.

In 2019, Serna was convicted in absentia on around 700 counts of such crimes as rape, forced abortion, forced prostitution, and sexual slavery. The 72-year-old is considered one of the worst sexual predators of our time, whose victims count in the hundreds of teenage girls.

Serna made his fortune from drug trafficking in the 1970s and 1980s. He built a reputation among criminal circles and became a key leader in the United Self-Defence Forces of Colombia.

© AP Photo / Matias Delacroix
Maduro Claims Colombia's Mercenaries Planning 'New Attack' on Venezuela Soon
The paramilitary movement eventually ended up being designated as terrorist outfit and banned in Colombia, while Serna and other key leaders were extradited to the United States on charges of drug trafficking, murder, and money laundering in 2008.

The ex-paramilitary boss would normally spend 60 years in prison on the charges brought against him by the Colombian government, but local media outlets report that his lawyers might petition for immediate release, citing the time he already spent jailed in the US, as well the government's deal with ex-paramilitary members, under which their prison sentences cannot exceed eight years.