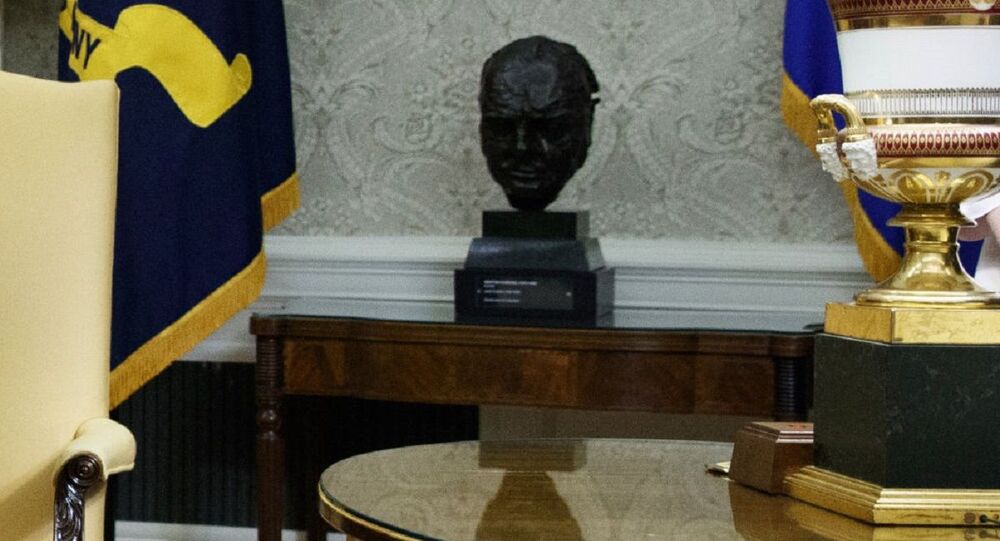 Newly-elected President Joe Biden earlier had a bust of Winston Churchill removed from the Oval Office, replacing it with a bust of Cesar Chavez, in a swift makeover on 20 January witnessed by reporters invited inside to observe the Democrat sign off on a spate of executive orders hours after the inauguration ceremony.

The Joe Biden administration has defended its decision to remove a bust of former UK Prime Minister Winston Churchill from the Oval Office as part of a recent makeover.

We’ve seen some discussion about the Churchill Bust, so we just wanted to remind everyone what the Special Relationship is truly about 🇺🇸🇬🇧 pic.twitter.com/XOdff8hbcd

​An upbeat video posted on Twitter by the US Embassy to the UK ostensibly seeks to remind people "what the Special Relationship is truly about".

The ‘Special Relationship’ is an unofficial term frequently used to describe the political, diplomatic, cultural, economic, military, and historical relations between the United Kingdom and the United States, and is often extended to its political leaders, as well.

The video underscores that the ‘Special Relationship’ is about ‘people, values & trust’, as it juxtaposes pictures of ‘just a bust of Winston Churchill’ with footage of former US and UK presidents meeting.

The controversy around the Jacob Epstein sculpture of the British wartime leader, which British Prime Minister Tony Blair had loaned to President George W. Bush in 2001, dates back to 2009.

That is when ex-President Barack Obama caused a stir by removing it in favour of a bust of Martin Luther King Jr. when he entered office in what was perceived by critics as a snub to the US-UK alliance.

Obama’s administration had attempted to soothe ruffled feathers by pointing out that there was still a Churchill bust elsewhere in the White House at the time.

“Some said it was a snub to Britain. Some said it was a symbol of the part-Kenyan president's ancestral dislike of the British Empire - of which Churchill had been such a fervent defender," Johnson was quoted as saying in 2016 by The Sun.

Ex-President Donald Trump reinstated the bust of Churchill to the Oval Office on 21 January 2017, after Obama's departure, telling the press:

"This is the original folks, in many, many ways… It’s a great honor to have Winston Churchill back."

However, after newly-elected Democratic President Joe Biden was sworn in on Inauguration Day on 20 January, the bust of the former UK Prime Minister Winston Churchill was yet again whisked away from the Oval Office.

The Washington Post, which was given an advance tour of Biden's office, had reported that "Biden does not have the [Churchill] bust on display" in the famous room.

The office, which also had the drapes and rug changed, now boasts a large portrait of Franklin D. Roosevelt, along with paintings of Thomas Jefferson, Alexander Hamilton, Benjamin Franklin and George Washington. The busts on display are of such figures as Martin Luther King Jr, Robert Kennedy, Rosa Parks, Eleanor Roosevelt and Cesar Chavez.

Joe Biden’ decision to ditch the bust had drawn criticism on both sides of the Atlantic, as Reform Party UK leader Nigel Farage denounced it as a "slap in the face to the British and any prospects of good relations."

There are media reports that the bust of Winston Churchill has been removed from the Oval Office.

If true, this is a slap in the face to the British and any prospects of good relations. pic.twitter.com/DBHhygcuLf

​The US Embassy’s video didn’t go down well with foreign policy analyst and former aide to ex-Prime Minister Margaret Thatcher, Nile Gardiner. He went on Twitter to remind the Biden administration that Churchill was ‘a huge hero on both sides of the Atlantic’, and urged the US side to ‘show some respect.’

The Biden White House is doubling down on removing the Churchill bust from the Oval Office, saying it is "just a bust of Winston Churchill."

Sir Winston Churchill saved the free world. He is a huge hero on both sides of the Atlantic. Show some respect. https://t.co/rFJJUZbPIj

​Netizens similarly weighed in on the move by the Biden team. Many perceived it as a 'sign of things to come' in the relationship between the two countries.

It's a very revealing statement about how Britain can expect to be treated by the new US administration. The last POTUS to remove Churchill told us to join the back of the queue for a trade deal....how special was that?

Churchill was the greatest British politician of the 20th century if not of all time, and frankly, none of your current politicians including your new President are fit to kiss his boots

The first act of your president was to remove the bust of Churchill. What an insult that is to the British people.

I do agree, but these things have symbolic value.

I would imagine there would be a similar reaction in America where you to learn that the Queen removed portraits of past presidents.

​There has not been any official comment on the developments from the White House.

However, the UK side appeared eager to downplay the controversy. Asked about the bust, a spokesman for 10 Downing Street was quoted by The Daily Mail as saying:

"The Oval Office is the President's private office and it is up to the President to decorate it as he wishes. We are in no doubt about the importance President Biden puts on the US-UK relationship."