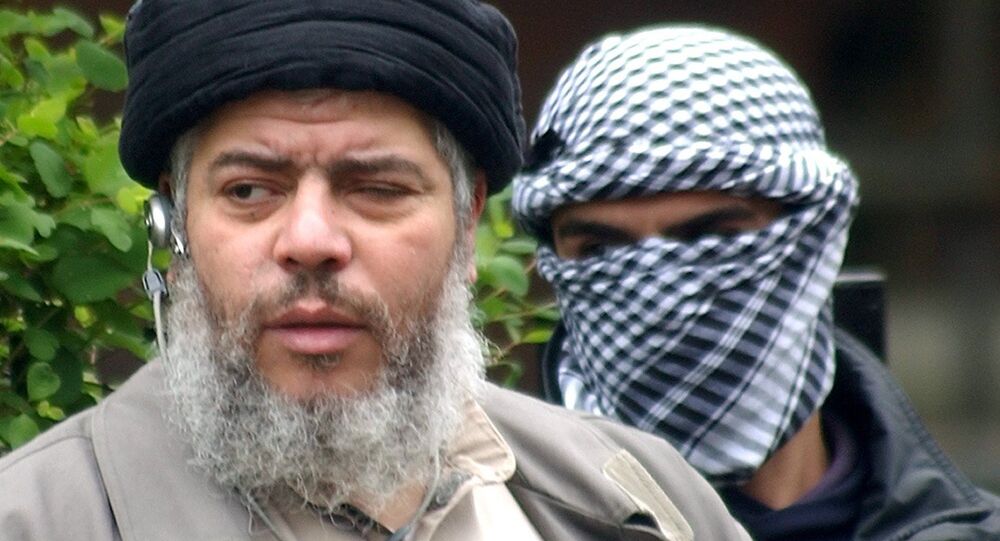 Radical Islamic preacher Abu Hamza al-Masri, also known as the Hook Hand, has been serving a life sentence for multiple terrorism-related offences at the US state of Colorado’s ADX Florence prison, “the Alcatraz of the Rockies”, and earlier begged for release over fears he could die from COVID-19.

A former UK anti-terror chief has warned that Radical Islamic preacher Abu Hamza al-Masri, a British national of Egyptian origin, must never be allowed back into the country, reports The Sun.

Sir Ivor Roberts, the Foreign Office's former head of counter-terrorism, has written for the outlet to insist that a return for Hamza, 62, would be the "last thing" UK law enforcement needs.

“Were he to return here, the simple truth is that even with our talented security services and counter-terrorism police monitoring him, we are not as safe as if he were behind bars,” writes the ex-security chief, applauding the fact that US prosecutors are opposing his release.

“I have no doubt he hankers after a return to the days when he was allowed to preach freely in London, turning vulnerable youngsters into acolytes hellbent on murder and destruction,” underscores the former diplomat.

Since 2012, the notorious terrorist and radical Islamic preacher Abu Hamza al-Masri, also dubbed the Hook Hand, has been serving a life sentence in the US state of Colorado’s ADX Florence prison. The 'supermax' US penitentiary is touted as the most secure prison in the world.

According to The Sun, Abu Hamza, convicted and sentenced in 2015 to life in prison without the possibility of parole, earlier begged British authorities to move him back to a prison in the UK, citing fears he could die from COVID-19.

In a letter from his cell, he ostensibly added he could suffer “brain damage, failure of organs and amputation to more limbs”.

It houses the most dangerous criminals in the US. There are 1,400 remote-controlled doors that can all close at an instant if the panic alarm is sounded. The security aims to keep convicts within the prison and also outsiders out pic.twitter.com/IDtYiKjhVS

​However, the prison authorities were cited as insisting that everything was being done to prevent any outbreaks of the virus, adding that the notorious inmate’s health conditions were being ‘properly managed’.

“It is a measure of the danger he poses that the US sent him to the jail reserved for its most dangerous prisoners, many moved there after murdering their guards,” cautions Roberts.

US President Joe Biden's new administration should "tell him to abandon all hope" of ever escaping to a more lenient regime, urges one of the most experienced and respected former British diplomats.

Earlier, in October 2020, the hate preacher also issued other complaints that were turned down.

In summer last year Abu Hamza al-Masri sued US authorities over “inhuman and degrading” conditions and for breaching his human rights at the Colorado prison, The Times reported.

He had complained of “cruel and unusual conditions in prolonged, continuous, dangerous solitary confinement since 2012”, the year in which he was extradited from Britain to the US to stand trial for supporting the terrorist organisation al-Qaeda*.

In 2004, UK authorities detained Abu Hamza in response to a request by Washington to extradite the radical imam to face terrorism-related charges.

In 2006, he was charged in Britain with 16 offences for “inciting violence and racial hatred” and was sentenced to seven years imprisonment, after which he was extradited to the US and was convicted and sentenced to lifetime prison on 11 counts of terrorism.

The charges included hostage-taking in Yemen in 1998, efforts to create a terrorist training camp in Oregon in 1999 and facilitating violent jihad in Afghanistan in 2000 and 2001, along with supporting al-Qaeda*.

This comes a few weeks after the outlet reported, without citing any sources, that Osama bin Laden’s henchman Adel Abdel-Bary had returned to the UK after being granted early "mercy release" from a US prison on similar grounds, with judges convinced the obese criminal was a major coronavirus risk.

​Adel Abdel Bary was a senior member of the London cell of the Egyptian Islamic Jihad, which later merged with al-Qaeda, and was sentenced to 25 years for his involvement in the 1998 terror attacks on the US embassies in Kenya and Tanzania.

The fact that Abdel-Bary was reportedly back on the streets ‘sends an undesirable message to those who might be tempted to follow’, concluded Sir Ivor Roberts in The Sun.

*Al-Qaeda is a terrorist organisation banned in Russia and many other coutries around the world.

As 13 Jamaicans Are Kicked Out By UK, What Are The Most Controversial Deportations In History?