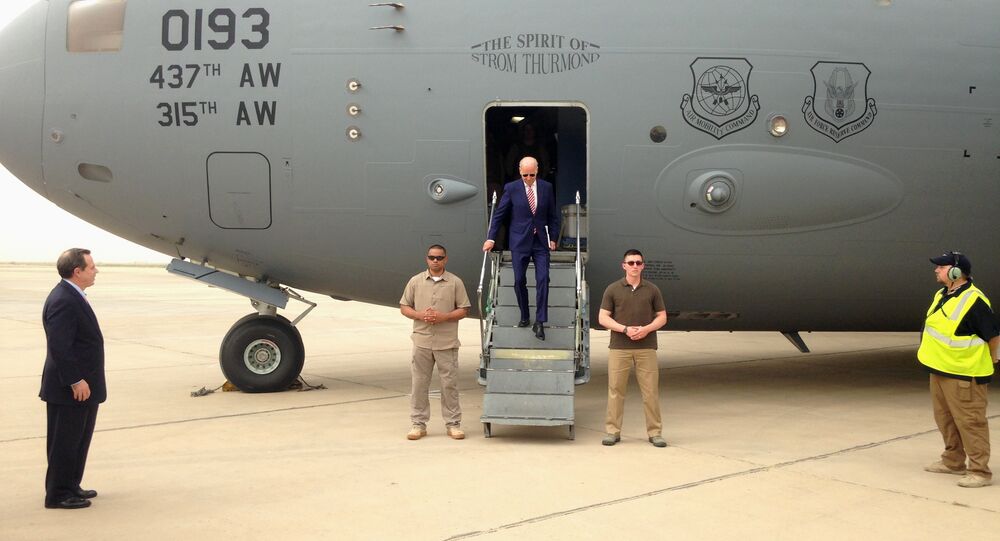 Baghdad was rocked by twin terrorist attacks on Thursday, with at least 32 people killed and 110 injured. Daesh (ISIS)* claimed responsibility. In its final days in office, the Trump administration made good on a longstanding commitment to draw US troop numbers in Iraq down from about 5,800 to 2,500 troops total.

Donald Trump, Jr. has taken aim at President Joe Biden over a news report suggesting that the new administration may treat Thursday’s Baghdad bombing as a pretext to scale up America’s military footprint in Iraq.

“Getting back into wars on the first full day. The Swamp/War Inc. is thrilled right now,” Trump wrote, referring to the ‘the Swamp’ of Washington, DC corruption, and the US military-industrial complex.

Getting back into wars on the first full day.

The recently departed former president’s son accompanied the tweet with a link to an article by the Jerusalem Post, which suggests that Thursday’s terror attacks in the Iraqi capital could “present the Biden administration with one of its first foreign crises”, and provide the president “with an early opportunity to show US support for Iraq”.

The article goes on to mention that Trump’s newly-appointed Middle East policy coordinator, Brett McGurk, already has experience in Iraq as former envoy for the US-led coalition against Daesh, and is likely to “take a keen interest in addressing the issues in the wake of the bombing”.

© REUTERS / THAIER AL-SUDANI
The site of a twin suicide bombing attack in a central market is seen in Baghdad, Iraq January 21, 2021

In his farewell address on Wednesday, Donald Trump, who made good on a pledge to reduce US troop numbers in overseas conflicts, said he was “especially proud to be the first president in decades who started no new wars”.

Although the Trump administration did ratchet up tensions with Iran to the brink of war on several occasions, increased NATO military spending and escalated the long-established US policy of ‘freedom of navigation’ patrols in the South China Sea, it did manage to keep Washington out of any major new foreign entanglements, with Trump becoming the first president not to invade a country or intervene in a foreign conflict since Jimmy Carter, who served as president between 1977 and early 1981.

© REUTERS / CARLOS BARRIA
Trump's Farewell Address: 'Especially Proud' to Be 1st President 'in Decades' With 'No New Wars'
Some of Biden’s appointees, including Secretary of State pick Antony Blinken, have expressed the need to keep US troops in foreign conflicts, have been major proponents of US wars in Iraq, Libya and Syria, and have talked about stepping up US efforts to “confront” Russia and China.

In his final two months in office, Trump fired Pentagon chief Mark Esper and replaced him with Christopher C. Miller to make good on reducing troop numbers in Afghanistan and Iraq to 2,500 personnel apiece, and to withdraw almost all American troops from Somalia. Washington began a creeping Iraq withdrawal in early 2020 after the assassination of Qasem Soleimani, a senior Iranian military commander who had assisted pro-Baghdad Shia militias in crushing Daesh in Iraq. The killing prompted Iraq’s parliament to demand the complete withdrawal of US forces from their country, and saw the US pulling out troops and handing military bases over to their Iraqi counterparts throughout much of the spring, summer and autumn of 2020 while being harried by rocket attacks.