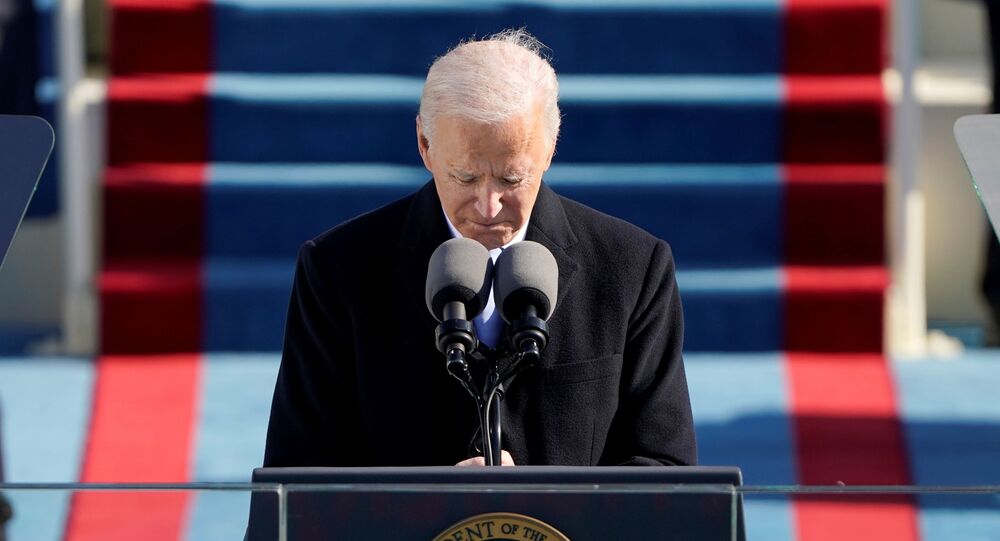 On Wednesday, January 20, Biden was sworn in on the steps of the Capitol building with his placed on a 127-year-old, five-inch-thick family Bible, after Kamala Harris took her oath as the first-ever female vice president.

World leaders have congratulated Democrat Joe Biden, 78, on becoming the next president of the United States, sharing their aspirations for the new White House administration.

In his first tweet as US President, Biden promised "to get right to work" on day one. He is expected to sign 17 executive orders that will undo some of the Trump administration's policies, such as halting construction of the border wall, rejoining the Paris Climate Agreement and World Health Organization, halting the Keystone XL pipeline project, and terminating the so-called Muslim travel ban.

UK Prime Minister Boris Johnson congratulated the new president via Twitter, highlighting the American role in addressing global issues, like climate change and the COVID-19 pandemic - which Biden put at the top of his agenda in the first days of his tenure at the White House.

Congratulations to @JoeBiden on being sworn in as President of the United States and to @KamalaHarris on her historic inauguration. America’s leadership is vital on the issues that matter to us all, from climate change to COVID, and I look forward to working with President Biden.

French President Emmanuel Macron took to Twitter to congratulate Biden and Harris, hailing the intention to return to the Paris Accord that former President Donald Trump left in 2017. The agreement, signed in 2016, envisages keeping the rise in global temperature to less than 2 degrees Celsius (3.6 degrees Fahrenheit) above pre-industrial levels in a bid to reduce the impact and risks of climate change.

To @JoeBiden and @KamalaHarris.
Best wishes on this most significant day for the American people!
We are together.
We will be stronger to face the challenges of our time. Stronger to build our future. Stronger to protect our planet. Welcome back to the Paris Agreement!

European Commission President Ursula von der Leyen also praised the new administration for the decision to rejoin the Paris climate deal on the first day of his presidency. Speaking at the European Parliament Plenary on Wednesday, von der Leyen said that after four years, the EU finally has a “friend in the White House”, adding that “this new dawn in America is the moment we've been waiting for so long”.

I am delighted that on day one of this new administration, the US will rejoin the #ParisAgreement.

This is the starting point for our renewed cooperation.

And way more is to come.

UN Secretary-General Antonio Guterres sent a letter to Joe Biden, expressing his hope for cooperation on a series of global challenges, UN spokesperson Stephane Dujarric said in a press briefing. “A letter is going out to President Biden expressing that he [Guterres] looks forward [to working] with President Biden and with Vice President [Kamala] Harris,” Dujarric said.

“The United States has a key leadership role to play across the international agenda, including in the Security Council, on matters of peace and security. We also look forward to working with the administration to advance sustainable development, human rights for all the world's people.”

Dujarric also welcomed the reports of the Executive Orders expected to be signed later on Wednesday, including on the United States re-joining the Paris climate accord and the World Health Organization.

In a video message posted on Twitter, Netanyahu called on Washington to cooperate with Israel in confronting “the threat posed by Iran”. The Israeli premier has voiced his opposition to the 2015 Iran nuclear deal - which Trump had abandoned and Biden has vowed to rejoin, with his nominee for secretary of state, Antony Blinken, saying that Washington would later seek a broader agreement covering the missile program. Iranian President Hassan Rouhani said on Wednesday that Tehran is ready to “act in compliance with all of its obligations” if the US resumes implementation of the JCPOA.

The Donald Trump administration abandoned the multilateral accord in 2018, reinstating sanctions on Tehran as part of a maximum pressure campaign.

“I look forward to working with you to further strengthen the US-Israel alliance, to continue expanding peace between Israel and the Arab world and to confront common challenges, chief among them the threat posed by Iran”, Netanyahu tweeted.

“I wish you the greatest success. God bless the United States of America. God bless Israel”, he added.

At the same time, the official account of the Israeli PM shared a warm goodbye message for the previous US administration, thanking President Trump for “all the great things” he's done for Israel.

President Trump, thank you for all the great things you have done for Israel, especially your historic recognition of Jerusalem as Israel's capital and bringing four peace agreements between Israel and the Arab world.

Palestinian President Mahmoud Abbas also congratulated the new administration, saying that he looks forward to “working together for peace and stability in the region and the world.”

Abbas said he was ready for “comprehensive and just peace process that fulfills the aspirations of the Palestinian people for freedom and independence.”

Canadian Prime Minister Justin Trudeau said in a statement on Wednesday that he looks forward to working with the newly minted Biden administration on a host of issues including the COVID-19 pandemic response and recovery.

“Canada and the United States have worked side-by-side to tackle some of the greatest challenges we have faced in our history,” Trudeau said in a statement. “We will continue this partnership as we fight the global COVID-19 pandemic and support a sustainable economic recovery that will build back better for everyone.”

Italian Prime Minister Giuseppe Conte also expressed readiness to work together with the United States to meet major international challenges, and Swiss President Guy Parmelin expressed confidence that the excellent relations his country enjoys with the US would be strengthened with Biden in office.

Greek Prime Minister Kyriakos Mitsotakis also congratulated the two Democrats in a tweet and said he was looking forward to further strengthening the ties and friendship between Greece and the US.

The Netherlands and the United States have long been close allies. I look forward to furthering these ties with @POTUS @JoeBiden and @VP @KamalaHarris. On behalf of the Dutch government, I would like to congratulate them on their historic inauguration.

“On the occasion of your inauguration as the forty-sixth President of the United States of America, I extend cordial good wishes and the assurance of my prayers that Almighty God will grant you wisdom and strength in the exercise of your high office,” Pope Francis' message said.

Russian Ambassador to the United States Anatoly Antonov told Sputnik that Russia has not yet had any contact with the new US administration but expects to start a "substantial" dialogue as new people start their jobs. The ambassador added that Russian diplomats were familiar with many of Biden’s nominees for the top posts, as they had worked in the US administration in the past.

Following the inauguration ceremony, Biden signed his first three documents in the Presidents Room at the Capitol - an Inauguration Day Proclamation and nominations to Cabinet positions and sub-Cabinet positions. His family including his grandchildren, Vice President Kamala Harris and three former presidents who had attended his inauguration - Democrats Bill Clinton and Barack Obama and Republican George W. Bush, also attended the ceremony.

“It’s time for boldness, for there is so much to do, and this is certain: I promise you, we will be judged, you and I, how we resolve these cascading crises of our era,” Biden said on the steps of the US Capitol.

“We must end this uncivil war that pits red against blue, rural versus urban, conservative versus liberal. We can do this if we open our souls instead of hardening our hearts,” he added.

As Biden's inauguration was underway, the now ex-President Trump left DC for the last time, heading to his Mar-a-Lago estate in Palm Beach, Florida, together with the former first lady, Melania. According to tradition, Trump left a handwritten letter in the Oval Office for his successor.