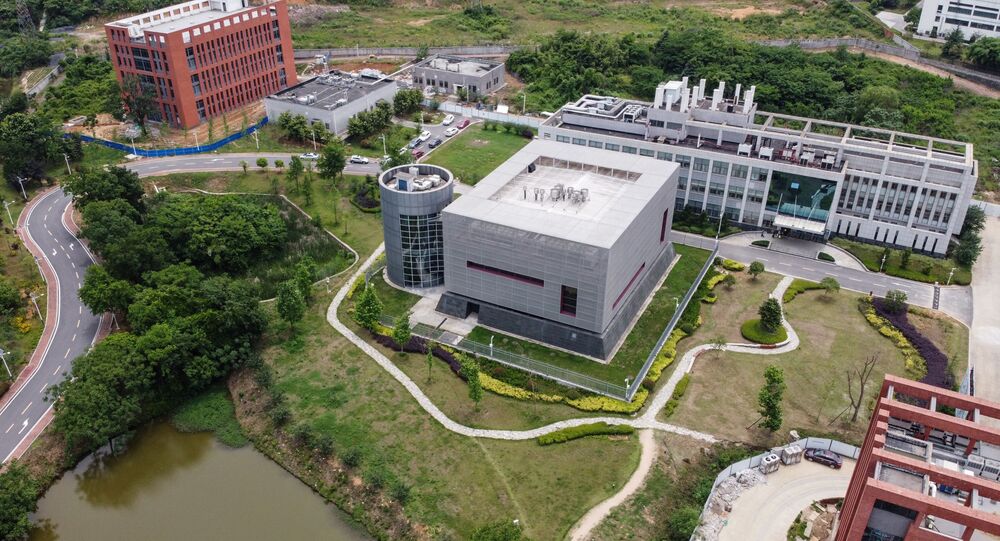 The first COVID-19 cases were identified in the Chinese city of Wuhan in December 2019 and were officially found to have originated from a wet market there. Most scientists believed it was transmitted naturally from animals to humans, yet some fed into the theory, fueled by the US, that it may have leaked accidentally from the Wuhan lab.

US intelligence officials claim that lab researchers in the Chinese city of Wuhan experienced coronavirus symptoms in autumn 2019, before the first widely reported cases of the respiratory disease in December.

A Department of State statement says staff in the Wuhan lab who had allegedly been experimenting with bat coronavirus RaTG13, which is reportedly 96.2 percent genetically similar to SARS-CoV-2 which causes COVID-19, "under conditions that increased the risk for accidental and potentially unwitting exposure".

Several of the researchers subsequently fell ill with symptoms "consistent with both COVID-19 and common seasonal illnesses", says the statement.

We have not determined whether the outbreak began through contact with infected animals or was the result of an accident at a laboratory in Wuhan, China. https://t.co/OWzFM7hB4D

​"We have not determined whether the outbreak began through contact with infected animals or was the result of an accident at a laboratory in Wuhan, China," the statement said.

The Department added that the virus could have emerged naturally as a result of human contact with infected animals, yet did not rule out that a lab experiment gone awry at the Wuhan Institute of Virology (WIV) could be faulted.

"Alternatively, a laboratory accident could resemble a natural outbreak if the initial exposure included only a few individuals and was compounded by asymptomatic infection."

The laboratory in Wuhan has dismissed all accusations of covering up a leak, while China earlier claimed the pandemic could have originated in another country altogether.

China’s Foreign Minister Wang Yi said during an interview with state-run Xinhua news agency on 1 January responded to the narrative accusing China of lack of transparency on the issue of the pandemic and its origin.

“We raced against time and were the first country to report cases to the world. More and more research suggests that the pandemic was likely to have been caused by separate outbreaks in multiple places in the world,” said Yi.

The developments come as a team from the World Health Organisation (WHO) has arrived in Wuhan to investigate the source of the pandemic.

Members of the World Health Organization team tasked with investigating the origins of the coronavirus sit on a bus while leaving Wuhan Tianhe International Airport in Wuhan in China. More photos of the day: https://t.co/oJknwplOMC
📷 Thomas Peter pic.twitter.com/YLIs2kQzSK

​WHO spokesperson Tarik Jasarevic told Sky News the team would "look into different aspects of the early days of the pandemic".

In response to speculations that the virus might have been engineered in a laboratory, he said:

"We will follow wherever science leads us. The majority of scientists believe there is a natural origin of the virus, we know that bats are a natural reservoir of other coronaviruses, we really want to go and see and get the data."

Against the backdrop of the WHO, the outgoing US Secretary of State Mike Pompeo reiterated accusations aimed at China, urging the WHO to pressure it to pursue greater transparency.

While the Chinese Communist Party lied about and hid the COVID-19 outbreak in Wuhan, the Trump Administration led the world in publicly calling for transparency and denounced the cover-up. #ChinaLiedPeopleDied pic.twitter.com/7YkSmKb6dY

The credibility of WIV senior researcher Shi Zhengli’s public claim that there was ‘zero infection’ registered among the WIV’s staff and students of SARS-CoV-2 or SARS-related viruses is questionable, Pompeo said on late Friday.

Pompeo accused the lab of having collaborated on secret projects with the Chinese Defence Ministry while presenting itself as a civilian institution.

© AFP 2021 / NICOLAS ASFOURI
Health workers in suits walk in the international arrivals area, where arriving travelers are to be taken into quarantine, at the international airport in Wuhan on January 14, 2021, ahead of the expected arrival of a World Health Organization (WHO) team investigating the origins of the Covid-19 pandemic.

The US President Trump’s administration has long been alleging, without offering any proof to corroborate the claims, that the coronavirus emanated from WIV before it spread to become a global pandemic that has racked up a deadly death toll and wreaked havoc with global economies.