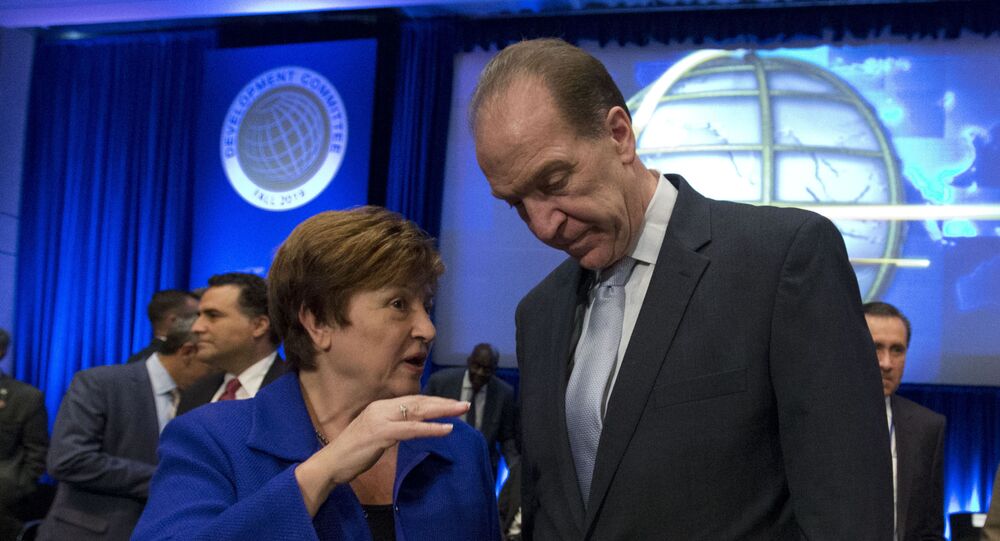 Over 25,000 people, including global leaders, journalists, and executives have gathered at the three-day REUTERS NEXT summit to talk about challenges in world politics, tech, business, and economics, as well as media freedom.

All client countries and loan recipients receiving funds from the World Bank's 35 percent green project financing target will participate in “climate-related” borrowing activities, David Malpass, the president of the financial institution, told Sputnik at the Reuters NEXT summit.

“You're identifying a key point about the inequality and unfairness about the way in which the world is set up in the system. Advanced economies are producing a big chunk of the greenhouse gas emissions, that includes coal-fired electricity [and] vehicles. When vehicles get old in the advanced world, they ship them to the poorer countries, and advanced countries benefit because they get the proceeds from those shipments, but it leaves a large impact on climate change,” he told Sputnik.

​Speaking on the 35 percent green financing targets, Malpass said the World Bank’s portfolio and activity commitments held a large “chunk” in climate adaptation, which was “synergistic” with development.

​The agricultural sector required a greener approach, including fertiliser conservation, and the World Bank explored ways to “improve and have a better overlap” between national development and climate goals also linked to the Paris Accords.

Malpass cited specific programmes in countries launching their own green initiatives, including China, Ethiopia and the ‘Great Green Wall’ region stretching across the Sahel.

“For example, in China, which has had extreme environmental challenges, we've reoriented our programmes so that it heavily engages in public good, including marine plastics,” he told Sputnik, adding it was a gradually diminishing programme.

Ethiopia had been one of the largest programmes with major efforts in reforestation, Malpass added.

“That region has been devastated by deforestation and can be helped by a number of activities that the World Bank is an essential part of, working with other partners around the world,” he said.

He also spoke on a trip to Senegal he had taken in 1988 with former Treasury Secretary James Baker, where he witnessed major desertification.

“These are very frustrating challenges, and the world's been looking at ways to grapple with these changes of climate,” he said while stressing the World Bank had been strongly encouraging environmental initiatives to resolve the crisis, he said.

Private Sector Must Step Up To Help COVID-19 Efforts

Speaking on interest rates, he said they could help poorer countries restructure debt via a new G20 framework, adding developing countries were forced to pay rates of 6 to 7 percent on debt.

The G20’s Debt Service Suspension Initiative (DSSI) needed support from the private sector to allow some of the world’s poorest nations to defer bilateral debt to the end of June, he said.

“It’s been frustrating that the private sector has looked at the COVID crisis and said, ‘Let’s try to get as many payments from the poorer countries as we can during this crisis,’. From the standpoint of the private sector, they say, ‘A contract’s a contract,’ but I ... would push back and say, throughout history there have been occasions where there needs to be deep debt reduction, and this clearly is one of those occasions,” Malpass added.

He said that the G20 could only work with private sector participation, adding the World Bank backed using its funding to help nations hire lawyers to buy back debt at a major discount.

The Reuters NEXT summit took place from 11 to 14 January and joined 25,000 professionals, global leaders, journalists and executives to discuss challenges in world politics, tech, business, economics and media freedom, and is one of the largest such events in the world.