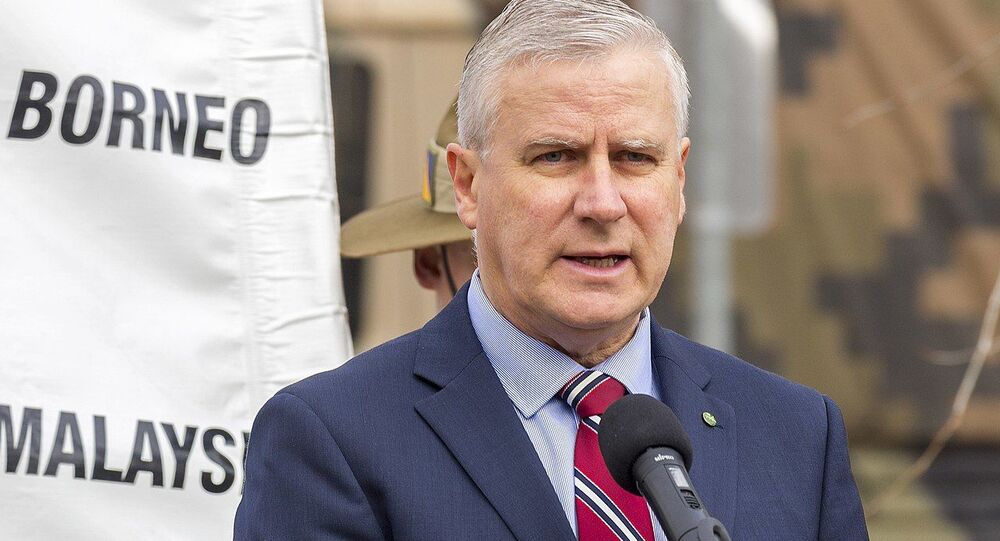 In the wake of legions of Trump supporters storming the Capitol building on 6 January, as lawmakers were to certify the 3 November election results, Michael McCormack lamented the deaths during the attack saying that "all lives matter", in reference to the slogan of BLM protesters in 2020.

Australia's acting prime minister, Michael McCormack, has drawn ire from the public for asserting that "all lives matter" as he moved to defend previous comments comparing the deadly Capitol chaos on 6 January to last year's Black Lives Matter protests.

"I appreciate there are a lot of people out there who are being a bit bleeding heart about this, and who are confecting outrage, but they should know that those lives matter too. All lives matter", McCormack told reporters on Tuesday, ignoring calls from Amnesty International to retract the comparison.

Chris Bowen, Shadow Minister for Health, hit back, saying Australians of colour "deserve to know that the government thinks more of them than that, and to have the acting prime minister spout the words 'all lives matter', to diminish the Black Lives Matter movement, was beyond disgusting".

Despite a barrage of criticism directed at him, McCormack stood by his previous rhetoric, saying both events - an overwhelming protest against racial inequality and the death of African American George Floyd and the revolt by Trump supporters that claimed the lives of five - equally saw violence unfurl.

"Any form of violence, any form of protest that ends in death and destruction is abhorred", he said.

"The United States goes through great change but any form of protest, whether it is a protest over racial riots or what we have seen on Capitol Hill in recent days is condemned and abhorred".

© AP Photo / Ted S. Warren
A Washington State Patrol vehicle patrols Thursday, Jan. 7, 2021, at the Capitol in Olympia, Wash., the day after supporters of President Donald Trump protested in Olympia against the counting of electoral votes in Washington, DC to affirm President-elect Joe Biden's victory. The Washington Legislature's 2021 session is scheduled to open on Monday, Jan. 11, 2021

The comments also prompted a stormy reaction from Nick McKim, the acting leader of the Australian Greens, who told The Guardian Australia:

"The Black Lives Matter movement is a push back against racist policing and politics. In contrast, the Capitol riots were because the far right didn't want to accept the results of a fair and democratic election".

He assumed McCormack's comments were due to efforts to secure votes in the next election from a "rabble of far-right nationalists, racists, and conspiracy theorists", calling on the acting PM to apologise. McKim went on to stress that adopting Trump-style politics was a "poison to democracy" that "bodes terribly for the future of Australian politics" should the Liberal party follow that course, he said.

The Greens lawmaker then came up with an admonition, saying the "cost of the Liberals and Nationals making up their own facts will be the degradation of Australian democracy".

Paul Silva, the nephew of Aboriginal man David Dungay Jr who died in police custody in 2015, reacted similarly, stressing it was a "disgrace" for McCormack to compare a protest for racial justice to the attack on the Capitol building by "fascists".

Australian Black Lives Matter marches in 2020 called for justice for Dungay who said "I can't breathe" 12 times before he died while being restrained by five prison guards, five years before George Floyd's notorious demise.

McCormack's remarks didn't sit well with many online either:

© AP Photo / Rick Rycroft
Protestors march in Sydney, Saturday, June 6, 2020, to support the cause of U.S. protests over the death of George Floyd. Black Lives Matter protests across Australia proceeded mostly peacefully as thousands of demonstrators in state capitals honored the memory of Floyd and protested the deaths of indigenous Australians in custody.

"Free speech allows me to say that Michael McCormack is a complete f***ing idiot. Fact", one enraged netizen posted.

Another recalled what McCormack said as editor of The Daily Advertiser in the 1990s:

"A week never goes by anymore that homosexuals and their sordid behaviour don't become further entrenched in society", he quoted him as saying back then.

Australia's Race Discrimination Commissioner, Prof. Tim Soutphommasane, for his part, weighed in stressing "Australia should be doing all it can to reject Trumpism and post-truth politics".

"Instead we have political leaders who flirt with the danger and risk emboldening extremists", he charged.

A currently vacationing Scott Morrison, Australia's PM and leader of the Liberals, also had his say last week about the recent developments, condemning the "terribly distressing" mayhem on Capitol Hill and calling for a peaceful transfer of power to President-elect Joe Biden. However, he stopped short of criticising Donald Trump for sending what has been perceived as ambiguous messages when the president asked his supporters to disperse.