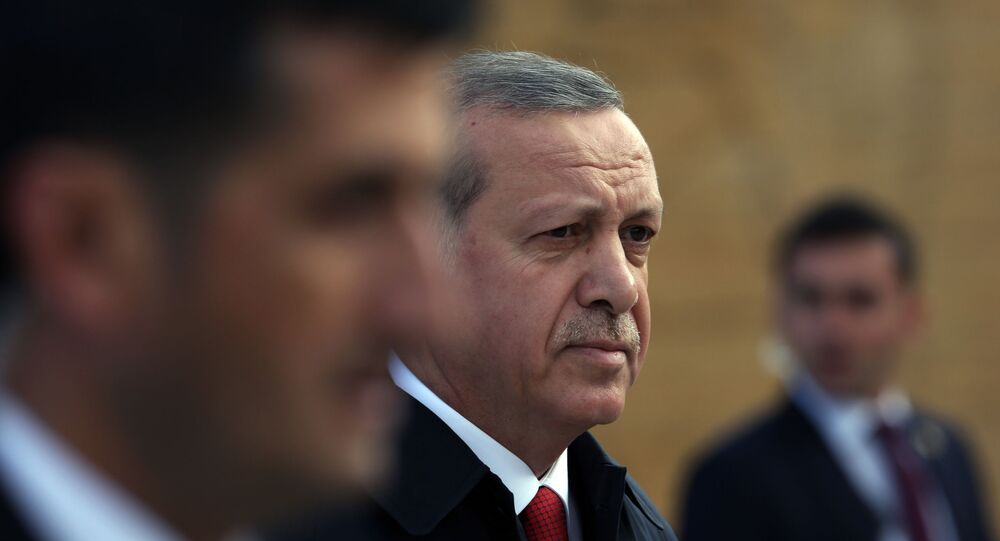 Erdogan Slams Unrest in US' So-Called Cradle of Democracy, Calls It a ‘Disgrace’

Leaders from around the world have expressed shock, outrage and disbelief over the images coming out of Washington, DC on Wednesday of pro-Trump protesters storming the Capitol complex, amid anger over alleged election irregularities in the November vote. Some of the president’s opponents have described the events as an attempted ‘coup’.

Turkish President Recep Tayyip Erdogan has expressed shock over Wednesday’s attack on the Capitol, describing it as a stain on the US brand of democracy.

“This process in the US, a country described as a so-called ‘cradle of democracy’, absolutely shocked all humanity… We see it as a disgrace for democracy,” Erdogan said, speaking to reporters in Istanbul on Friday, his remarks cited by Sputnik Turkey.

“We hope that the transition to Mr Biden on 20 January will be peaceful and that America will go back to being at peace,” Erdogan added, offering his condolences to the families of those killed in Wednesday’s violence, and wishing those injured a speedy recovery.

Erdogan’s comments follow similar remarks by other world leaders and nations, from Boris Johnson of Britain and Emmanuel Macron of France to German Chancellor Angela Merkel and the Chinese Foreign Ministry, who similarly condemned the violence and provided varying degrees of criticism of Donald Trump.

Four protesters and one police officer died after Wednesday’s storming of the Capitol, with many injured and dozens of arrests made. Several of Trump’s opponents in Congress have characterised the events as an attempted ‘coup’, and have threatened to launch impeachment proceedings if Trump’s cabinet doesn’t remove him.

In his remarks on Friday, Erdogan also commented on the agreement between Qatar and the Gulf states to end the blockade of the small Gulf kingdom, hailing it as “very beneficial” for the region. “Lifting this embargo is very appropriate, especially for the Gulf,” Erdogan said. “We hope that our position in Gulf cooperation will be reestablished. This will make Gulf cooperation stronger,” he added.

Turkey established a military base in Qatar in 2017, and supported Doha during the Saudi and Emirati-led blockade of the country in the years since. The countries are united in rejecting the designation of the Muslim Brotherhood* as a terrorist organisation. The transnational Sunni Islamist organisation has been designated a terrorist entity by multiple Gulf States, as well as Egypt, Syria, and Russia and Moscow’s Collective Security Treaty Organisation allies.

© AFP 2020 / ADEM ALTAN
'What Kind of Alliance is This?' Erdogan Blasts US Sanctions as Attack on Turkey's Sovereignty
Relations between Ankara and Washington, who are allies in NATO, have been strained because of a range of issues in recent years, from Turkey’s detention of an American pastor and President Erdogan’s insistence that the US hand over a Muslim preacher it says was responsible for plotting the 2016 coup attempt, to Turkey’s expulsion from the F-35 programme and recent US sanctions over Ankara’s purchase of a Russian-made air-defence system.

Turkey watchers are uncertain what a Biden administration will bring Ankara, divided between those who fear that a US push to ‘reinforce Democratic values’ may widen the rift, and those who suggest the appointment of Turkey-friendly officials to senior posts in the Biden cabinet may “repair” the strained relationship and push the country away from closer ties with Russia.

* A designated terrorist entity outlawed in Russia and many other countries.