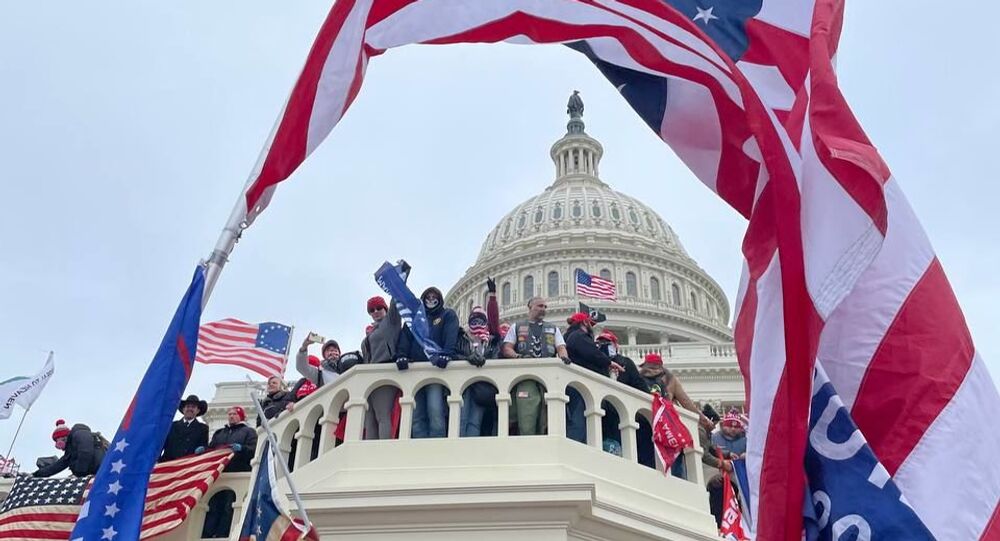 'China is Laughing at Us' After Capitol Storming, Former Envoy to Beijing Says

Pro-Trump protests in Washington DC turned violent on Wednesday, with rioters storming the Capitol Building, the heart of US legislative power. Five people died as a result of the event, that put on hold congressional certification of the results of the November presidential vote. Both Biden and Trump have strongly condemned the rioters’ actions.

“China is laughing at us and saying we’re not the model of democracy and of civility and of stability that we have always been lecturing the rest of the world to embrace,” America’s former ambassador to China, Gary Locke, told CNBC’s ‘The Exchange’ on Thursday, a day after a violent group of protesters had infiltrated the Capitol Building, sporadically occupying both chambers of Congress and damaging property along their way.

© AP Photo / Ng Han Guan
In this Thursday, Feb. 27, 2014, file photo, Gary Locke, the outgoing US ambassador to China, speaks during a farewell news conference held at the US Embassy in Beijing

Their intrusion had interrupted the certification of presidential election results by the congressmen, who were temporarily forced to hide as the mob entered the building. The session resumed later, with Vice President Mike Pence effectively validating Joe Biden’s victory and paving the way for his presidential inauguration on 20 January.

According to Locke, who had served as an envoy to China for nearly three years, from 2011 to 2014, under the Barack Obama administration, the event had undermined America’s repeated schooling of other nations about democracy.

“For so long, we have always been preaching to other countries to uphold the rule of law, to allow governments to transfer power after an election, to make sure the military doesn’t step in and overthrow governments because they didn’t like the election,” the ex-envoy said.

Locke argued that it was other global powers that were now “preaching” to the United States.

“Now, we have all these other countries around the world ... expressing concern about what has happened in America, urging Americans to observe the rule of law and to respect the peaceful transfer of power and abide by the elections,” the former Democratic governor of Washington added.

Following chaotic rambles in America’s main legislative body, that saw rioters making themselves comfortable at the desk of the House Speaker Nancy Pelosi, taking selfies and turning the building into a mess, China’s state tabloid the Global Times posted a side-by-side comparison of scenes from Hong Kong’s storming of the city’s Legislative Council by protesters back in July 2019 with the Washington riot.

In a tweet, the media recalled Pelosi’s praise of the Hong Kong demonstrations, which were vocally endorsed by the Western nations.

“@SpeakerPelosi once referred to the Hong Kong riots as "a beautiful sight to behold" — it remains yet to be seen whether she will say the same about the recent developments in Capitol Hill,” the outlet argued.

.@SpeakerPelosi once referred to the Hong Kong riots as "a beautiful sight to behold" — it remains yet to be seen whether she will say the same about the recent developments in Capitol Hill. pic.twitter.com/91iXDzYpcO

The Chinese foreign ministry sent a similar vibe, with spokeswoman Hua Chinying noting during a press briefing on Thursday that there was a big difference in the choice of words used by the US mainstream media when covering the Hong Kong protests and the Washington riot.

“…such a sharp contrast (in reactions) and the reasons behind it makes one ponder, and deserves serious and profound reflection,” the official added.

The 6 January event has provoked a serious mood change in Washington. A number of congressmen have called on VP Mike Pence to invoke the 25th Amendment and oust Donald Trump from office or launch a new impeachment round against POTUS, just 13 days before his presidency is set to end.

Trump, who announced to the Washington crowd that he would “never” concede the election to Joe Biden just several hours before the riot got out of control, published a video the next day, decrying the unrest and confirming that the “smooth” transition to the next US president will take place on 20 January.

Four protesters and one police have died as a result of the riots, and dozens more were severely injured. A woman, identified as 35-year-old Air Force veteran Ashli Babbitt, was shot dead by a law enforcement agent, while another three participants have died from “separate medical emergencies”, officials said. A Capitol Police officer died the next day in hospital as a result of his injuries.