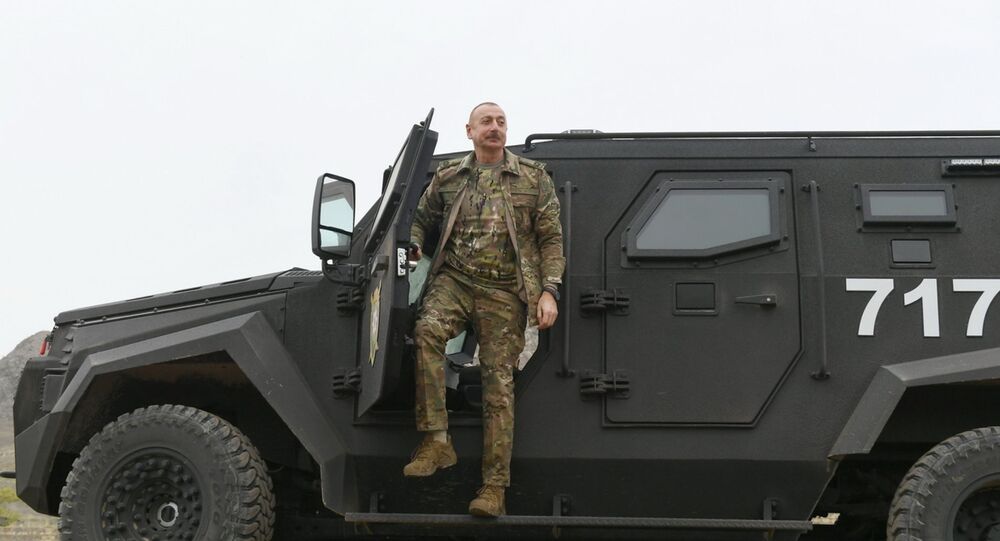 The frozen conflict between Azerbaijan and Armenia for the contested South Caucasus region of Nagorno-Karabakh exploded into open warfare between late September and mid-November 2020. Azerbaijan regained control over territories lost in the 1992-1994 war. Fighting was halted after the signing of a Russian-brokered ceasefire.

Azerbaijani President Ilham Aliyev has expressed annoyance over Armenian officials’ visits to Nagorno-Karabakh, warning Yerevan that it could face a military response if the visits continue.

“I was informed that the Armenian Foreign Minister paid a visit to Khankendi [Stepanakert]. What are you doing there? Armenia should not forget about the war. Remember that the iron fist remains in place. These visits must end. We warn you that if such provocative steps are taken again, Armenia will regret it even more,” Aliyev said, speaking at a meeting Thursday discussing the main events of 2020.

According to the Azerbaijani president, all future visits to Nagorno-Karabakh by any foreign nationals must be approved by Baku.

“The whole world recognises this territory as an integral part of Azerbaijan. No foreign citizen can enter this zone without our permission. No international organisation, except the Red Cross, can travel there. We warned them first through the foreign ministry. Afterwards, the warning would come in another way,” Aliyev said, without elaborating.

Although Armenia provides economic and military support for Nagorno-Karabakh, the landlocked majority-ethnic Armenian-populated region is formally governed by the Republic of Artsakh, an unrecognised breakaway republic established as an enclave within Azerbaijan.

The region became contested by Azerbaijanis and Armenians after the fall of the Russian Empire, but the conflict was frozen by Soviet authorities in the early 1920s, with Moscow turning Nagorno-Karabakh into an autonomous region within the Azerbaijani Soviet Republic. In the late 1980s, nationalist sentiments unleashed by perestroika led dormant tensions to gain new impetus, with Karabakh Armenians accusing Baku of discrimination and launching a petition to break off from Soviet Azerbaijan to join the Armenian Soviet Socialist Republic proper. Baku tried to stop this from happening, and in late 1991 its parliament formally abolished Karabakh’s autonomous status.

Between 1992 and 1994, Azerbaijan and Armenia waged a bloody war for control of the region, with the conflict killing over 40,000 people, and displacing over 1.1 million others, both within the breakaway region and from both republics. The flare-up in 2020 led to the deaths of thousands of servicemen, as well as over 160 civilians, from both sides.

Kremlin: Putin 'Spent Many Days With Phone in Hand' to End Bloodshed in Karabakh