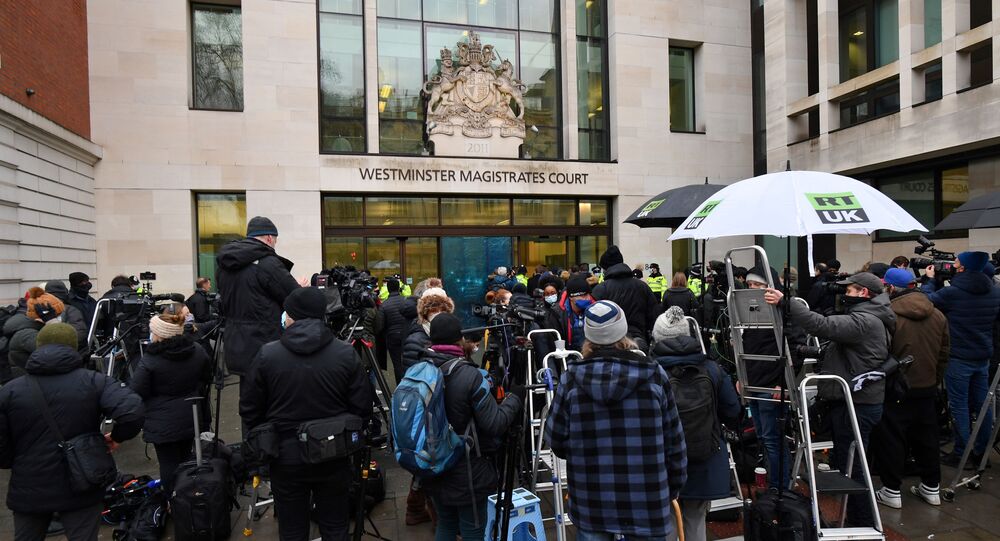 LONDON (Sputnik) – Supporters of Julian Assange said they were disappointed with UK district judge Vanessa Baraitser’s decision to deny bail to the WikiLeaks founder only 48 hours after she had rejected the extradition request filed by the US government.

"Totally disappointed because of the huge contradiction in today's decision compared to what she had ruled on Monday," former Ecuadorean consul Fidel Narvaez said outside the Westminster Magistrates Courts, where the bail hearing was held.

Narvaez, who was very close to Assange during most part of the seven years the whistleblower was holed up in Ecuador's embassy in London, recalled that the judge ruled against extradition based on Assange's health conditions and then said that he must remain in prison.

"He has won his case now. He is not serving any sentence, he doesn't have anything to answer to justice as it stands now, so why is he kept in prison?" the former consul asked.

"We're all disappointed because we expected that after rejecting extradition on Monday the court would grant bail today," the former UK ambassador to Uzbekistan said.

For Murray, who is very close to Assange's legal team, the idea that somebody was barred from being extradited but still has to remain in a high-security prison while that decision is being appealed does not seem "logical," but rather "unfair and unusual."

Both Narvaez and Murray hope that Baraitser’s decision will be overturned by a higher court following an appeal by the whistleblower's lawyers.

"This is not the end of the road. There will be an appeal for today's decision and let's hope a superior court will have more sense of justice", Narvaez said.

The UK district judge denied bail on the grounds that Assange had previously violated bail conditions in 2012 when he was being investigated for alleged sexual charges in Sweden and sought asylum in the Ecuadorean embassy to avoid being extradited.

"I am satisfied that there are substantial grounds for believing that if Mr Assange is released today he would fail to surrender to court to face the appeal proceedings," she said.

Following his arrest at the Ecuadorean embassy in April 2019, Assange was sentenced to 50 weeks in prison for skipping bail and after he served his time, the UK court ruled that he should remain in prison until the extradition case ends.

At Wednesday's hearing, the US prosecutors confirmed that they will appeal the judge's ruling against extradition, prompting fears the case may be in UK courts for months.

The US Department of Justice is seeking the extradition of Assange on 17 espionage charges and one count of computer misuse, which carry a maximum sentence of 175 years in prison, following the publication of classified information on the US wars in Iraq and Afghanistan as well as thousands of US diplomatic cables between 2010 and 2011.