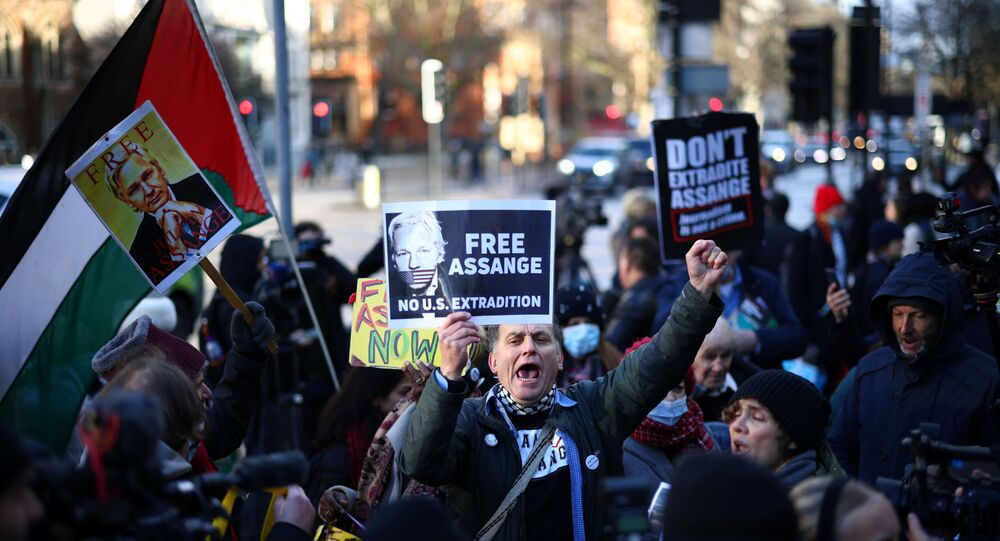 MOSCOW (Sputnik) - The decision by Westminster Magistrates' Court to refuse to release Julian Assange on bail after ruling against his extradition to the US is an "unnecessary, cruel decision," as the whistleblower’s health is at risk and he should not remain behind bars for another moment, a representative of Reporters Without Borders (RSF) said.

"[Judge Baraitser believes that] the COVID-19 situation is under control. So she did not see any risks of [Julian Assange] remaining [in a high-security prison]. We, Reporters Without Borders (RSF), seriously disagree with that assessment. He is clearly at risk of proliferation of COVID-19 infections," the RSF representative said.

She added that Judge Baraitser at the Old Bailey earlier in the week had recognised that Assange's "mental health issues are serious," which prevents his extradition.

@Rebecca_Vincent of @RSF_inter
"condemned" the justice's decision to refuse Assange bail as "unnecessarily cruel" saying that he should be freed from prison and reunited with his family.

Having conceded "serious mental health issues", the RSF representative ​said that that should also be "grounds for [Assange's] release now because everything that [Judge Baraitser] outlined in detail will be exacerbated by a period of prolonged detention. So for me it is unnecessary, cruel decision," she continued.

According to the RSF representative, the justice "has been very harsh along the way," as she has denied sometimes "even smaller decisions that could have made things more humane for Mr Assange."

"He was held like a violent criminal or a terrorist through his proceedings," she added.

​When asked about the prospect Assange’s team might lose its appeal against bail being denied leaving Assange languishing in Belmarsh until the appeals process is exhausted, she said that it is "completely unacceptable, he should not remain behind bars for another moment, let alone months."

Earlier on Wednesday, UK district judge Vanessa Baraitser denied the whistleblower bail on the grounds that he had previously violated bail conditions. Two days before that, she ruled against extraditing Assange, citing health reasons and the risk of his suicide in the US prison system. The US is going to appeal the ruling, which may take months, if not more than a year.