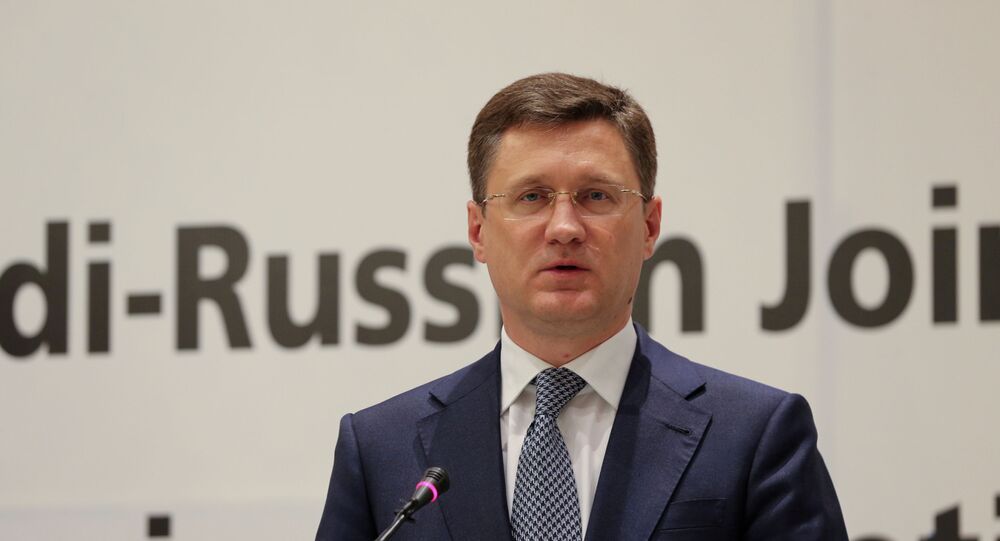 MOSCOW (Sputnik) - Russian Deputy Prime Minister Alexander Novak on Tuesday described Saudi Arabia's extra cut in oil output as a New Year’s gift that is meant to accelerate the reduction of excess reserves in the market.

"This seems to be a kind of a New Year's gift that has been presented to the oil market today, to reduce the stocks at a faster pace. And, of course, we believe that Saudi Arabia is making a very big, significant contribution to restoring the normal level of reserves in world markets," Novak said at a press conference following the Organization of the Petroleum Exporting Countries (OPEC+) meeting.

Novak added that oil demand is growing despite lockdowns and other virus-related uncertainties, and Russia feels the sector's desire for a gradual and careful rise.

"Demand ... is gradually recovering, despite all uncertainties and despite new lockdowns. But we can see that lockdowns are not so tough today. Therefore, certainly, we believe that in the future we gradually need — while taking into account the market situation — to monitor the situation and move forward to restore the production that has been very much reduced compared to our normal level. And this is the desire of the sector, the desire of oil companies," Novak said at the press conference.

Moreover, OPEC confirmed that only Russia and Kazakhstan had been allowed to slightly increase production over the next two months, while the other participants in the OPEC+ deal would keep slashing the same amount of oil as in January.

On Tuesday, the Kazakh Energy Ministry said that Russia and Kazakhstan had been singled out for an increase in oil output in February and March under the OPEC+ deal.

"The Meeting acknowledged the need to gradually return 2 mb/d [million barrels a day] to the market, with the pace being determined according to market conditions. It reconfirmed the decision made at the 12th OPEC+ Ministerial Meeting to increase production by 0.5 mb/d starting in January 2021, and adjusting production from 7.7 mb/d to 7.2 mb/d," the statement on the results of the OPEC+ Ministerial Meeting read.

A source in the Central Asian nation’s petroleum industry explained to Sputnik that the increase was calculated based on the countries' annual production figures. Kazakhstan produces 85.5 million tonnes of oil and Russia 560 million tonnes.

Overall, the level of oil production cuts would ease from 7.2 million barrels a day in January to 7.125 mb/d in February and 7.05 mb/d in March.

At the same time, the underperformers with the oil cuts quotas will need to submit their plans on offsetting the shortcomings by January 15, according to the statement.

Iran to Put Into Service Pipeline Bypassing Strait of Hormuz to Export Oil in 2021, President Says