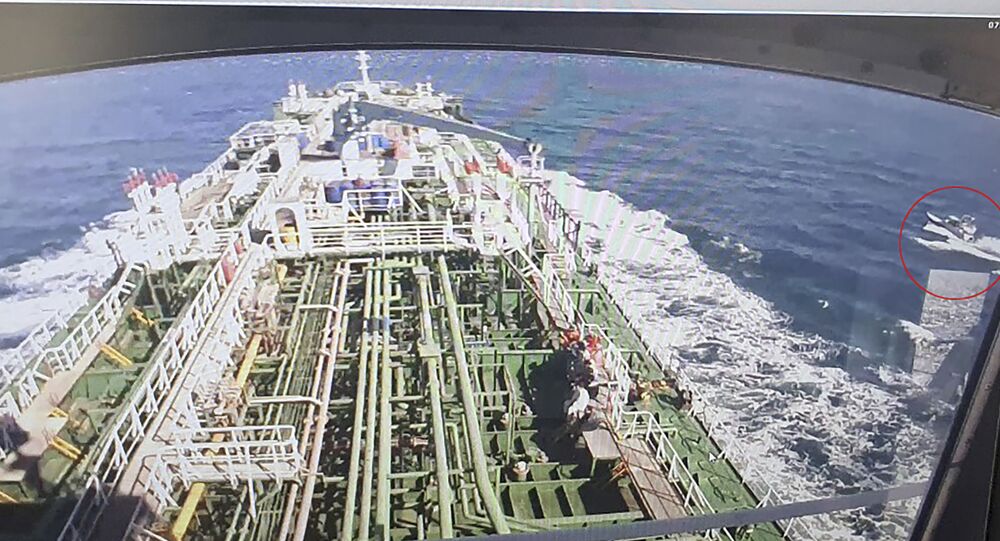 Iran insists the tanker has been held over environmental violations, while the tanker's operator DM Shipping denied that the vessel had polluted waters when the Islamic Revolutionary Guard Corps seized it near the strategically important Strait of Hormuz on Monday.

A South Korean warship has arrived in waters near the Strait of Hormuz, where a Korean-flagged tanker was seized by Iran's Islamic Revolutionary Guard Corps (IRGC) on Monday over alleged environmental violations. The vessel is currently being held in the Iranian port city of Bandar Abbas.

The destroyer Choi Young with members of the Cheonghae anti-piracy unit on board was sent to the area after Seoul demanded the immediate release of the Hankuk Chemi tanker, which reportedly has a 20-member-strong crew of five South Koreans, 11 Myanmarese, two Indonesians, and two Vietnamese individuals.

South Korean Foreign Ministry sources were cited by the Yonhap news agency as saying there were no plans to stage a military operation to free the crew, a day after the IRGC said they had taken control of the vessel because it was "polluting the Persian Gulf with chemicals". The tanker's operator DM Shipping denies the allegations.

"The issue should be resolved through diplomacy. The [anti-piracy] unit is focused on the safety of our people who use the waterway after the seizure", one of the sources said.

They were echoed by South Korean Foreign Ministry spokesperson Boo Seung-chan who said that the Choi Young destroyer is "carrying out missions to ensure the safety of our nationals".

#Iran’s IRGC officially confirmed that its navy seized South Korean tanker "China Hankok" this morning for polluting environment. The vessel was en route from the port of Al-Jubail in Saudi Arabia to South Korea, carrying 7,200 tons of ethanol.#SouthKorea pic.twitter.com/Dk1bDSb2OL

South Korean Foreign Minister Kang Kyung-wha, for her part, underscored that "verifying the facts and ensuring the safety of the crew members remains a key priority".

"We have been trying to figure out what happened through the Iranian Embassy in South Korea and the South Korean Embassy in Iran and are continuing to make efforts to address the situation", she pointed out.

The tanker's owner earlier claimed the IRGC stormed the Hankuk Chemi, forcing the vessel to change course and travel to Iran, something rejected by the Islamic Republic, who argues that the ship was stopped because it allegedly polluted waters near the Strait of Hormuz.

The developments come as Iranian government spokesman Ali Rabiei rejected claims the seizure of the tanker was tantamount to hostage-taking, amid reports that Tehran wanted to use funds frozen in a South Korean bank to buy coronavirus vaccines for the Iranian population.

"We've become used to such allegations […], but if there is any hostage-taking, it is Korea's government that is holding $7 billion which belongs to us hostage on baseless grounds", Rabiei told reporters.

The statement was preceded by a US State Department spokesperson slamming the vessel's detention as "part of a clear attempt to extort the international community". According to the spokesperson, the US "joins the Republic of Korea's call for Iran to immediately release the tanker".

© Photo : Twitter / @Fintribune
Seoul Sends Anti-Piracy Unit to Persian Gulf After Iran Seizes S. Korean Vessel Over Water Pollution
The vessel was detained amid ongoing tensions between Washington and Tehran, which escalated after top Iranian general Qasem Soleimani was assassinated in a US drone strike near the Baghdad International Airport on 3 January 2020.

Monday's incident was preceded by the IRGC detaining the British-flagged oil tanker Stena Impero in the Strait of Hormuz in July 2019 for allegedly ramming a fishing boat.

Iran moved to release the ship two months later, denying allegations that its seizure was a tit-for-tat against Gibraltar previously seizing an Iranian tanker suspected of violating EU sanctions against Syria.