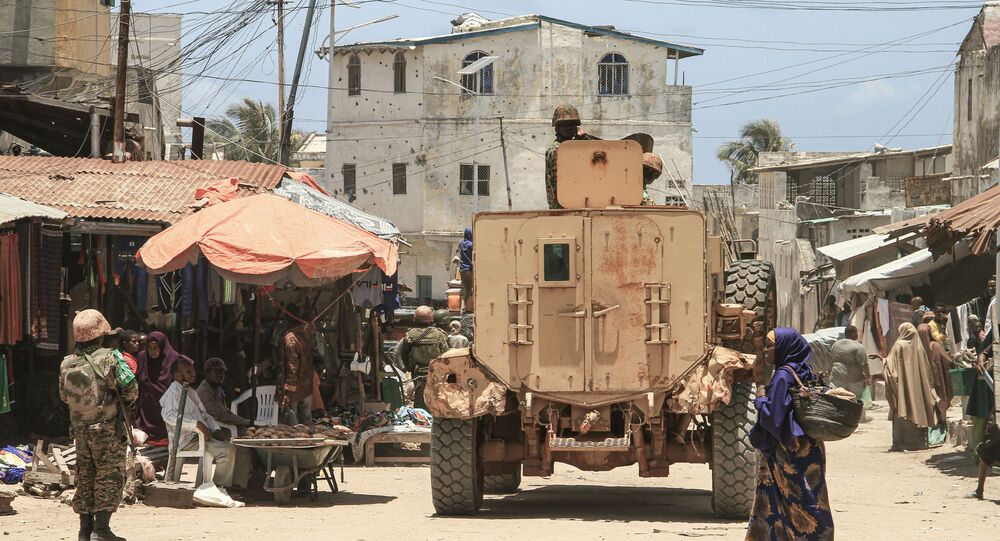 MOSCOW (Sputnik) - Russia can assume a more active role in ensuring maritime security in the Indian Ocean adjacent to Somalia after the US has decided to withdraw its troops from the African country, Admiral Ravindra Chandrasiri Wijegunaratne, the former сhief of defence staff of the Sri Lanka Armed Forces and the Sri Lankan Navy’s commander, said.

"Possible US troop withdrawal for Somalia has raised concerns. Even small number of pirates are able to create a perception of threat to the entire Indian Ocean region at a critical maritime choke point … I feel Russia also should take active role off Somalia," Wijegunaratne said.

Even though the international forces have managed to curb the Somalian pirate attacks in recent years, the threat of piracy in the Indian Ocean still exists and Sri Lanka is exposed to it, the the former naval official said.

"The presence of multinational naval forces in the Gulf of Aden reduced the incidence of piracy attacks, but they may increase with multinational navy shift in focus as they are going to change their role from ‘anti-piracy’ more towards ‘regional security’," Wijegunaratne added.

Earlier in the month, outgoing US President Donald Trump  ordered withdrawal of almost all US troops from Somalia. The Defense Department said some troops might be reassigned to other parts of Africa.

The waters off the Horn of Africa have been a hotspot of pirate activity over the past decade owing to continuing turmoil Somalia and the resulting social deprivation. The region’s proximity to the Red Sea, which leads the Mediterranean through the Suez Canal, makes its maritime security an especially sensitive area in the global trade.

Russia may help Sri Lanka keep the Indian Ocean peaceful amid the escalation of tensions between China and India, with whom both Colombo and Moscow maintain good relations, Admiral Ravindra Chandrasiri Wijegunaratne said.

"The escalation of China-India conflict impacts not only Sri Lanka, but the whole region. It will not be limited to the area of dispute - the border region - but will impact global trade. Any disruption global supply chain and energy will result in global economic repercussions which will affect us all … Russia can help the Sri Lankan foreign policy to keep status of Indian Ocean a ‘zone of peace’ within a clear legal and security framework," Wijegunaratne said.

Sri Lanka is sticking to the non-aligned foreign policy and sees the importance of maintaining good relations with India and China, its major trade partners, the former military official noted.

"Being neutral allows Sri Lanka to have a much more flexible foreign policy, like India. The word ‘neutrality’ came to be our foreign policy mainly due to India’s traditional policy shift to a non-aligned movement as it was limited in flexibility and action when dealing with China and when there is no clear power blocks like in the Cold War," Wijegunaratne said.

Russia, on its part, should continue its efforts to mediate the conflict between India and China as it enjoys a balanced approach towards maintaining relations with the both countries, according to the admiral.

"Russia can mediate concerns of both countries with a balanced diplomatic effort on equal terms. The leadership initiative is necessary to maintain a favorable international order, in which the exercise of great power competition is constrained or regulated through multilateral institutions, rules and norms," Wijegunaratne stressed.

Border conflicts are a permanent fixture of India-China relations, as the countries do not have a marked border but rather the Line of Actual Control, created after the 1962 war between the nations. However, the tensions became more strained as a result of skirmishes that started in late May between the countries' border forces. Despite the countries' diplomats and military officials engaging in talks to de-escalate tensions, both sides have continued to boost their forces in the region.

Sri Lanka should continue to refrain from hosting any foreign military bases as it needs to maintain good relations with all global powers, especially India, and stay out of geopolitical tensions, Chandrasiri Wijegunaratne said.

"No foreign bases will be the best answer with our own domestic and international issues. Sri Lanka is vital to strategic stake for India, it cannot afford to be the national sovereignty and security concern to India. Our leaders will strictly follow a ‘non-aligned’ status at all times. Sri Lanka is a very attractive tourist destination. We want to be friend of all and have no enemies," Wijegunaratne said.

Despite Sri Lanka’s strategic location in the middle of major trade routes in the Indian Ocean, it "comes with some challenges to be a non-aligned neutral nation and to navigate carefully in this complex geopolitical and potential future area of conflict of interest," the former military official stressed.

Over the years, there have been reports that the United States might be seeking to set up a military base in Sri Lanka. At the same time, the US leadership has accused China of trying to create a military base at the Hambantota Port, which Colombo leased to Beijing for 99 years after failing to repay the debts. However, the Sri Lankan authorities have maintained that the port is used only for commercial purposes.