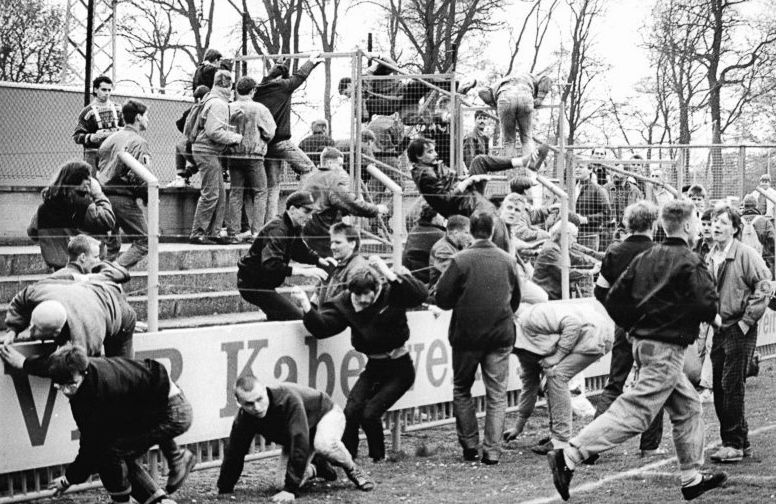 Dressed to Kill: Why the Most Fashionable Football Hooligans Used to Wear Pierre Cardin

French fashion designer Pierre Cardin has died aged 98. But why did his clothes became “must have” accessories for British football hooligans in the 1980s?

Tributes have been flooding in for Pierre Cardin, who was among the first to design 'ready-to-wear' collections in the late 1950s.

A designer with great business acumen, he became the king of designer merchandising in the 1970s and 80s.

​​But one little remembered fact is that in the darkest days of football violence - 1980 to 1989 - Pierre Cardin was one of the most sought after brands for any self-respecting English, Scottish or Welsh hooligan.

Dougie Brimson, an author and writer of cult football hooligan film Green Street, said clothes by designers like Pierre Cardin were a vital part of the “casual” culture.

I can still remember my Pierre Cardin jumper now when I hung around with some Casuals in 84/85. I thought I was the bees knees. #RipPierreCardin https://t.co/KEpA6jYBrj

"In essence, the casual scene is the only youth culture to grow out of anything but music. It grew out of the football hooligan scene and was a way of effectively branding yourself as a cut above the average," ​he told Sputnik.

Mr Brimson said: "If you wore the gear you weren’t afraid to be involved in confrontations, even violence. In short, it was about identity. Thus the more expensive the label, the better and more committed you were."

He said casuals often shoplifted clothes while on football trips to other towns or while following their teams abroad in the European Cup or Uefa Cup.

​"At times you could even tell who was from what club or firm by the labels they wore. Be they Ellesse, Lacoste, Tacchini, Kappa, Fila, Pringle, Burberry or latterly Stone Island," said Mr Brimson, who followed Watford.

In the 1980s all of England’s football clubs and several in Scotland had “firms” - groups of ultras who would fight rivals on the terraces or on the way to or from the game.

Funny that, used to be Celtic casuals back in the day that were slagged off for wearing Pierre Cardin. 😆

All of these firms would be dressed from head-to-toe in haute couture by Pierre Cardin or other top designers.

Mr Brimson said the origins of the casual culture were a cause of “fierce debate” with both Liverpool and Aberdeen fans claiming they started it by funding their European trips with a spot of creative shoplifting in France and Italy and then selling the stolen clothes back in Britain.

Mr Brimson said: "Wherever and how ever it started, it quickly spread and in many ways defined the early 80s for those of us who spent Saturdays on the terraces."

England’s clubs were banned from Europe after the Heysel Stadium disaster in 1985 and four years later hooligans were falsely blamed by The Sun newspaper for the Hillsborough disaster.

Hillsborough led to all-seater stadia and the “English disease” of football hooliganism gradually died out in the early 1990s with the sport becoming safer and more popular with families.

The casual culture also died out although the fondness for that era among many middle-aged British football fans was shown on social media in the wake of Pierre Cardin’s death on Tuesday, 29 December.