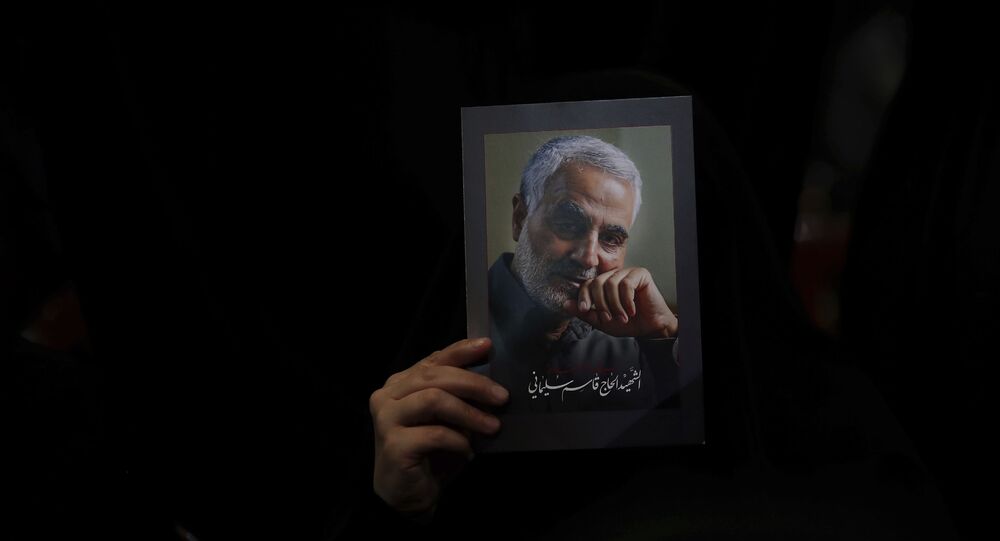 The report comes as the anniversary of the Iranian top military commander's death approaches, raising media speculation about possible military strikes in the region.

New names have been added to the list of American individuals reportedly involved in the assassination of Islamic Revolution Guard Corps (IRGC) commander Qasem Soleimani, Tasnim News reported on Sunday.

According to the spokesman for the Popular Committee for the Celebration of the Anniversary of the Martyrdom of General Soleimani, the number of individuals on the list has been raised from 45 to 48, and six countries have been given warrants for the arrest of the alleged culprits.

Earlier this week, Brigadier General Mohammad Hejazi from the IRGC stated that "harsh revenge" for Soleimani's assassination has remained Tehran's priority, noting that retaliatory missile attacks on US military bases in Iraq in January were "only slaps".

Last Sunday, the US embassy compound in Baghdad came under rocket attack, which killed a local civilian, while no embassy personnel were injured. US Secretary of State Mike Pompeo blamed "Iran-backed militias" for conducting the strike. Tehran has dismissed the accusations.

The U.S. military presence is the source of instability in our region. No amount of spin can divert blame for its evils.

The region has recently seen a series of military manoeuvres, apparently as a show of force toward Iran following the heightened tensions. On Monday, 21 December, the nuclear-powered submarine USS Georgia entered the Persian Gulf through the Strait of Hormuz in what was perceived as a warning sign to Iran. Earlier, an IDF Navy submarine demonstratively crossed the Suez Canal above water as another show of force aimed at Iran. The Israeli military refused to comment on the reports, while IDF Chief of Staff Aviv Kohavi was quoted by The Times of Israel as saying that Israel would retaliate against any aggressive move by Iran.

Speculation that a military strike is possible on the part of Iran followed the assassination of prominent Iranian nuclear physicist Mohsen Fakhrizadeh. Iranian officials have claimed the Israeli intelligence agency Mossad was behind the attack on the scientist.

Terror attack on our scientist was indubitably designed & planned by a terrorist regime & executed by criminal accomplices.
Shameful that some refuse to stand against terrorism and hide behind calls for restraint.
Impunity emboldens a terrorist regime with aggression in its DNA.

While Tel Aviv has neither dismissed nor confirmed the allegations, the Israeli government had previously claimed Fakhrizadeh headed a secret unit within the Iranian military allegedly working on a nuke. Iran has repeatedly stated its nuclear programme serves purely peaceful purposes.

Soleimani was killed in a targeted attack carried out by the United States on 3 January 2020. The Trump administration accused him of plotting attacks against US assets in the region. Days later, Iran launched over a dozen ballistic missiles at a pair of US bases in Iraq, giving over 100 American military personnel traumatic brain injuries. Iranian officials have also repeatedly warned of further revenge attacks.

In August, a senior Revolutionary Guard commander suggested that the main reason Tehran had not taken revenge on the US by assassinating a high-ranking military official was that it had not been able to "find anyone who is equally valuable".

Iran's Revolutionary Guards Chief Commander, Hossein Salami, said in September on the guard’s website that Tehran will avenge the US killing of its top commander General Qasem Soleimani by targeting those involved in an "honourable" retaliation.

Soleimani was considered a highly-respected person in Iran, praised for combatting militant and terrorist groups in the Middle East and considered an architect of the country's modern security infrastructure.