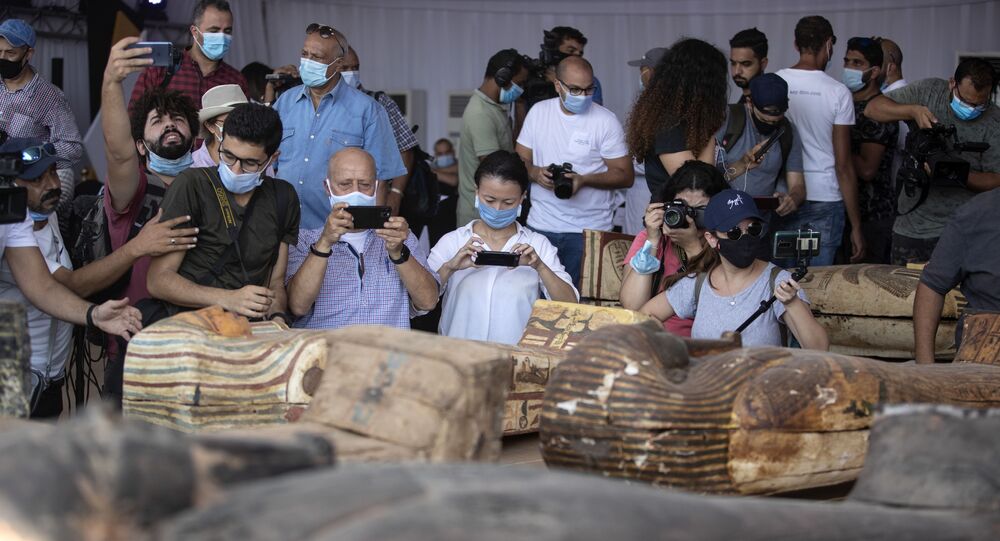 Pharaonic Treasures: Egyptologists Assure Much More Yet to Be Unearthed Around Saqqara Necropolis

Ancient Egypt’s sprawling desert site just outside Cairo has recently been attracting whole teams of archaeologists, with the outgoing year of 2020 being especially rich in successful digging efforts.

Vast caches of sealed ancient coffins, still intact and housing well-preserved mummies, have been discovered in Egypt’s Saqqara necropolis, one of the most renowned pharaonic sites in the country, and there is considerably more there to dig out, the Financial Times reported, citing Mostafa Waziri, head of the Supreme Council for Antiquities, who has led several of the latest efforts.

“Saqqara is very rich, and there is still more to find. I think we can work on it for another hundred years”, Waziri shared about the 5,000-year-old site, which is a stone’s throw from both the Pyramids of Giza and the old capital city of Memphis.

The researcher brought to the fore the outstanding archaeological discoveries made there over the past two years, namely, the abundantly adorned tomb of Wahte, a priest who lived in the 25th century BC, caches of gilded statues, and even an embalmed lion cub.

As per Waziri, the colourful decorations on some of the newly spotted coffins – mainly from what is dated as the Late Period from about 664 BC to 332 BC – suggest they likely belonged to top-ranking officials.

Among the most remarkable monuments still dominating the skyline of Saqqara is King Zoser’s so-called step pyramid – the earliest pyramid and the first stone building in Egyptian history.

“Once Zoser was buried there, Saqqara became even more important because there was a greater reason for people to choose to be buried there to benefit from the blessings of the king”, said Salima Ikram, professor of Egyptology at the American University in Cairo. “It remained a cemetery way into the 8th century AD”.

There are yet more burial shafts to comb through, researchers say. Quite a few were stumbled upon in a part of Saqqara called the Bubasteion, which at one point in history featured a temple dedicated to Bastet, a widely worshipped goddess of love and motherhood often depicted in the form of a cat.

“If we look at the contents of each shaft in its entirety and compare the texts on the coffins, we could tell if the people inside are related because of bloodlines, trade and priestly association”, explained Ikram.

The newly spotted coffins will be exhibited at a series of new museums, including one in the resort town of Sharm el-Sheikh and in the huge Grand Egyptian Museum in Cairo that is scheduled to open in 2021, as Egypt scrambles to fight a severe drop in tourism caused by the coronavirus pandemic this year.