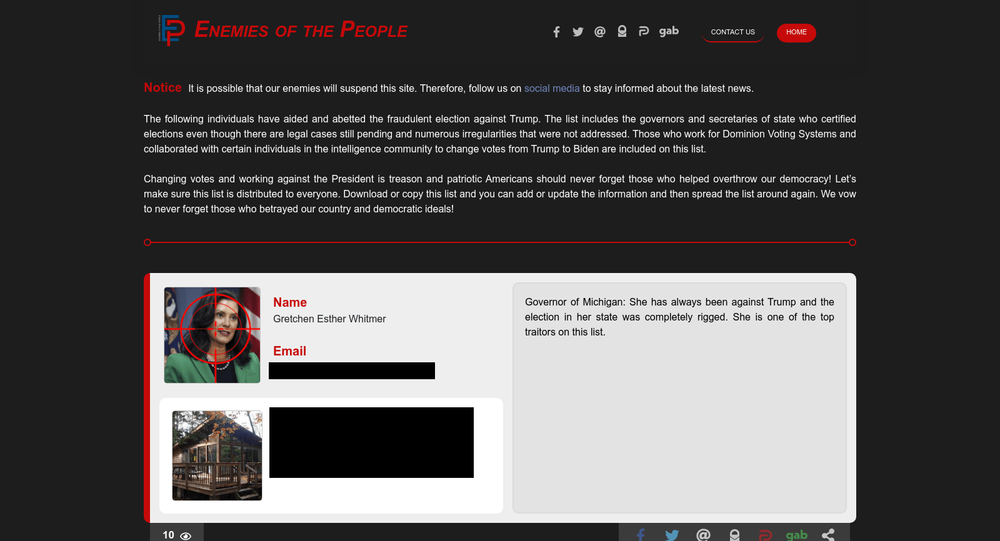 This is the second time Iran has been accused of ‘meddling’ in the 2020 US election.

The Federal Bureau of Investigation has concluded that Iran was responsible for an online ‘Enemies of the People’ website listing the names, pictures, home addresses and other personal information of federal and state officials who rejected President Donald Trump’s election fraud claims, the Washington Post has reported, citing anonymous sources.

“We have known since day one that foreign actors seek to undermine trust in the United States’ elections process,” one source told the newspaper. “President Trump has perpetuated a false narrative that has allowed this type of foreign attack to penetrate the minds of American citizens,” the source added.

The website, created by a shadowy group and since taken down, proposed the assassination of senior officials and leaders of both the Republican and Democratic parties, as well as election officials, whom they alleged were complicit in manipulating the 2020 election in Joe Biden’s favour.

Among the targets were FBI director Christopher Wray and former Cybersecurity and Infrastructure Security Agency chief Christopher Krebs, the governors of the battleground states of Georgia, Pennsylvania, Wisconsin, Nevada and Michigan, voting machine company executives, and others, such as Georgia Republican Secretary of State Brad Raffensperger.

The virtual campaign also reportedly used the Twitter hashtags #remembertheirfaces and #NoQuarterForTraitors, although a cursory search of the hashtags shows them to have been used long before the 3 November vote, and for a variety of purposes unrelated to the hit list.

One state official told the newspaper that the FBI called individuals whose names appeared on the website and told them that Iran was behind the website.

This is the second time US officials have blamed Iran for meddling in the 2020 vote. In October, Director of National Intelligence John Ratcliffe claimed Iran had sent incendiary emails to Democratic voters posing as a pro-Trump extremist group and threatening to “come after” anyone who votes Biden.

Iran has yet to respond to the ‘Enemies of the People’ site claims, but blasted the earlier allegations as “malign and dangerous.”

“Unlike the US, Iran does not interfere in other countries’ elections. The world has been witnessing the US’s own desperate public attempts to question the outcome of its own elections at the highest level, Alireza Miryousefi, spokesman from the Iranian Mission to the United Nations, was quoted as saying at the time.

In August, National Counterintelligence and Security Center director Bill Evanina accused Russia, China and Iran of interfering in the US election, with Russia supposedly using “a range of measures to primarily denigrate” Biden, while China was reportedly “expanding its influence efforts” in Biden’s favour. Iran, meanwhile, was accused of “seek[ing] to undermine US democratic institutions” in general and spread disinformation online.

This is the second presidential election in a row that US officials have accused foreign actors of widespread meddling. In 2016, officials accused Moscow of a massive hacking, trolling and influence campaign in Trump’s favour. After three years of investigation and a $32 million Russiagate probe, the claims died on the vine without providing any definitive evidence.

© AP Photo / Steven Senne
WaPo Compared to Nazi Propaganda Over Cartoon Depicting Republicans as Rats
The idea of Democrats and Republicans drawing up competing lists of ‘enemies of the people’ is nothing new in the fallout of from the highly contentious 3 November vote. Earlier this week, conservatives fumed after a Washington Post cartoonist depicted over 100 US state attorneys general and members of Congress as rats for “collaborat[ing] with President Trump in his attempt to subvert the Constitution.” Republicans blasted the cartoon and accused its author of aping Nazi German propaganda.

President Trump continues to refuse to concede the election, accusing Democrats of a systematic campaign of fraud in key swing states involving mail-in vote dumps in the dead of night, voting machine manipulations, and other illegal machinations. Democratic officials, state courts and even some Republicans have rejected the claims and proclaimed Biden the legitimately elected president.