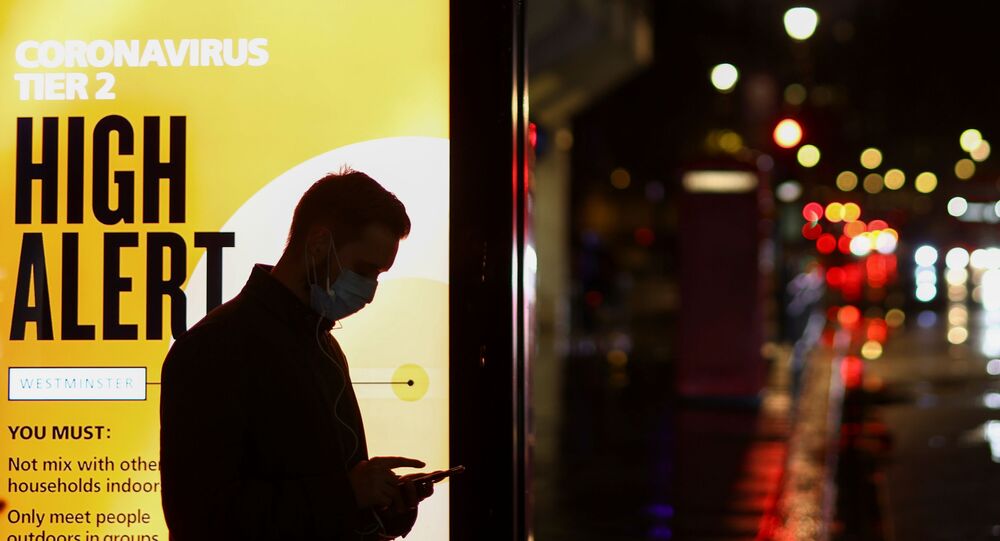 BRUSSELS (Sputnik) Luc Rivet - The new and more contagious strain of coronavirus that was recently discovered in the UK has already been detected in a number of European countries and elsewhere in the world, and it became the most pressing issue both in London and Brussels despite the approaching deadline of the Brexit transition period.

Last week, the UK government announced that the mutated coronavirus strain that can transmit up to 70 percent faster has been actively spreading in London and the surrounding areas. The authorities have responded to the spread of the new strain, named VUI-202012/01, by introducing the highest level of alert in some areas.

The new coronavirus variant, which infects at a more rapid rate but does not appear to be more deadly or pose any concerns for vaccines, has also been detected in the Netherlands, Denmark, Belgium, Italy, South Africa and Australia.

Greece has decided to introduced mandatory testing and a quarantine for UK arrivals.

According to Patrick Vallance, the chief scientific adviser to the UK government, the new COVID-19 variant has caused a sharp increase in hospitalizations in December and seems to have appeared in mid-September in London or Kent.

The newly-discovered strain contains the N501Y mutation, which has already been circulating outside of the UK, according to Dr. Julian Tang from the University of Leicester.

"This N501Y mutation was already circulating sporadically much earlier this year outside the UK, to Australia in June-July, to the US in July and to Brazil in April," Tang told reporters.

Virologist Steven Van Gucht, who chairs the Belgian government's scientific committee for coronavirus, also confirmed to Sputnik that the new variant was identified in the UK in September but its "virulence has been measured" a month later.

"This development and the fact that the variant is already present on the continent is worrying in the present Christmas lockdown. It might help us make people respect the confinement measures during the end-of-year celebrations, because everybody understands how contagious the new variant is," Van Gucht said.

The expert warned that mass gatherings during the festive period may result "in one full month of lockdown." At the same time, the virologist said that the vast majority of Belgians respect the coronavirus response measures.

"A study indicates for Belgium that 79 percent of citizens intend to respect the rules. This is re-assuring. But on the other hand, despite the lockdown, the number of cases increases by an average of 20 percent throughout Belgium. You can imagine what the damage could be with a more contagious strain of the virus," Van Gucht said.

In addition, the expert added that there are no indications that COVID-19 vaccines would be less effective against the new variant.

"The issue should have strictly no effect on the vaccination campaign which will start as soon as next weekend across Europe," the virologist said.

Viruses mutate all the time and experts say that the process is completely normal. Over the past year, more than 20,000 mutations of SARS-CoV-2, a coronavirus strain that causes the COVID-19 disease, have been identified across the world.

In mid-December, the Lancet, a renowned medical journal, published a call, signed by many scientists, for the pan-European commitment to rapid and sustained reduction in new COVID-19 infections.

"[A call to] achieve low case numbers. Aim for a target of no more than ten new COVID-19 cases per million people per day. This target has been reached in many countries, and can be reached again throughout Europe by spring, 2021, at the latest," the Lancet said.

The medical journal called for the European-level synchronization on COVID-19 response to avoid "a ping-pong effect" of importing and re-importing coronavirus cases.

"Local outbreaks require a rapid and rigorous response, including travel restrictions, targeted testing, and possibly regional lockdowns, to achieve a rapid reduction in prevalence," the Lancet said, and called on governments across Europe to set common goals and coordinate efforts.

Meanwhile, Marc Van Ranst, a virologist from Belgium's KU Leuven University, told Sputnik that his country was concerned over the new variant of coronavirus.

"The new British variant which is spreading at high speed currently in the United Kingdom is of great concern to us in Belgium. It has been found in Belgium: four mutations were found in the North of the country between 30 November and 1 December," Van Ranst said.

The virologist said that "everything indicates" that a surge in COVID-19 cases in the UK may be linked to the new variant.

"The virus has adapted to our cells and enters them more easily. This means that more cells are infected. For the moment, there is no evidence that the virus variant is more dangerous. Nevertheless, vigilance remains important. We have analyzed 2,000 samples and found four mutations. On December 1st, three samples came from East Flanders and one from West Flanders [municipalities in Belgium]. We will see in the next few days if more samples are found. It could be very limited, but you have to keep a sharp eye on developments," Van Ranst said.

The virologist added that the decision to suspend air traffic with the UK is a good precautionary measure, as "we are not absolutely sure that the vaccine will protect us against this variant."

According to Pietro Fiocchi, a member of the European Parliament for the Fratelli d'Italia party, the situation around the new mutation is alarming.

"This is extremely worrying. Scientists keep saying that the vaccine will work on all mutations and we should not worry about the vaccines’ efficiency. But can we trust them?" Fiocchi told Sputnik.

The lawmaker added that the situation was also challenging because the pandemic was still on the rise despite lockdown measures in many European countries.

"Most citizens would consider that the present lockdown is the maximum we can humanly tolerate for the economy and the psychological balance of the people. And still, the infection rate still increases," Fiocchi said.

The European lawmaker added that the new variant could lead to a disaster "even before a large part of the population can be vaccinated."

"Also, assuming the vaccines work, how many vaccinated people do we need to slow down the pandemic? Italy only ordered vaccines for maybe 8 percent of the population," Fiocchi said.

The lawmaker also complained that the response to the new challenge is not unified across Europe, as some countries have halted flights to the UK while others did not.

"Moreover, the presence of the new strain of coronavirus has already been observed in Italy, so it is too late to stop it," Fiocchi added.

Meanwhile, Gilles Lebreton, a French member of the European Parliament, said that he was in favor of the temporary closure of borders with the UK.

"Like Marine Le Pen [the leader of the National Rally party], I am in favor of this temporary closure of the borders with the United Kingdom, to slow down the arrival of persons infected with this new and particularly aggressive strain of the virus before the end-of-year holidays," Lebreton told Sputnik.

According to the French lawmaker, President Emmanuel Macron announced the suspension too late, as he was waiting for the decision at the European Union level.

"I regret the procrastination of President Macron, who only made this common-sense decision after Belgium, the Netherlands, Italy and Germany. He would apparently have preferred a decision at EU level!" Lebreton said, adding that Macron belongs to the category of politicians that shy away from making unpopular decisions in hopes that Brussels will announce them.

The lawmaker pointed out that the European Commission has yet to make any proposals on harmonizing a response of the EU member states to the new coronavirus strain.

"This Monday, 21 December, we have not heard a word yet from the European Commission, no proposal of harmonizing measures between the member states, no advice, no nothing. No surprise," Lebreton said.

The French lawmaker said that it is up to "sovereign European states" to respond to the situation. In addition, Lebreton hoped that the vaccination would protect the population from the new contagious variant.