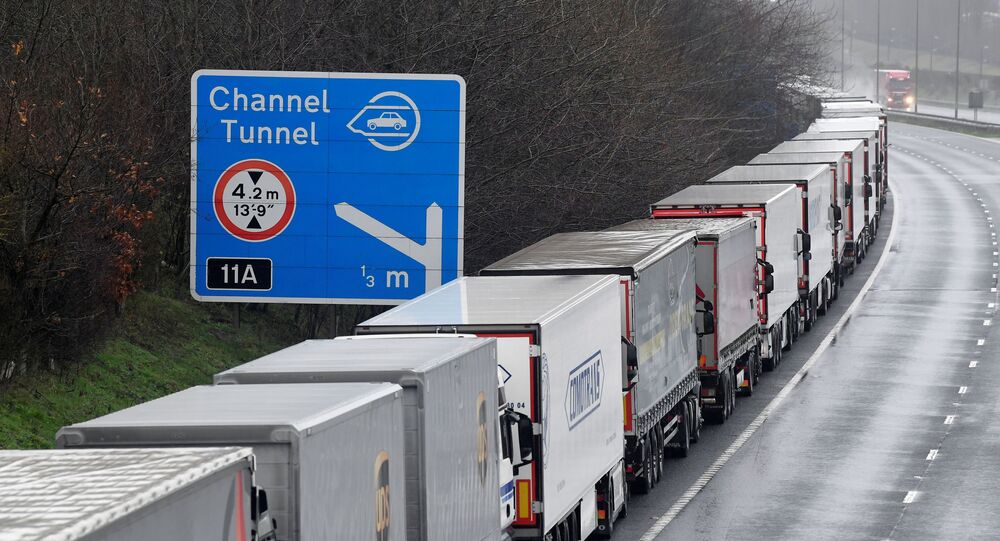 A new strain of coronavirus was early discovered in the United Kingdom, with experts suggesting that the mutated version is more contagious than the original. France responded by suspending traffic with the UK for 48 hours, from Sunday onwards.

The UK’s border with France is set to reopen, despite the snap travel ban issued by Paris on Sunday on travellers and freight coming from the UK after a mutated strain of coronavirus was discovered in the country, according to French Secretary of State for Transport Jean-Baptiste Djebbari.

UK Transport Secretary Grant Shapps warned about the “significant disruption” that could occur across Britain as lorries were queuing to enter France following the announcement that came into effect at 11 p.m. on 20 December.

According to the Guardian report, travel chaos was expected at the border, with “miles of lorry queues” spotted in Kent following the 48-hour ban, just several days before the Christmas holidays.

Kent police have now launched Operation Stack, allowing trucks to queue between the 8th and 11th junctions of M20 to alleviate traffic congestion along the country’s roads.

Following the reports about ongoing delays and chaos at the border, Djebbari said on Monday that “in the next few hours” the EU was planning to set up protocols to resume travel with the United Kingdom.

The long delays are expected even after the ban is lifted, according to the Road Haulage Association (RHA), which said that the situation will only add pressure to ongoing uncertainty over the Brexit trade deal, which hasn't been signed yet.

Dover/Calais is a major UK/EU crossing point and we’ve already seen massive queues. Brexit stockpiling is one thing, the Christmas rush is another but to close borders for 48 hrs is a real hammer blow to the all-important supply chain ⁦@RHARodMcKenzie⁩ ⁦@SkyNews⁩ pic.twitter.com/C4Lru6McWh

​This is especially concerning bearing in mind the volume of goods transported between the countries during the Christmas and New Year’s holidays, most of which are typically perishable and need to be delivered as quickly as possible, according to industry sources.

The UK Department for Transport said that up to 4,000 lorries could be accommodated at Kent’s Manston Airport to prevent the deterioration of the situation but still advised “public and particularly hauliers not to travel to Kent ports or other routes to France”.

“My department is urgently working with Highways England and Kent Council on contingency measures to minimise traffic disruption in the area,” Shapps tweeted.

While France has not banned outgoing freight, few companies are expected to risk sending the goods to Britain in the absence of clarity when the drivers would be back to the country.

However, officials from the Port of Dover confirmed to the Daily Mail that inbound lorries were still coming in from France  despite ongoing concerns.

On Monday, British Prime Minister Boris Johnson will hold an emergency Cobra meeting “to discuss the situation regarding international travel, in particular the steady flow of freight into and out of the UK”, the PM spokesperson said.

France is only one among several countries, including Germany, Belgium, Austria, Denmark and others, which announced a ban on incoming flights from the United Kingdom.

The newly discovered strain, dubbed VUI-202012/01, is believed to have a higher transmission rate than the original coronavirus due to mutations to its spike protein. However, authorities argued that nothing so far has suggested that it could be deadlier or more dangerous than other previously discovered strains.