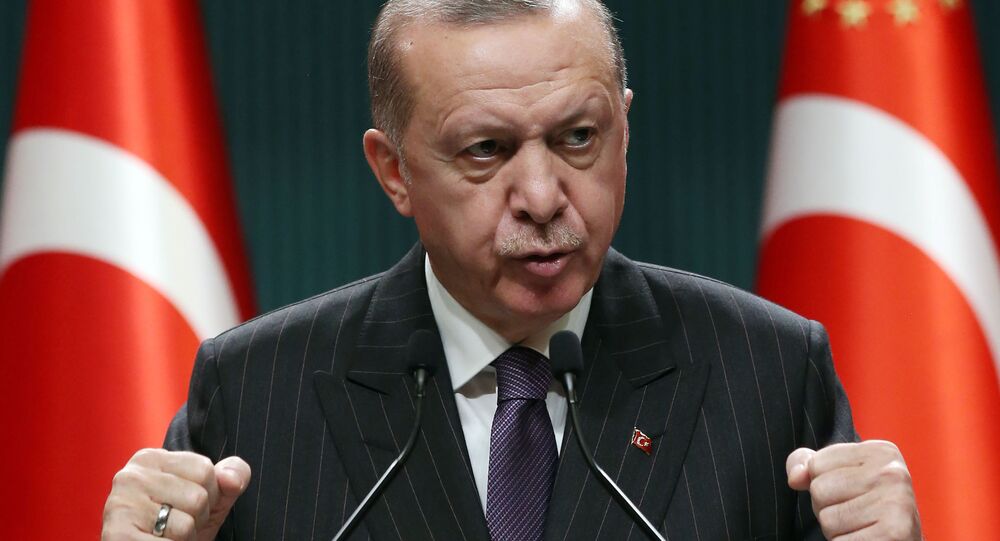 'What Kind of Alliance is This?' Erdogan Blasts US Sanctions as Attack on Turkey's Sovereignty

On Monday, the US Treasury slapped sanctions on four Turkish officials and the Presidency of Defence Industries, a federal office responsible for managing Turkey's defence industries. The restrictions are related to Ankara's purchase of the S-400, an advanced Russian-made air defence system.

Turkish President Recep Tayyip Erdogan has lashed out at Washington over the Countering America's Adversaries Through Sanctions Act (CAATSA) restrictions slapped on his country, suggesting that no other nation except Turkey, a NATO ally, has been subjected to such restrictions.

"What kind of alliance is this? What is this based on?" Erdogan fumed in a televised address from Ankara on Wednesday, calling the restrictions an "open attack against" Turkey's "sovereignty."

"Refusing our conditions for the purchase of their [Patriot] air defence systems, the United States used the sanctions weapon because we purchased them elsewhere," he added.

Warning that sanctions were 'incompatible' with the US-Turkish status as allies, Erdogan announced that Turkey's defence sector would "work two times harder" amid the restrictions, and stressed that Washington 'will not stop' Turkey's efforts.

Erdogan was incorrect in suggesting that CAATSA had never been deployed against any nation except Turkey. In 2018, the US government used the law to target a Chinese defence procurement office and its director for "engaging in significant transactions" with Russia over its transfer of Su-35 fighter jets and S-400-related equipment to the People's Republic. US officials have also threatened to use CAATSA against the Nord Stream 2 pipeline project, and against India amid that country's plans to buy S-400s. Washington has not followed through on the latter two threats.

The Turkish president's remarks follow Monday's announcement by the Treasury that four Turkish officials and the Presidency of Defence Industries had been sanctioned, with restrictions including a "prohibition on granting specific US export licenses and authorizations for any goods or technology transferred" to the government agency.

Later, Secretary of State Mike Pompeo released a statement saying that Turkey remains "a valued Ally and an important regional security partner," and should "resolve the S-400 problem immediately" if it wants the sanctions lifted.

Earlier, Ankara dismissed the US justification for the sanctions - that the S-400 poses a threat to US and NATO aircraft and defence system, saying the claim was not based in reality. Turkey, Ankara said, had repeatedly proposed the creation of a technical working group with NATO's participation to look into the matter, but the proposal fell on deaf ears.

Turkey and Russia penned a $2.5 billion contract on the delivery of Russia's S-400 air defence system in late 2017, with Moscow offering Ankara a generous credit agreement for the purchase. The move eventually led the US to boot the country out of the Lockheed Martin F-35 fighter jet programme, setting back production schedules as the US defence giant scrambled to find other suppliers for the roughly 1,000 parts being produced by Turkish defence industries at the time. Turkey has since indicated that it would be turning elsewhere for its fighter jets.