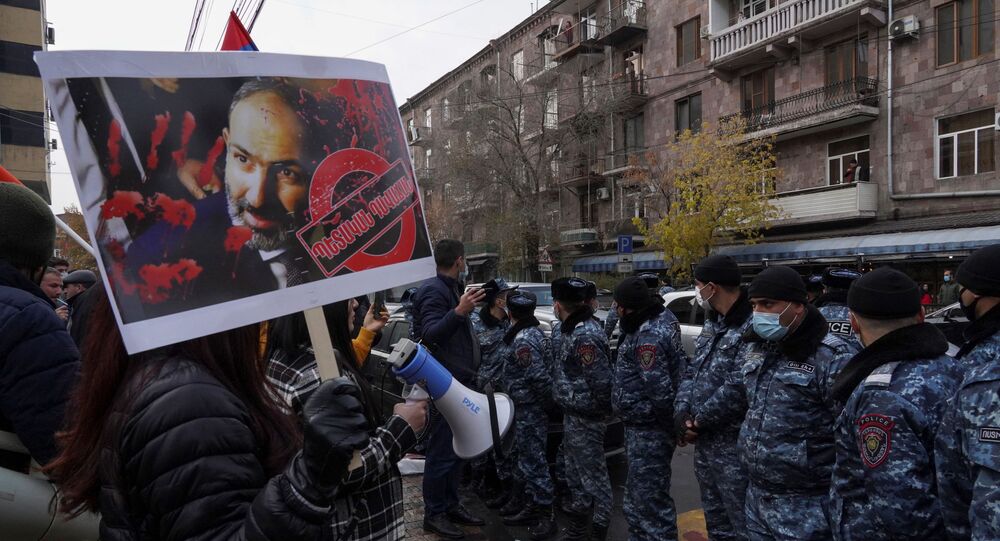 Mass demonstrations urging the Armenian prime minister to step down have been hitting the capital for the last month, since the signing of a ceasefire deal between Armenia and Azerbaijan, brokered by Moscow.

Several protesters calling for PM Nikol Pashinyan's resignation, have attempted to enter the government's headquarters in Yerevan, in order to talk with the politician. According to recent reports, police have detained at least 40 protesters.

Over the last week, demonstrators have clashed with police, and around 100 people have been detained by law enforcement.

Clash takes place in front of Armenian PM's office in Yerevan between police and demonstrators pic.twitter.com/JCbgbChu2p

Police in Yerevan are sending additional forces to the government building, where a demonstration is taking place demanding the resignation of the current prime minister pic.twitter.com/OePXtXrv7n

Protests have been rocking Armenia since the signing of a ceasefire deal on 9 November. Under the agreement, Azerbaijan took control of the city of Shushi and vast territories of the self-proclaimed Nagorno-Karabakh Republic. Moscow, which brokered the accord, sent 2,000 peacekeepers to Karabakh to ensure the ceasefire.

The conditions of the deal provoked a major backlash against Pashinyan, with the opposition party Dashnaktsutyun (Armenian Revolutionary Federation) demanding the PM's resignation.

The decades-old conflict between Baku and Yerevan reignited into a large-scale military standoff on 27 September, and continued for over a month, ravaging Nagorno-Karabakh - a predominantly Armenian-populated area that proclaimed independence from Azerbaijan back in 1991 and has since sought international recognition.