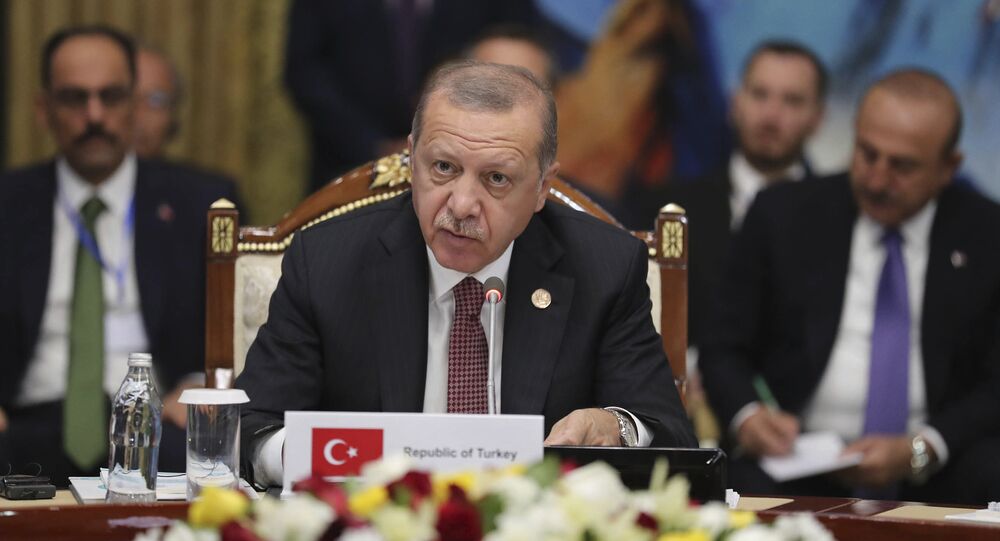 Relations between the two countries have drastically deteriorated in recent months over Macron’s comments on Islam and controversial caricatures of the Prophet Muhammad. However, the two countries also disagree on a number of issues, such as Nagorno-Karabakh, the war in Syria, and Turkey’s oil and gas exploration in the Mediterranean.

Turkish President Recep Tayyip Erdogan has expressed hope that France will soon get rid of president Emmanuel Macron, describing his counterpart as a "burden".

"Macron and France are going through a very dangerous period actually. My hope is that France gets rid of the Macron trouble as soon as possible", Erdogan said, speaking to reporters in Istanbul.

Over the years, Turkey and France have disagreed on a number of geopolitical issues; however, the discord has turned into a bitter feud in recent months.

A 'Religion in Crisis' and the Beheading of a French Teacher

At the beginning of October, Macron announced a plan to fight "Islamist separatism". In an emotional speech, the president said France, which has the largest Muslim minority population in Europe, faces a danger from Islamist separatism. The latter, he said, holds its laws above all others and often creates a "counter-society".

The government plan came in response to the numerous terrorist attacks that have occurred in France in recent years.

"Islam is a religion that is in crisis all over the world today, we are not just seeing this in our country", said Macron.

Several days later, Samuel Paty, a 47-year-old school teacher, was beheaded in a Paris suburb by a Muslim immigrant. The perpetrator killed Paty because he had learned that the teacher had showed his students caricatures of the Prophet Muhammad during a lesson on freedom of speech. The caricatures were published by the satirical magazine Charlie Hebdo in 2015 and caused a wave of indignation in Muslim countries as well as triggered a series of terrorist attacks in France that left 17 people dead and dozens injured.

Macron strongly condemned the murder of Samuel Paty, which he described as a terrorist attack and called the teacher a hero.

"We will continue, teacher. We will defend the freedom that you taught so well. [France] will not give up our cartoons”, Macron told the 400 guests who attended the memorial service.

Protests in Muslim Countries and Calls for Boycot of French Goods

This statement caused a wave of indignation and large-scale protests in Muslim countries, with demonstrators accusing Paris of attempting to repress Islam. Turkey was among several countries that urged for a boycott of French products, while President Erdogan advised Macron to get "mental checks".

"What is the problem of this person called Macron with Islam and Muslims?” Erdogan asked during a meeting with his Justice and Development Party. “What else can be said to a head of state who does not understand freedom of belief and who behaves in this way to millions of people living in his country who are members of a different faith? Macron needs treatment on a mental level”, said the Turkish leader.

© REUTERS / AKHTAR SOOMRO
A man steps on a picture of French President Emmanuel Macron during a protest against cartoon publications of Prophet Mohammad in France and Macron's comments, in Karachi, Pakistan October 27, 2020.

Paris described Erdogan’s statement as unacceptable and recalled its ambassador to Turkey for consultations. Macron later clarified his position. The French head of state said he personally does not support the caricatures and understands why they caused shock in the Muslim world.

"When I decided to attack radical Islam … my words were distorted. By the Muslim Brotherhood, quite widely, but also by Turkey, which has the ability to influence a lot of public opinion, including in sub-Saharan Africa. I am not attacking Islam, I am attacking Islamist terrorism", Macron said in an interview with Al Jazeera.

The rift between the two countries has been exacerbated by the fact that Paris and Ankara hold diametrically opposed views on a number of issues. They back different sides in Nagorno-Karabakh, Libya, and Turkey’s territorial dispute with Greece and Cyprus.