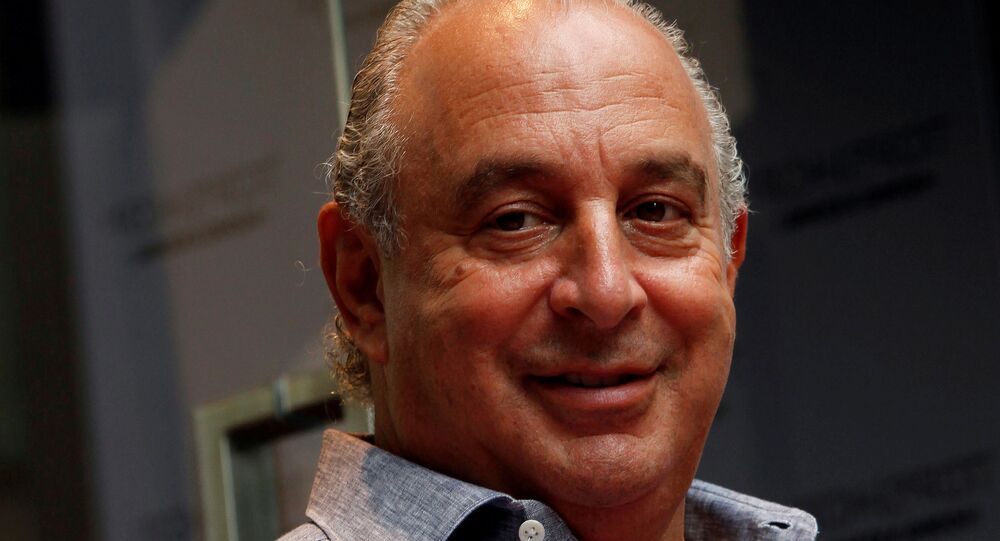 As UK's Arcadia Stands On Brink Of Abyss, Why Is Sir Philip Green ‘Unacceptable Face Of Capitalism’?

Arcadia, the retail chain which employs 13,000 people in the UK, is on the brink of administration. Earlier this year a film called Greed came out with Steve Coogan playing a businessman loosely based on Arcadia’s owner Sir Philip Green.

Sir Philip Green’s company owns 500 shops in Britain and employs 13,000 people but it has been hit hard by the COVID-19 pandemic, which came on top of years of decline as a result of increased competition from Boohoo, ASOS and other online clothes retailers.

It is not 'Topshop owner Arcadia group could collapse into administration within days', it's 'billionaire tax exile Sir Philip Green will let company in his wife's name fail, with massive hole in pension pot and risking thousands of jobs at Christmas time during a pandemic.'

Paul Myners, a former chairman of retail rival Marks and Spencer, told the BBC: "Covid has obviously been a significant factor but the truth is this group of brands has been haemorrhaging now for 15 years. It's become an insignificance. Sir Philip never really accepted the opportunity or challenge of online trading. He made no investment in that area at all."

It emerged on Friday, 27 November, that Arcadia needed to borrow at least £30 million to keep afloat but was struggling to persuade its creditors to lend it any more money.

I know there’s an entire generation who won’t quite understand this... but in my teens/20s spending HOURS with girlfriends wandering around Topshop and trying stuff on was the perfect day out. I mean, we could rarely afford it... but it was wonderful aspirational browsing.

If Arcadia goes into administration it will follow BHS, the department store chain which Sir Philip bought for £200 million in 2000 and sold 15 years later for just £1. BHS went bust the following year, leaving 10,000 employees out of work.

Sir Philip Green’s Arcadia Group, which owns Topshop, Burton, Dorothy Perkins and more, is reported to be on the brink of collapse. The Tory Cnut will walk away with everyone's pensions again and buy a new yacht and leave his ex workers in poverty @piersmorgan #GMB pic.twitter.com/imfdnzQtwy

​Green was knighted in 2006 “for services to the retail industry” and was dubbed the “King of the High Street” at around the same time but his reputation nosedived after he sold BHS and it then collapsed.

In July 2016 a damning report by a committee of MPs described Sir Philip as the “unacceptable face of criticism” and said he had left BHS on “life support” after he and his family had extracted £586 million in share dividends, rental payments and interest on loans.

Sir Philip bought Arcadia Group in 2002 and his wife, Tina, is the majority owner of parent company Taveta Investments.

© REUTERS
Retailer Philip Green speaks before Parliament's business select committee on the collapse of British Home Stores which he used to own, in London, Britain June 15, 2016.

The Sunday Times Rich List said the couple were worth £930 million, but much of that is said to be derived from a £1.2 billion dividend Sir Philip paid to his wife in 2005. As she is a resident of Monaco, she was not required to pay any tax on the dividend.

Green should be held accountable particularly for the £350m pension hole.

​A year ago Steve Coogan played Sir Richard McCreadie, a brash, charismatic and permatanned retail tycoon who is staging a gauche Gladiator-themed birthday party on Mykonos.

Coogan claimed the film was "not a direct attack" on Sir Philip but said: "He's a charismatic figure, it was a good basis on which to develop this movie idea."

If Arcadia collapses there will be questions asked in Parliament about government support for the retail sector and about the morality of a system which allows tycoons to withdraw large sums of money when their companies are profitable but not pay it back if they go bust.