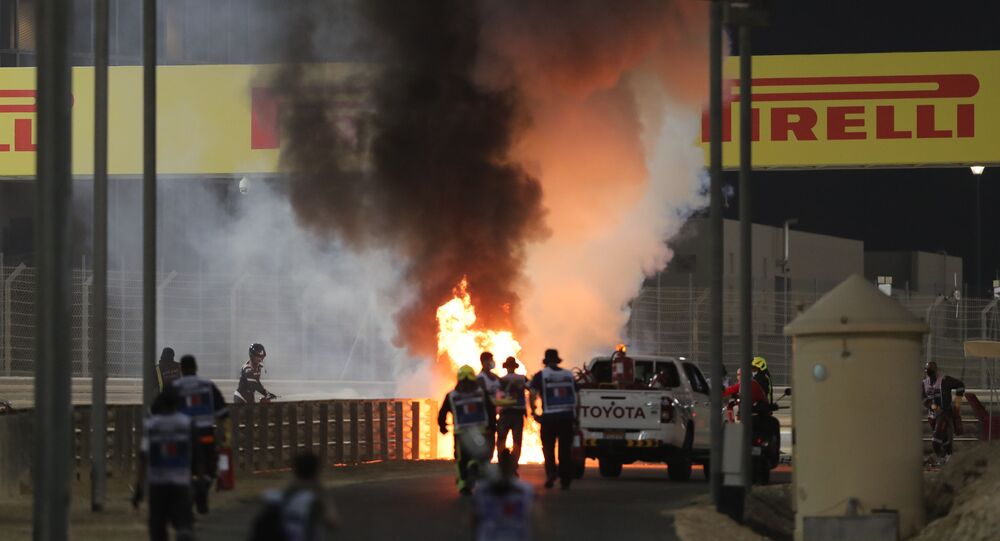 Grosjean’s car slid and clipped the front of another driver’s car during the race’s first lap in Bahrain. Despite his car piercing through a crash barrier at an estimated impact speed of 137 mph (220 kph) and splitting in two, sparking a huge fire, the driver did not even break a bone.

The 34-year-old French-Swiss, who races for the Haas F1 Team, sent a video message from the hospital, where he was immediately helicoptered and being kept overnight for observation, saying he is "OK".

He said: "I wanted to say I am OK. Thank you very much for all the messages," Grosjean said. "I was not for the halo some years ago but I think it is the greatest thing we have done in Formula One and without it I would not be able to speak to you today."

The driver only required bandages to treat his burned hands.

"Thanks to all the medical staff at the circuit and hospital and hopefully I can write you some messages."

An update from Romain himself. Pleased to see you’re in good spirits! We hope you make a speedy recovery 🙏 pic.twitter.com/njnjjH4GBi

​The incident occurred on the first lap as Grosjean's car was clipped by Danill Kvyat's AlphaTauri and then pushed towards the barriers.

"I'm just so grateful the halo worked, grateful the barrier didn't slice his head open or something like that, you know? It could have been so much worse," British racing driver for Mercedes, Lewis Hamilton said.

​“I want to thank the rescue crews who are very quick,” Haas F1 Team principal Guenther Steiner said. “The marshals and FIA people they did a great job, it was scary.”

The halo crash-protection system has been used during F1 races by the FIA since 2018. It consists of a curved bar surrounding the driver's head.​​