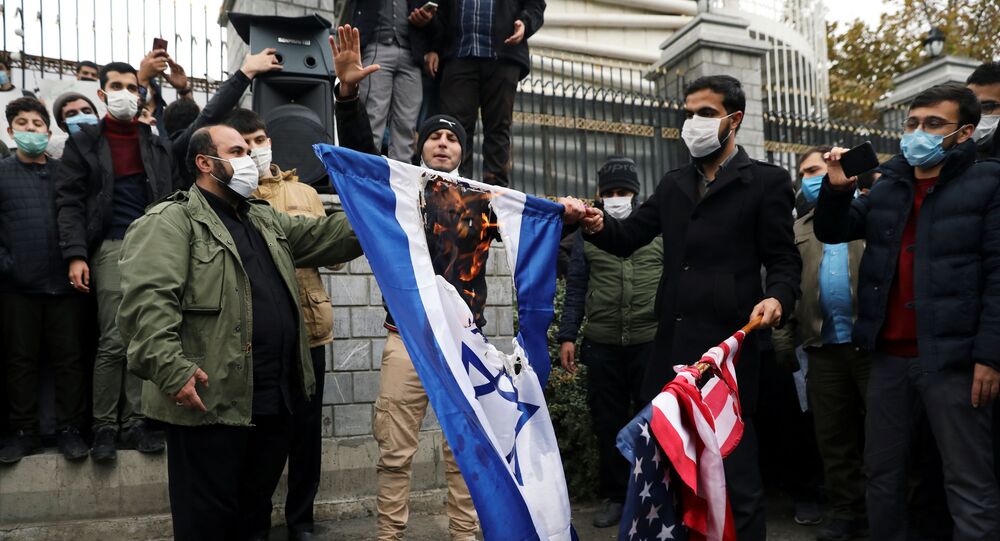 A wave of outrage and condemnation has swept Iran and the Middle East in the wake of the assassination of Mohsen Fakhrizadeh, an Iranian nuclear physicist and the head of the Iranian Defence Ministry's innovation centre; he was gunned down in his vehicle in the town of Absard in the Tehran region.

Students identified as members of the Basij, the paramilitary unit of the Islamic Revolutionary Guard Corps, burned Israeli and American flags in the Iranian capital Tehran on Saturday in protest over the assassination of the country’s top nuclear scientist, Mohsen Fakhrizadeh, reported AFP.

Guess this is the first (or one of the first) time(s) a picture of Biden is being set on fire in protest at the US, even before he takes office.
A gathering of hardline Iranians in Mashhad, warning against talks with Biden in the aftermath of #Fakhrizadeh assassination pic.twitter.com/b0YjeCTtgt

Small-scale protests were also reported in the cities of Mashhad and Qom, where footage provided by the Iranian Students News Agency (ISNA) showed demonstrators burning flags.

​On Friday night, a small demonstration broke out in Tehran outside President Hassan Rouhani’s residence, with protesters shouting “no to submission, no to concession with America, only war with America,” the New York Times reported.

🇮🇷 — VIDEO: Students of Iran’s Basij paramilitary burn American and Israeli flags in front of the foreign ministry in Tehran to protest the killing of top nuclear scientist Mohsen Fakhrizadeh.

Iran assassination update: Protests outside of Rouhani's residence by hardliners chanting "no submission, no concessions with the US only war https://t.co/D2qFtNhflA pic.twitter.com/MXMcqiILkJ via @farnazfassihi #Iran

​A boycott of all negotiations with Western powers was reportedly urged by the Union of Islamic Student Societies, until those behind the attack on Fakhrizadeh stand trial, with a military response demanded in response to the assassination of the physicist and General Qassem Soleimani. In January, the head of the IRGC’s Quds Force was killed in a US drone strike in neighbouring Iraq.

Iran blamed Israel for the death of the renowned scientist, with President Hassan Rouhani saying the killing of Mohsen Fakhrizadeh showed the “depth of the enemy’s despair, and vowing it “will not slow down Iran’s nuclear path”.

Meanwhile, a report in The New York Times similarly claimed, citing US intelligence officials, that Israeli agents had killed the Imam Hussein University physics professor in Tehran, who was also a member of the Iranian Revolutionary Guard.

Earlier, Iranian Foreign Minister Mohammad Javad Zarif said that there were “serious indications” of Israel’s complicity in the elimination of Fakhrizadeh. As Iran's Supreme Leader Ayatollah Ali Khamenei vowed to take revenge for the murder, Israel placed its embassies and delegations around the world on a heightened security alert level. The move came amid concerns over possible Iranian retaliation, reported Israel’s Channel 12 News on Saturday afternoon.

There has not been any official comment from Israel on the assassination of the Iranian scientist.

Mohsen Fakhrizadeh was killed in the city of Absard in Damavand County, Tehran Province; a truck carrying explosives hidden under a pile of wood detonated near his car and several assailants emerged from a nearby vehicle, riddling the famed scientist's car with bullets, according to local reports.

As a firefight erupted between the assassins and Fakhrizadeh’s bodyguards, the scientist was wounded and at least three of the guards were killed.

Although he was rushed to hospital by helicopter, Fakhruzadeh did not survive the attack. There has not been any official claim of responsibility for his killing.

The attack on Mohsen Fakhrizadeh, whom Israel had suspected of heading a secret Iranian military unit working on nuclear weapons, came ahead of the 10-year anniversary of the killing of Iranian nuclear scientist Majid Shahriari. That attack had also been blamed by Tehran on Israel, as well as a spate of other targeted killings. The assassinations coincided with the so-called Stuxnet virus, placed by a sophisticated espionage program that destroyed Iranian centrifuges and was similarly believed to have been contrived jointly by the US and Israel.

Israel has long accused Iran of secretly developing nuclear weapons, despite Tehran dismissing these allegations, insisting that its programme is peaceful.

Under the Trump administration, tensions with Iran spiralled after the US withdrew unilaterally from the Joint Comprehensive Plan of Action (JCPOA) in May 2018, claiming that Tehran was violating the provisions of the deal, and began to reimpose crippling sanctions on the country.

The JCPOA, which saw Tehran limit its enrichment of uranium in exchange for the lifting of economic sanctions, started unravelling as, in retaliation for the US move and in the wake of the killing of its top Iranian general Qassem Soleimani, Iranian President Hassan Rouhani’s administration stated the country would not observe the nuclear deal’s restrictions on fuel enrichment, on the size of its enriched uranium stockpile, or on its research and development activities.

“The Islamic Republic of Iran no longer faces any limitations in operations,” a state TV broadcaster said.

In the wake of the US presidential election, which has been projected by American media as won by Democrat Joe Biden, the issue of the nuclear deal with Iran has resurfaced. Biden’s campaign had hinted that their candidate may seek to rejoin or “renegotiate” the 2015 Joint Comprehensive Plan of Action nuclear deal with Tehran if their candidate were to win the battle for the White House.

Tehran, however, said while it will not sit down for talks on every single provision of the 2015 nuclear agreement, it is ready to return to the deal if the other signatories keep their side of the bargain.

Chief of Staff of the Iranian president Mahmoud Vaezi said on Wednesday that despite the remarks of the projected Biden administration officials about their policy towards Iran, which they claimed would be totally different from that of Trump, there has been no direct or indirect contact between Iran and the US, reported the Mehr News Agency.

Speaking on the sidelines of a Cabinet meeting on 25 November, Mahmoud Vaezi said:

"President Rouhani announced today that if the other JCPOA parties return to January 20, 2017, the day Trump came to power, Iran is also ready to step back to the same date."