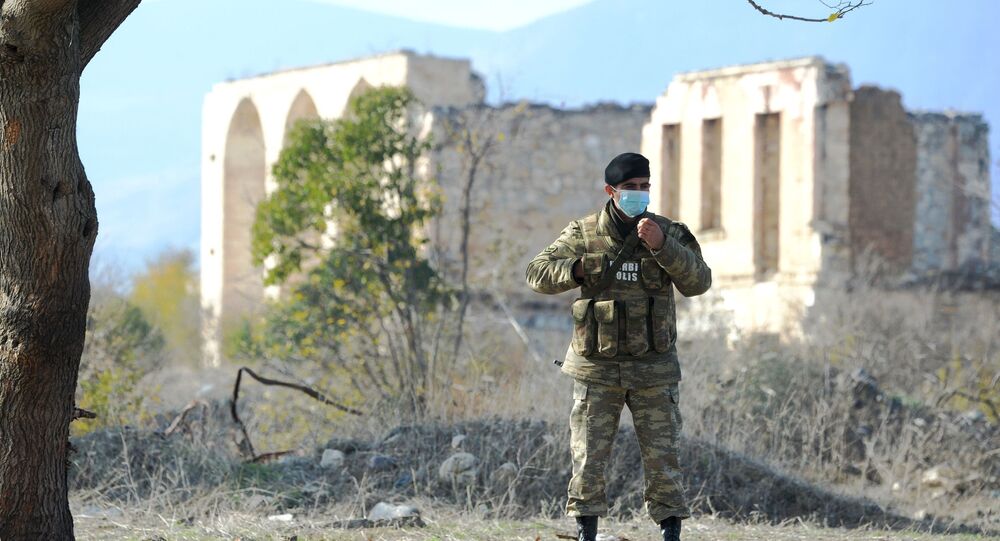 The transfer of the Agdam district to Baku was one of the conditions of a ceasefire deal on Nagorno-Karabakh concluded after the heads of Russia, Armenia, and Azerbaijan adopted a joint statement on the cessation of hostilities in the area earlier this month.

Azerbaijani President Ilham Aliyev has stated that Baku was planning a military operation in the Agdam district during an escalation of the conflict between Armenia and Azerbaijan over Nagorno-Karabakh.

During a speech in Agdam, which came under Baku's control in line with a trilateral statement on Nagorno-Karabakh, Aliyev said that "it is too early to reveal all the secrets of the war" and that "much will be clarified as time goes by".

"But today I can say that the [military] operation in Agdam was being planned", he added, referring to Azerbaijani forces' ability "to liberate" Agdam regardless of the ceasefire deal.

At the same time, the Azerbaijani president admitted that in the event of a military operation, "there would have been plenty of casualties".

The remarks come a few days after Aliyev said in an address to the nation that the three-sided Russian-Azerbaijani-Armenian agreement on ceasing hostilities in Nagorno-Karabakh is fully consistent with Baku's interests.

Commenting on the transfer of the Agdam district back to Azerbaijani control, Aliyev congratulated the area's residents, saying they would no longer be refugees.

The address was made in the wake of the signing of the Russia-brokered Nagorno-Karabakh ceasefire agreement between Azerbaijan and Armenia. The document, inked by Aliyev, Russian President Vladimir Putin, and Armenian Prime Minister Nikol Pashinyan, was agreed upon after nearly a month-and-a-half of brutal fighting between Azerbaijani and Armenian forces in Karabakh and the adjacent regions.

In line with the deal, Pashinyan agreed to withdraw Armenian forces from Nagorno-Karabakh as well as hand over a number of territories, including Agdam, to Azerbaijan.

He called the decision to sign the ceasefire agreement "extremely difficult" for him personally, but added that had the document not been signed, Armenia would have been much worse off.

© Sputnik / Iliya Pitalev
Ceasefire in Nagorno Karabakh: Key Points of Deal to Stop Hostilities Between Armenia and Azerbaijan
Under the accord, Russia deployed peacekeeping forces to the positions previously held by Armenia in the self-proclaimed Nagorno-Karabakh Republic (NKR). They were also stationed in the Lachin corridor, which connects the NKR's capital Stepanakert with Armenia.

Armenia earlier reported the deaths of more than 2,300 of its soldiers in the Nagorno-Karabakh conflict's latest escalation, while Azerbaijan has not yet disclosed its military losses.

The decades-old conflict escalated into full-blown fighting on 27 September, when Armenia and Azerbaijan accused each other of launching artillery, missile, and airstrikes in Nagorno-Karabakh, an Armenian-majority region, where tensions have been high since 1988, finally leading to the region declaring independence amid the disintegration of the Soviet Union in 1991.

Between 1992 and 1994, Yerevan and Baku fought a brutal war for the territory that claimed the lives of over 30,000 people and displaced at least 1.1 million others. Thousands more have been killed in the conflict's frequent flare-ups since then.