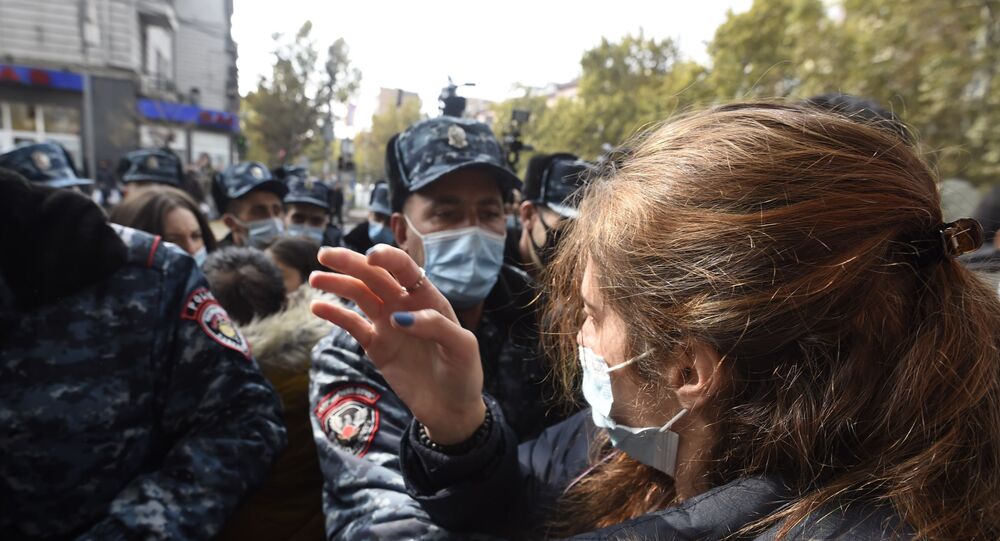 The Armenian opposition-led rally against the Nagorno-Karabakh ceasefire deal takes place as Russian Foreign Minister Sergei Lavrov has arrived in Yerevan to discuss the agreement with the Armenian leadership.

Sputnik is live from Yerevan as protests against the Nagorno-Karabakh ceasefire agreement continue in the Armenian capital, with demonstrators calling for the resignation of Prime Minister Nikol Pashinyan and the invalidation of the deal that secured territorial advances for Azerbaijan following six weeks of fierce fighting which is believed to have claimed as many as 5,000 lives.

The protests are held amid the Russian delegation's visit to the Armenian capital, where Foreign Minister Sergei Lavrov has underscored the importance of the ceasefire agreement, and stressed that all attempts to subject it to revision are unacceptable.

On Friday, Russian President Vladimir Putin said that those trying to slow down the implementation of the trilateral agreement between Russia, Armenia, and Azerbaijan on Nagorno-Karabakh must understand that the alternative to this deal is war.

The Russia-brokered ceasefire agreement provides for nearly 2,000 Russian peacekeepers to be deployed in Nagorno-Karabakh, an ethnic Armenian-majority region which proclaimed independence from Baku in 1991 but is still internationally recognised as part of Azerbaijan, for at least 5 years.