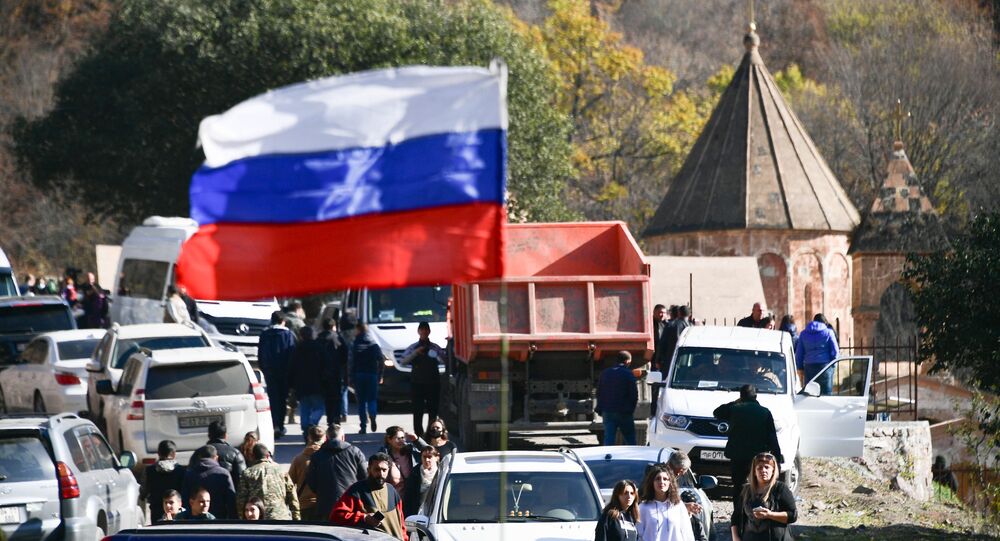 MOSCOW (Sputnik) - More than 80 percent of Armenians have a positive attitude toward Russia and see the country as an ally, a poll for Radio Sputnik revealed, a week after the nation struck a Moscow-brokered ceasefire deal with Azerbaijan.

Of those surveyed Armenians, 83.8 percent said that they have a positive attitude to Russia, while 9.4 percent expressed their negative attitude. Another 6.8 percent were unable to give a definitive answer. The poll was conducted by MPG, the exclusive representative of the GALLUP International Association in Armenia.

Russia also topped the list of friendly nations on whose support Armenia could count in difficult times, with 62.3 percent of respondents mentioning this country. Russia was followed by France (39.9 percent), neighbouring Iran (6.4 percent), the United States (5.8 percent), Germany (1.2 percent) and Georgia (0.6 percent). A total of 4.6 percent were unable to give a definitive reply.

As for military assistance or political support, the majority of Armenians would be ready to accept it from Russia (79.6 percent). Armenians would also welcome assistance from France (14.4 percent), Iran (6.8 percent), the US (5 percent) and Germany (0.4 percent). Slightly over 12 percent mentioned other countries, and 7.4 percent did not provide a clear answer.

1 / 4
© Sputnik
Who do Armenians view as their allies?

The poll was conducted in Armenia by phone among a sample of 501 respondents on 17 November. The sampling margin of error does not exceed 4.3 percent

Last week, Armenia and Azerbaijan agreed to the Russia-brokered ceasefire in the disputed Nagorno-Karabakh region, following a 1.5-month armed conflict. Under the deal, Azerbaijan retains control of the territories it captured during the conflict, and Russia is to deploy peacekeepers along the line of contact of the warring parties and to the Lachin corridor connecting Nagorno-Karabakh with Armenia. The Russian peacekeepers are also tasked with facilitating the return of refugees.