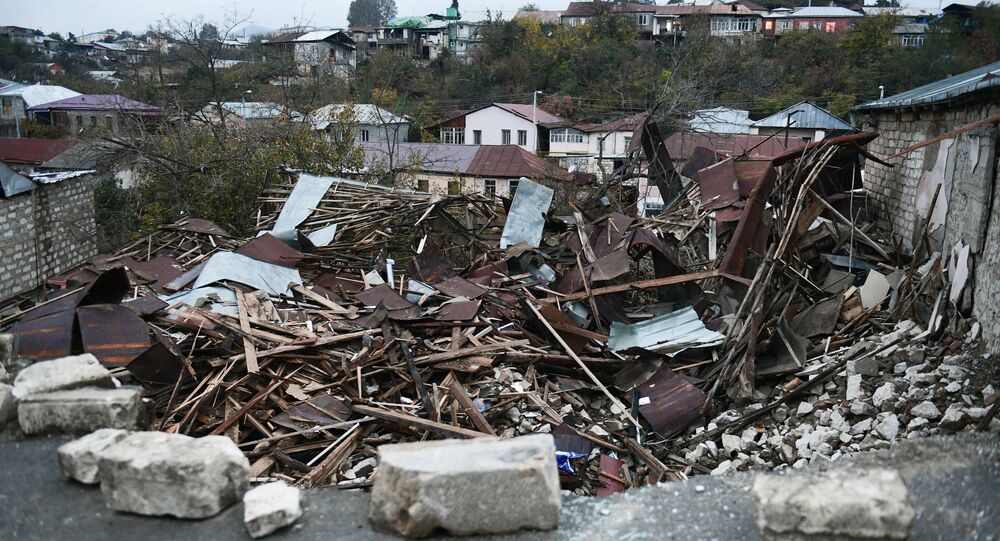 BAKU (Sputnik) - Azerbaijani President Ilham Aliyev has said Armenia will be held responsible for the destruction of infrastructure in the territories of the unrecognised Nagorno-Karabakh Republic that have come under the control of Azerbaijan.

"The enemy destroyed the entire infrastructure. They will answer for everything in an international court. I said and I want to repeat again that international structures, experts will be involved, all the damage will be calculated, and we will demand compensation for 30 years. These days they destroyed Kalbajar, houses, forests. They will also answer for all this", he said. Fragments of the president's speech have been posted on a social network by his wife.

Aliyev on Monday visited the districts of Fuzuli and Jabrayil, now under the control of the Azerbaijani Armed Forces.

On 10 November, the heads of Russia, Azerbaijan, and Armenia - Vladimir Putin, Ilham Aliyev, and Nikol Pashinyan - signed a joint statement on the complete cessation of hostilities in Nagorno-Karabakh.

According to the statement, Armenia and Azerbaijan are to stop at their occupied positions, a number of districts will come under Baku's control, the sides will exchange prisoners, and Russian peacekeepers are to be deployed along the contact line and the Lachin corridor connecting Karabakh with Armenia.

Pashinyan said the decision to sign the agreement had been extremely difficult for him. According to him, if the document had not been signed, it would be much worse for Armenia. Aliyev called the signing of the statement a surrender by Armenia.