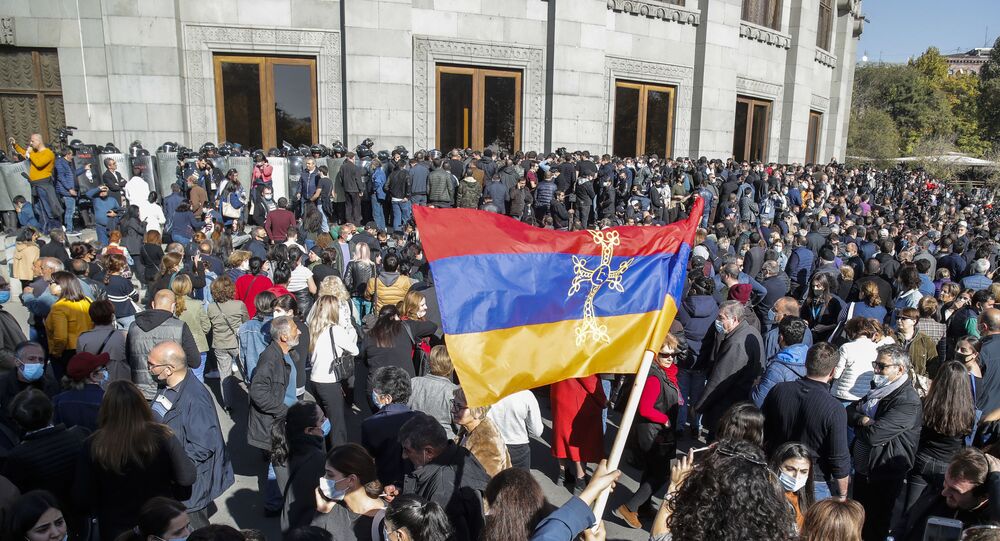 On Saturday, Armenia's National Security Service announced that it had foiled an assassination attempt on Prime Minister Nikol Pashinyan by his political opponents who were preparing to "usurp the power" amid ongoing tensions over the Nagorno-Karabakh ceasefire deal, which requires Yerevan to hand over Armenian-populated territories to Azerbaijan.

Sputnik is live from Yerevan as protests against the Nagorno-Karabakh ceasefire agreement continue in the Armenian capital, with demonstrators calling for the resignation of Prime Minister Nikol Pashinyan and the invalidation of the deal that secured territorial advances for Azerbaijan following six weeks of fierce fighting.

The rally was organised by 17 opposition political parties.

Earlier this week, Pashinyan, who has already said that he has no plans to resign, explained that he had no choice but to sign the agreement to prevent further territorial losses, describing the situation as disastrous.

The Moscow-brokered ceasefire deal provides for nearly 2,000 Russian peacekeepers to be deployed in Nagorno-Karabakh, an ethnic Armenian-majority region which proclaimed independence from Baku in 1991 but is still internationally recognised as part of Azerbaijan, for at least 5 years.