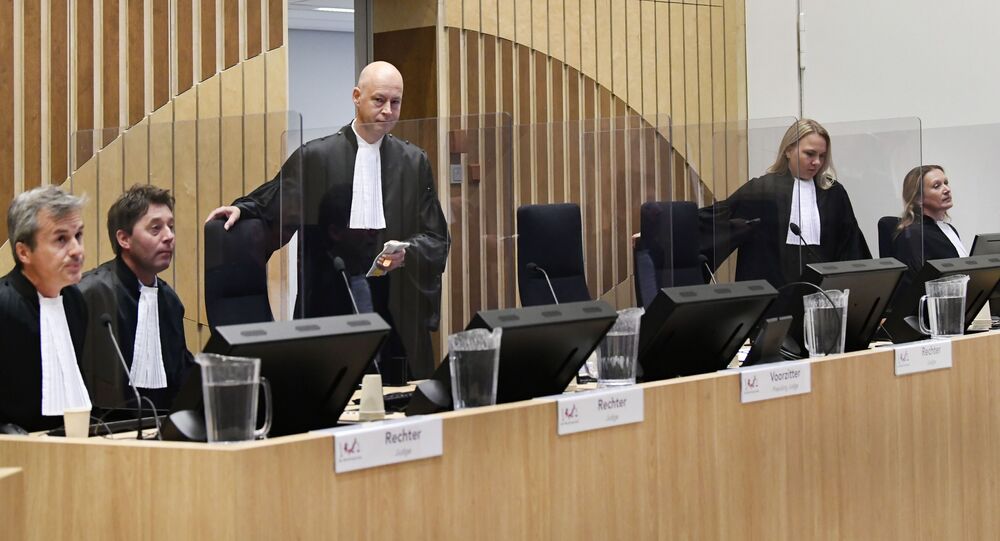 MOSCOW (Sputnik) - The European Court of Human Rights is not expected to rule on whether Russia infringed on its international obligations in the case of the 2014 downing of a Malaysian airliner in Ukraine until the criminal trial is completed in the Netherlands, a Dutch prosecutor investigating the crash said Friday.

The defence team for one of the suspects accused of a role in firing a Buk missile at the plane had asked the court whether the public prosecution had forfeited its right to prosecute by sharing information from the criminal case with the Netherlands, which then lodged a state complaint against Russia with the ECHR.

"One does not expect that the ECHR will make a decision on the facts any sooner than your [Dutch] court," Dutch public prosecutor Thijs Berger told the judges at a hearing, which continued at a judicial complex near Amsterdam this week.

© REUTERS / Maxim Zmeyev
A member of self-defense unit stands at the crash site of Malaysia Airlines flight MH17, near the village of Hrabove (Grabovo) in Donetsk region, Ukraine. (File)

Malaysia Airlines Flight MH17 crashed in eastern Ukraine on the way from Amsterdam to Kuala Lumpur in July 2014, killing all 298 people aboard. The crash is being investigated by the Dutch-led Joint Investigation Team (JIT), which claims that the aircraft was downed by a Buk missile originating from the Russian armed forces. Three Russians and a Ukrainian were put on trial in absentia. Moscow has rejected the accusations, calling them baseless and regrettable. Russia has said that the JIT ignored the information Moscow gave the Netherlands — the radar data and documents proving that the Buk missile that hit the Boeing belonged to the Ukrainian government forces.